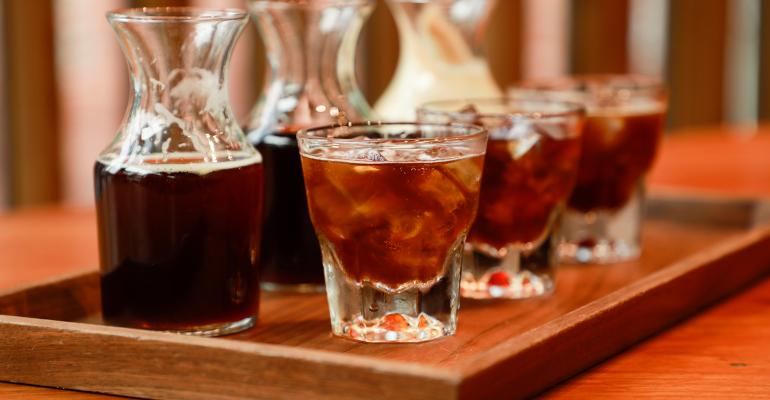 Starbucks Corp. is getting colder.

The Seattle-based coffeehouse operator has developed a process for making a shot of cold-pressed espresso to be used as the base for a potential line of cold espresso beverages.

The cold-pressed espresso beverages will debut at the premium Starbucks Reserve Roastery in Seattle, the company said on Tuesday.

The cold-pressed espresso provides the 27,000-unit chain with another tool in its effort to sell more iced drinks, highlighted by last year’s introduction of Nitro Cold Brew, which is now available in 1,000 U.S. locations.

“This new technique, which produces a dense shot of cold-pressed espresso, is the next step in our cold coffee journey, and is the perfect ingredient to design a menu of cold espresso or coffee options,” Starbucks CEO Kevin Johnson said in a statement. “We believe the opportunities are limitless.”

The company developed what it calls Aqua Tamp Technology, which uses an ascending flow filtration system pressurized by cold water.

Traditionally, espresso is made quickly, with a fine grind of coffee, hot water and downward pressure. But Starbucks’ new process uses a coarse grind and cold water steeped for 45 minutes, then filtered with intense, upward pressure.

“Our R&D team flipped traditional brewing on its head and found another way to deliver something even more extraordinary,” said Andrew Linnemann, vice president, global coffee, tea and roastery for Starbucks.

The process allows for a “precise release of flavor characteristics” that results in “a dense concentration of cold espresso,” the company said, translating to a smoother shot of cold-pressed espresso.

Last year, Starbucks said it would quadruple its Cold Brew business by 2021. The company also wants to increase its cold beverage mix from 35 percent in 2013 to nearly 50 percent by 2021.

Cold brew sales have skyrocketed in recent years, growing 338.9 percent from 2010 through 2015, according to Starbucks and the market intelligence firm Mintel. Iced coffee consumption has grown 75 percent over the past decade.

Beverages have been an increasingly important focus of competition in the restaurant industry. Starbucks in the U.S. is fending off growing competition from McDonald’s, which recently unveiled its own expansion of its McCafé line of beverages, as well as Dunkin’ Donuts and the growing Tim Hortons brand.