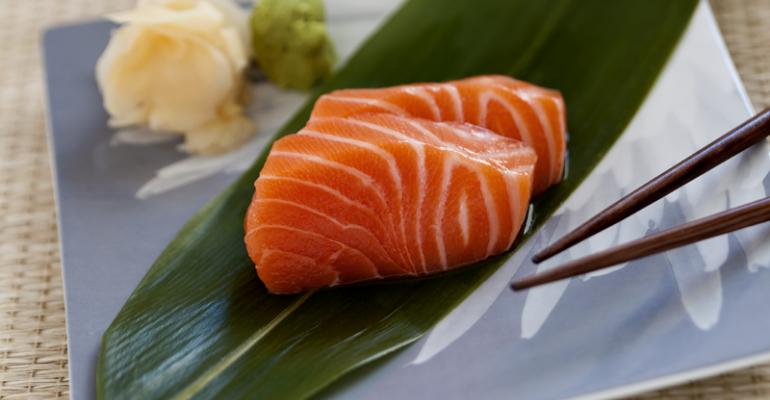 As aquaculture practices improve, operators see cultivated fish and shellfish as part of the sustainability equation

When Michael Chernow founded casual-dining seafood chain Seamore’s in 2015, it was conceived as a place to serve a daily-changing menu of local fish and shellfish. Farm-raised seafood, apart from oysters, wasn’t on the agenda.

But that has changed as Chernow and the five-unit chain’s CEO, Jay Wainwright, came to understand the bigger picture of seafood and sustainability. Local seafood from healthy fisheries is great, but it can’t meet the growing demands for the nutritious, tasty and low-carbon-footprint protein that seafood provides. So now, apart from the “Daily Landings” on the menu of whatever Seamore’s suppliers provide from nearby waters, guests also get local steelhead from a landlocked recirculating aquaculture system, or RAS, from upstate New York and shrimp rated green (best choice) or yellow (good alternative) by the Monterey Bay Aquarium’s Seafood Watch program.

“We actually think it’s the right thing to do, because it’s the way of the future,” Chernow told NRN in 2019, shortly after the chain started selling the aquaculture products.

He was joining a growing chorus of sustainability advocates who say responsible aquaculture is an important aspect of feeding seafood to a growing population without depleting our oceans.

Todd Mitgang, the chef and owner of two-unit Crave Fishbar, also in New York City, has a similar outlook. He prides himself on offering only sustainable seafood at his 10-year-old concept and partners with the Monterey Bay Aquarium and the James Beard Foundation’s Smart Catch program — verifying his purchasing practices — to do that. Currently on his menu is wild yellowfin tuna as well as farm-raised Faroe Islands salmon, barramundi from a farm in Vietnam that has been certified by the Aquaculture Stewardship Council (ASC), and, as of two months ago, striped bass raised in Mexico that has gotten four stars — the top rating — from the Best Aquaculture Practices association.

“We are a sustainable seafood restaurant,” Mitgang said. “For a long time we were not using striped bass because the fishery was not in good health. … Wild is not always the sustainable option. So aquaculture has been important to me because it speaks to the [Crave] brand … and for the farms that we choose to work with.”

And also delicious. Although farm-raised salmon used to be leaner and less rich than wild salmon, now, as farming practices have improved, the opposite is often the case. In fact, when Crave customers ask for their salmon to be cooked through, rather than served medium-rare as suggested, he complies with their request, but it’s often sent back to the kitchen anyway because it’s still so moist.

“Now we’ve realized that medium-well is cooked through [in the minds of customers] and well-done is five minutes longer. Well-done is dry,” he said.

Most recently Mitgang has served the salmon seared and then oven roasted with watercress-sunflower seed pesto, early heirloom tomatoes and roasted sweet potatoes.

The new striped bass is served as a fillet dusted in rice flour and cornmeal with a sauce of ginger, garlic, Shaoxing wine, jalapeño and roasted Fresno peppers, fish sauce and lime juice. It’s accompanied by a side salad of shaved asparagus, watermelon radish, cucumber, red onion and roasted cashews.

Abe Ng, president, CEO and chief sushi officer of Sushi Maki, a 25-unit chain based in the Miami area, also uses farm-raised salmon from the Danish Faroe Islands as well as Norway and Scotland, and says the “icy, cold, pristine waters,” result in fatty fish that’s great for sashimi.

He said that wild Alaska salmon is appropriate for smoking and grilling, but farm-raised North Atlantic salmon “is the best” for eating raw.

His shrimp is ASC certified from farms in Southeast Asia, and produced by Thai Union, which also owns the Red Lobster casual-dining chain.

“The supply chain is third-party verified,” he said. “We have auditors that come every year, check our paperwork [to make sure it’s all ASC certified], and then send auditors to restaurants to make sure that there’s no swapping.”

“When everyone’s linked together with this transparency, and everyone down the supply chain checks, it really provides a verifiable claim. I think that’s important,” he said.

About half of all seafood consumed globally is farm-raised, according to the National Aquaculture Association — a figure also cited by Seafood Watch — including the vast majority of shrimp and salmon and a growing proportion of finfish and bivalves, such as oysters and clams.

And many aquaculture productions are now good stewards of the environment, a Seafood Watch spokesperson said via email.

“In fact, by production volume, the majority of the aquaculture operations we have assessed rate as ‘Best Choice,’” the spokesperson said.

A lot of that is seaweed and bivalves, but “some shrimp and salmon farms are making real progress toward sustainability as well,” they added.

Oysters are not merely sustainable; they’re restorative. They filter impurities out of the water where they’re raised, making for clearer waters and a generally more pristine environment, and also reduce nitrogen levels, which helps prevent toxic algae blooms. 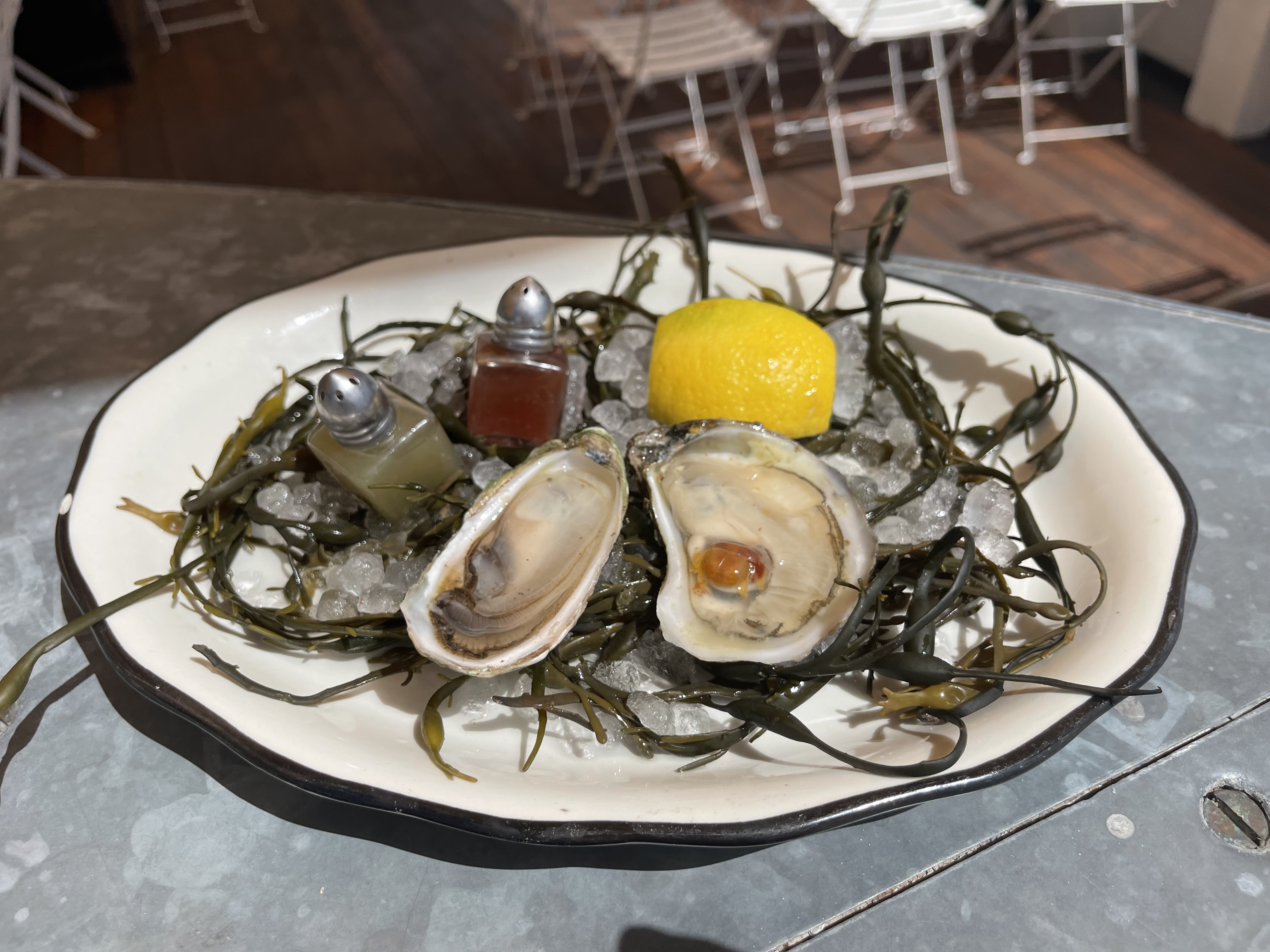 Kerry Heffernan sells 5,000-6,000 oysters a week at Grand Banks, including some he raises himself.

Kerry Heffernan, the executive chef of the hospitality group Crew, which operates five restaurants near the New York City coastline, or in actual boats, as well as Seaworthy restaurant in New Orleans, said he sells 5,000-6,000 oysters a week at Grand Banks, a restaurant on a boat docked at Manhattan’s Pier 25, including some he raises himself from his dock in the Long Island community of Sag Harbor, N.Y., and serves with a ramp mignonette dispensed out of salt shakers to reduce waste.

He also menus steelhead from the RAS upstate. “They have no impact in terms of water or feed” on the ocean, he said, because the only fish meal they use is converted from scrap such as bones and heads from fish processing facilities.

“It’s a much friendlier mix for the environment,” he said, as is the fact that the fish is raised in the Hudson Valley, meaning transportation costs are lower to big markets in New York and New England.

Heffernan serves it with orange zest, a dill coulis and roasted root vegetables. 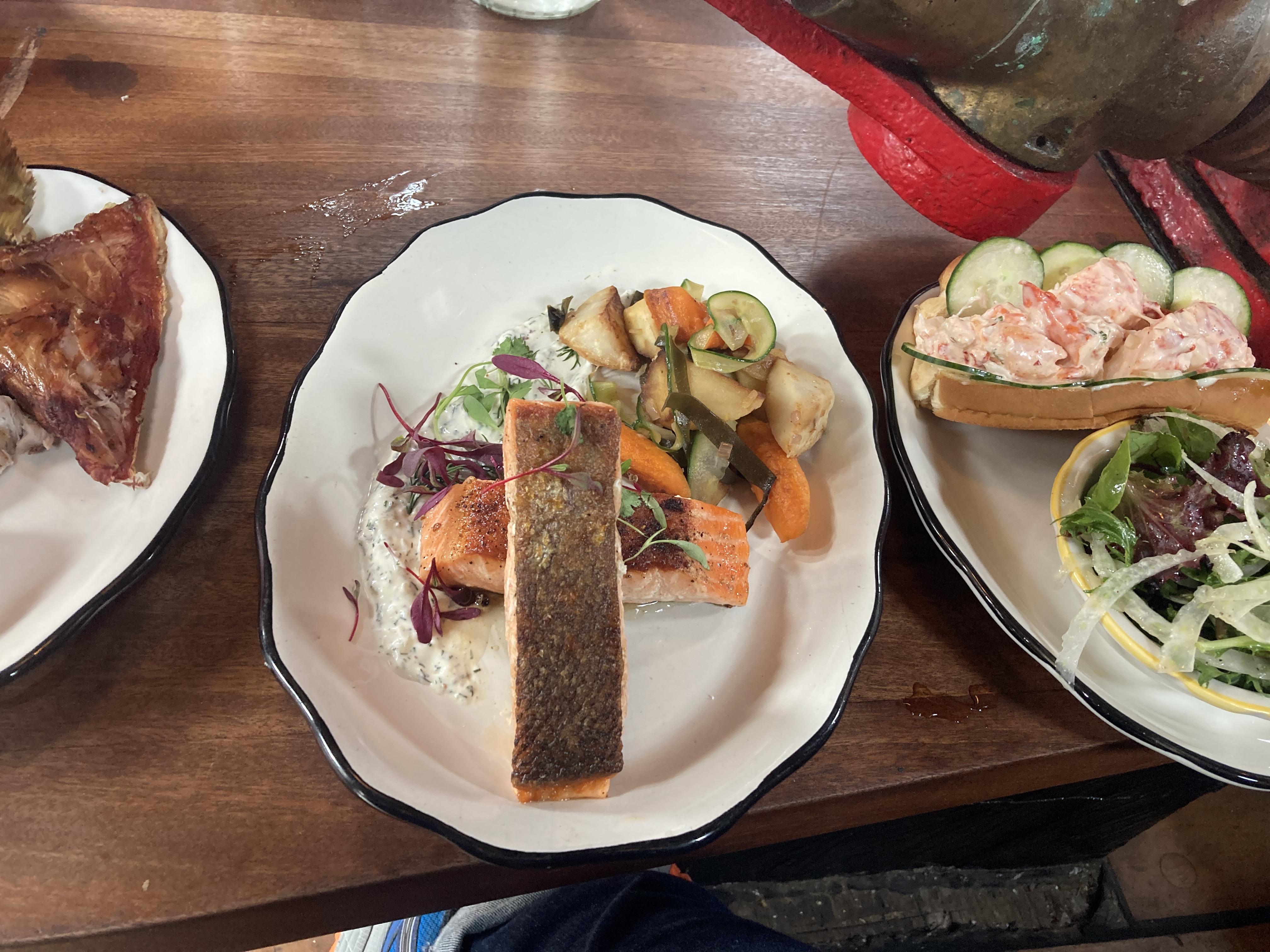 Although more chefs are onboard with incorporating farm-raised seafood into their repertoires, not all consumers have gotten the memo.

“I think there is a growing acceptance [among consumers],” Ng said. “But the first thing [some] people ask is, ‘Is this wild caught?’ And that’s not necessarily the best in terms of being a good global citizen environmentally.”

Mitgang also has faced that at Crave.

“There are people who are almost obnoxious when they say ‘wild only,’” he said. “The people who are ‘wild wild wild,’ they’re not interested [in hearing about aquaculture] and it’s tough to even start that conversation.”

But other customers who are actually curious about why Crave makes the purchasing decisions that it does.

“They’re willing to lend an ear,” he said.