/sites/all/themes/penton_subtheme_nrn/images/logos/footer.png
Recent
Recent
What the January jobs numbers mean
Feb 06, 2023
NRN editors discuss KFC’s new wraps, McDonald’s earnings and marketing, and TikTok
Feb 03, 2023
January was a strong month for restaurant hiring
Feb 03, 2023
Why data is crucial for both guests and employees, Freddy’s COO says
Feb 03, 2023
What the future of equipment looks like
Feb 03, 2023
Featured
The emergence of mocktails
Jan 23, 2023
36 restaurant industry predictions for 2023
Dec 21, 2022
10 restaurant chains making waves in the breakfast space
Dec 14, 2022
How eco-friendly Seattle restaurant chain Just Poke is doubling in size in 2022
Nov 17, 2022
Menu Tracker
brought to you by
Menu 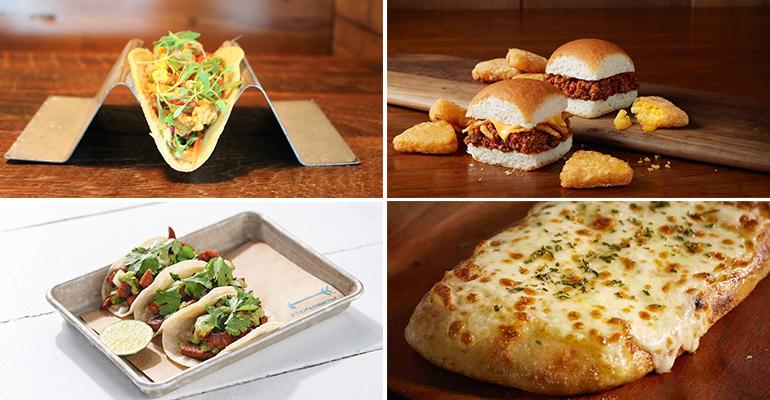 In efforts to boost holiday cheer, and no-doubt checks as well, a number of chains are adding new alcoholic beverages to its menu, including Bonefish Grill, which has a new signature white wine blend, Bad Daddy’s Burger Bar, which has a couple of new cocktails, Hot Head Burritos, which has a proprietary Margarita-like drink with MTN Dew, and Curry Up Now, which has a whole lineup of low-alcohol drinks.

Fresh Brothers is selling lasagna by the trayful for the holidays, Cotton Patch Café has out together holiday feasts for up to ten people, and Veggie Grill has DIY tamale kits.

Velvet Taco, as it does every week, has a weekly taco feature — this one featuring fried oysters — and Voodoo Doughnut is celebrating Hanukkah with its version of celebratory sufganiyot, or jelly doughnuts.