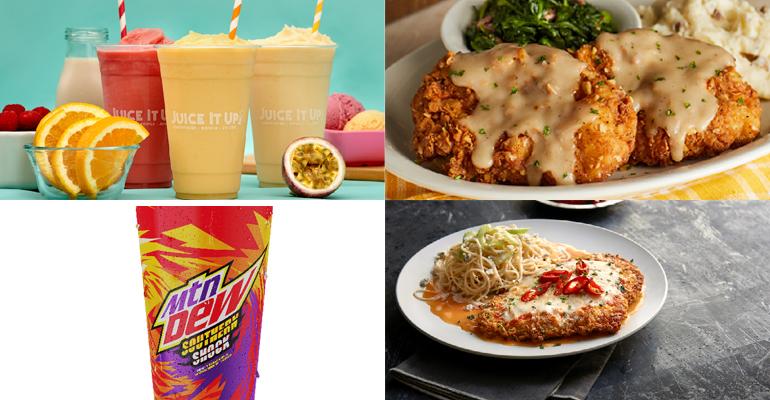 Believe it or not, there are more chicken sandwiches to be launched at the American public. Cowboy Chicken has rolled out a version with Buffalo sauce. In a similar vein, Romano’s Macaroni Grill is bringing back its Buffalo Chicken Parmesan which, to complete the flavor palette, comes with a side of pasta in Gorgonzola sauce.

Buffalo Wings & Rings isn’t launching any new chicken items, but it does have two new sauces, and now it’s also allowing customers to order those sauces in flights of three.

Bojangles, fresh off of a rebrand in which it ditched its apostrophe, has a new tropical punch soda, and Juice it Up! has three new smoothies with added protein, which it’s touting as an immunity booster.

Mooyah Burgers, Fries and Shakes has a new campfire themed burger-and-shake combo, while Smashburger is celebrating its Colorado origins by offering the burger it created for that state to guests nationwide. Bad Daddy’s Burger Bar, meanwhile, is offering a new meatless burger.

Baskin-Robbins has a new coffee shake of sorts, Quiznos has a Cubano, and Salata has a new spicy avocado dressing.

Cracker Barrel has dropped some menu items (although it won’t say exactly which ones), but it also has also added a few.

Tim Hortons is the latest chain to team up with Froot Loops for a doughnut, and Velvet Taco, once again, has its weekly taco feature.