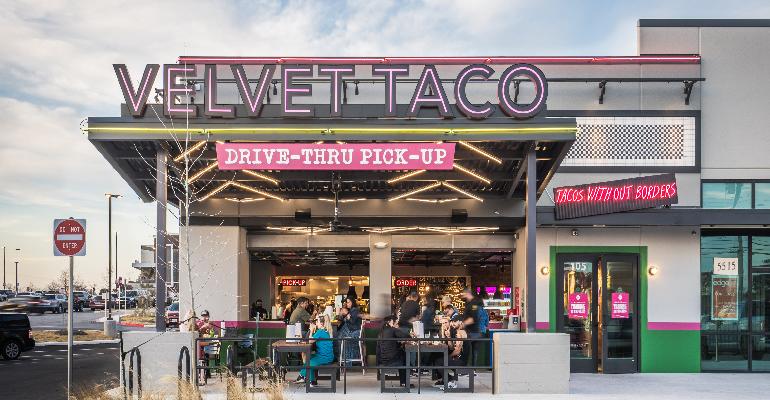 Dallas-based fast-casual chain Velvet Taco launched a new merchandise line of clothing and accessories the brand announced Monday. The line will be available exclusively on the chain’s new website, Velvet Merch, and comes on the heels of the announcement that the emerging concept would be launching its first-ever loyalty app called The Velvet Room.

“We like to create walking billboards,” said Velvet Taco’s marketing director Cassie Cooper. “It’s not about a new revenue stream, it's really to help create experiences and make sure that our that our guests can walk out feeling like they are part of something deeper than just a taco.”

Cooper said that after 11 years, the chain decided it was the right time to give customers what they had been asking for and open a merchandise store to allow Velvet Taco clothing and accessories to be shipped across the country to longing fans.

“We get the request [for merchandise] probably one or two times a week and that's pretty substantial for a restaurant brand,” Cooper said. “So when they leave the four walls of our restaurant, we want to make sure that they've got something that they can remember us by.”

The launch, coming on the heels of the loyalty app developed in collaboration with Thanx, was not accidental. In fact, now that the chain has access to the customer data, it’s planning on using that to boost its store footprint and reward its loyal customers.

“It made a ton of sense now that we have this experiential loyalty program to layer in a merch line to help kind of kind of surprise and delight [customers],” Cooper said.

The plan is to launch seasonal merchandise and add plenty of new clothing or home good items as the line matures, along with trending items, according to Cooper.

“We're trying to get a taco into the palm and/or on the backs of our consumers any way possible,” she said.

The initial line of merchandise consists of mostly t-shirts with Velvet Taco expressions, as well as stickers, pens, cups, a backpack, a tumbler and a sweatshirt — the “high demand” items as Cooper calls them.

“I wanted to make sure that we had a good read and pulse on demand before we went all in with everything,” she said.