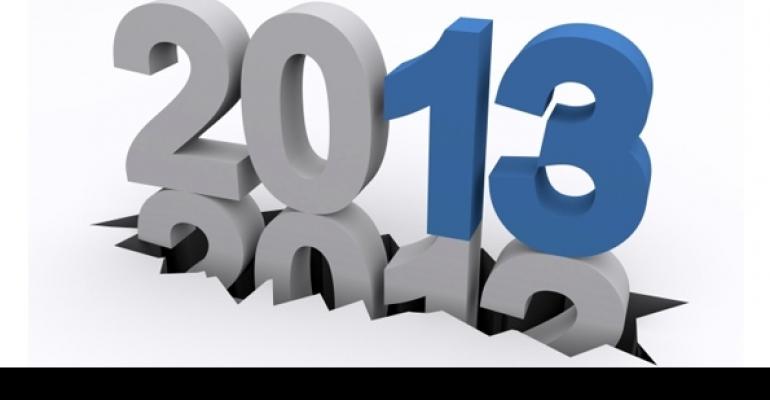 What's ahead for the restaurant industry in 2013

NRN editors take a look at menu, marketing, finance, technology and other trends expected for the restaurant industry in 2013.

As operators prepare for yet another busy year ahead, editors at Nation’s Restaurant News predict what's ahead for the restaurant industry in 2013.

Emotional swings: As in 2012, consumer confidence will ebb and flow in 2013. Continuing fiscal distress in the U.S. and abroad will keep folks on edge and businesses cautious. High unemployment and job fragility will quash the optimism — and spending — consumers clearly would rather enjoy.

Value push: Price wars are heating up. We’ve seen 55-cent Whoppers from Burger King, 99-cent Loaded Grillers from Taco Bell, and $1 drinks and ice cream at Checkers and Rally’s. At McDonald’s, $1 Snack Size Fish McBites and $1 Grilled Onion Cheddar Burger loom on the horizon. Sure to follow in 2013: Increased friction between franchisors and franchisees as margins shrink.

Operator silence: Restaurant operators learned in 2012 that political discourse hurts sales, so we’ll hear less of it publicly in 2013. Behind closed doors, however, health care reform will remain a leading cause of headaches. Another cause: growing cries for unionization as advocates take advantage of the industry’s bruised image.

Dialing up dollar menus: Two of quick service’s largest brands, McDonald’s and Wendy’s, recently indicated that their value menus would be key traffic drivers. Other fast feeders may follow suit, but the watchword with franchisees will be “profitability.” Wendy’s said it would work with franchisees to develop more margin-friendly items for its Everyday Value Menu, and McDonald’s franchisees approved the addition of two items to the Dollar Menu while rejecting a plan to sell hamburgers and cheeseburgers for 69 cents and 89 cents, respectively.

Charging into China: Even though Yum! Brands Inc. warned that its same-store sales in China would take a rare dip in the fourth quarter, the parent to KFC and Pizza Hut is leading a continued rush of Western brands to the country. Yum, having beaten most competitors to China’s booming coastal cities, will start expanding more into the nation’s interior provinces, while Starbucks aims to have 1,000 locations there by the end of 2013. Smaller, upstart brands like health-focused Freshii are breaking into China as well.

Ramping up remodels: Remodeling has been a key strategy for several major chains looking to engineer sales increases without drastically changing their menu or marketing plans. McDonald’s will continue its reimaging efforts, while Bob Evans and Wendy’s are accelerating their remodeling plans after tasting success with their initial wave of upgrades. Buffalo Wild Wings remodeled an Ohio location to better reflect the social atmosphere of a stadium, and the format will reappear several times in 2013 in remodels and new builds.

Ethnic fast-casual boom: Mirroring the rest of the country, consumers in the Southeast remain financially squeezed by the economic downturn. As such, fast-casual options — especially those with unique, upscale flavor profiles — will continue to grow. Mediterranean, Latin American and Asian fast-casual chains should see success in 2013.

Casual-dining refresh: In 2012, Darden Restaurants Inc. and Ruby Tuesday Inc. both struggled to maintain market share and same-store sales growth. With new leadership at Ruby Tuesday and a renewed sense of urgency at Darden, the Southeast will become a testing ground for promotions and operations that they hope will make the casual-dining segment relevant once again. Whether their new strategies will succeed, of course, won’t be evident until later in the year.

Immigration reform: This year will likely see the immigration issue back on the table at the federal level. President Obama discussed it during his re-election campaign and received overwhelming support from the Hispanic community in the United States. While little action is expected at the state and local levels, U.S. lawmakers on both sides of the aisle also have voiced interest in pursuing a solution to the long-standing problem. Many foodservice operators favor a path to citizenship along with more secure borders.

Focus on labor issues: The foodservice industry, working with other businesses, has been successful in pushing back several workforce policy issues, including the poster rule, ambush elections and card check. However, organizers have already begun to target the restaurant industry, as seen in the highly publicized one-day strike in New York City that picketed quick-service chains including McDonald's, Burger King and Wendy's. More such actions have been promised in 2013.

Interesting dishes: With beef and other corn-related items expected to rise in price, we’ll see chefs and research-and-development folks get creative with more off-the-beaten path ingredients. Rotisserie octopus anyone?

Menu pricing pressure: We saw the pricing dance in 2012 and it will continue next year. Restaurant operators will feel the need to raise menu prices to address high commodity and oncoming health care costs, but they will hold off as long as possible to let their competitors tweak pricing first to see how consumers respond.

Teatime expands: Starbucks will continue to teach the tea-loving Chinese to drink coffee. At the same time, coffee-loving Americans will return to their roots of drinking tea in all forms — hot and cold, in blended drinks and cocktails — giving the Tea Party an all new, and happily non-political, meaning.

Tablet tech proliferates: More independent and small-group operators will try point-of-sale-system software for iPads and other tablet computers as larger chains explore tablet use for line busting, training, inventory control, interactive wine lists, and wait-list management. Full-service establishments increasingly will use tablets for handheld POS terminals and on tabletops for self-order and pay, entertainment or surveys, among other functions.

Fine-tuned footprints: The movement to engage “green”-minded diners and reduce operating costs through the thoughtful use of renewable resources, recycled or salvaged building materials and energy- and water-efficient restaurant designs and equipment will accelerate.

Healthy M&A: Deal making will continue to be robust, as in 2012 when the industry saw about 10 major deals close and an additional six announced. Look for strong multiples for larger deals, like the 10x EBITDA Starbucks paid for Teavana or the 10.5x EBITDA Joh. A. Benckiser paid for Caribou Coffee. Private equity is still interested in restaurants, and “fresh powder” is still available.

The strong get stronger: Most securities analysts pick the strongest restaurant stocks to continue to gain momentum in 2013, including Starbucks, Bloomin’ Brands, Panera and Buffalo Wild Wings. Healthy operating margins, menu price elasticity and consumer appeal are driving these businesses and their stocks. Chipotle is set to surge in 2013 after a tough 2012, when its stock fell 15 percent through Dec. 27. The company posts some of the best numbers in the business and is a long-term bet by many on Wall Street.

Abroad-minded: U.S.-based restaurant concepts will increasingly look to expand their brands into emerging global markets. Looking beyond the Brazil-Russia-India-China BRIC nations, they will be eyeing the gorillas in the MIST: Mexico, Indonesia, South Korea and Turkey.

Smile and say cheese: Because it offers a simple, safe and easy-to-store way to gain that patina of “locavore,” more restaurant outlets — even chains — will rely on locally sourced cheeses and start offering cheese-board style selections.

Brewing up local offerings: More regions are gaining local craft breweries and distilleries, and restaurant operators will be tapping them to distinguish their profitable beverage offerings. In a September report, Technomic said craft beer grew 11.2 percent in volume to account for 5.5 percent of total U.S. beer volume. Consumers are showing increased interest in artisan and local products, the research firm noted. In addition, the number of craft brewers and microbreweries increased by nearly 200 facilities in the year prior to September.