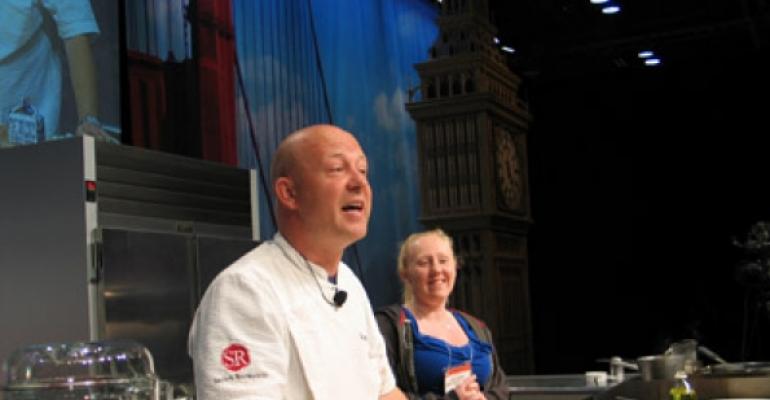 This is part of NRN’s special coverage of the 2012 NRA Show. The show is held in Chicago, May 5-8. Follow all coverage on NRN’s ‘At the Show' section, check out NRN blogs, Reporter's Notebook, and Tweet with us using #NRNatNRA.

“It was exciting two years ago,” he said. “Now it’s super boring. Who wants to have lunch next to a dumpster by a truck in a shady alley?”

So opined the chef of many strong opinions at the National Restaurant Association Restaurant, Hotel-Motel show in Chicago on Monday.

Richter, who is known for his restaurant L.A. Farm in Los Angeles as well as three delis across the U.S., was demonstrating a mashed potato and foie gras dish using a Vitamix blender at the show’s World Culinary Showcase.

The chef also has three restaurants in Finland, where he is from originally, and he is opening a steakhouse in Moscow.

Richter said the economy is looking up and sales at his U.S. restaurants are up 12 percent over last year.

The chef called up Tiffany Bock, a chef from the restaurant Brix in Omaha, Neb., to assist him during the demonstration. After the show, she mentioned that a co-worker had lost a case of beer by betting on him to win “Top Chef.”

Richter apologized for losing and handed Bock a $20 bill to pass on to the co-worker. “Tell him to buy a case on me,” he said.

Beyond food trucks, the chef shared his thoughts on a few other hot topics:

Molecular gastronomy: “It’s not my cup of tea,” he said. “Who wants to eat a 10-course menu only made out of plastic?”

Richter said he prefers a well-roasted chicken with “herbs up his butt” and a couple of roasted potatoes.

How to be a leader in the kitchen: “I have learned something: Without your staff, you can’t do it," he said. "A ‘yes’ and a ‘please’ and a ‘thank you’ costs you nothing. As soon as you start kicking people around, they shut down.”

Favorite food city: “New York,” he said. “It’s not L.A. I love L.A. but it’s not as foodie oriented as New York. You have a lot of actors working as waiters. You just don’t have the quality of staff.”

Fusion cuisine: “Why mix salmon with pineapple? There are enough weird fish in Hawaii you can add pineapple to.”