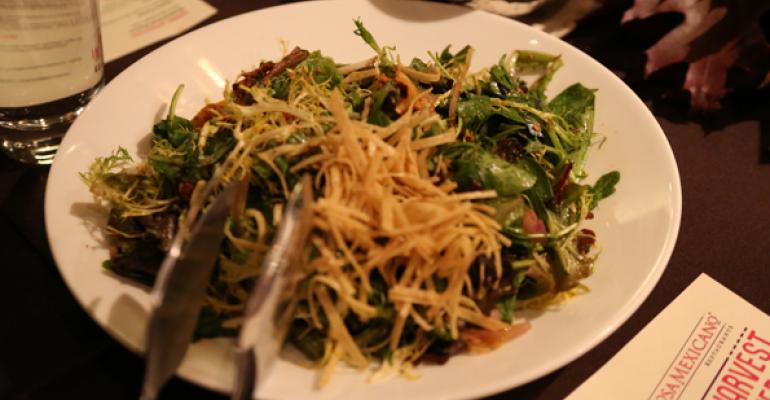 Rosa Mexicano, a 16-unit chain of upscale Mexican restaurants, has shifted its purchasing strategy to include more local, seasonal products, and it’s also regionalizing some of the menu items.

“Frankly, as the culinary scene has shifted a little bit, we’ve decided to shift with it,” chief executive Howard Greenstone said.

“Even though Mexican restaurants aren’t known for local, organic and sustainable products, we thought it was time to qualitatively shift, and our chefs have totally embraced it,” he said. “We’re starting to give them a little more freedom in terms of changing items in the menu, but we give them total freedom in buying local produce and some raw product.”

In the chain’s newest location, which opened in San Francisco at the end of October, executive chef David Suarez is using Washington state oysters in a ceviche special and locally foraged mushrooms in one of its tacos.

Each of the restaurants lists on its menus the local farms that supply it.

Greenstone said finding local sources is a challenging process for high-volume restaurants such as his, particularly when it comes to produce.

“It takes a lot of research to find producers that can handle the volume that we’ll sometimes throw at them,” he said, noting that farmers can be hesitant to commit their entire crop to one buyer.

That requires nimble purchasing and creative menu writing, he said. For example, the restaurants’ vegetable tacos don’t specify which vegetables are in them.

“There may be squash blossoms that are available in San Francisco, but not in Miami,” he said. “I couldn’t specify which vegetables are being used in which markets on a given day, because sometimes, frankly, the vendors don’t know,” he said, adding that he might change vendors for a particular vegetable every few weeks.

He said food costs have gone up by between 1 percentage point and 1.5 percentage points, but that his customers appreciate the move, which should contribute to better sales. “I’ll take top-line sales over cost any day of the week,” he said.

Rosa Mexicano has an average per-person check of $17 at lunch and $37 at dinner, according to a company spokeswoman.

Greenstone projects that it will take at least a year to “create the impression we’re looking for,” with regard to its local purchasing, although he said he already overheard a conversation about the San Francisco location. “She said, ‘Oh, I’ve heard about that place. They’re the ones using local product and sustainable ingredients,” he said.

Although most restaurants specializing in Mexican cuisine aren’t known for using local products, there are some notable exceptions, such as Joanne Weir’s recently opened Copita in Sausalito, Calif., across the Golden Gate Bridge from San Francisco, and burrito giant Chipotle Mexican Grill, which specializes in the Mission-style burritos that originated in San Francisco. Chipotle has a culinary philosophy of “food with integrity” and endeavors to by local products whenever it can — to the tune of more than $10 million last year, according to the company.