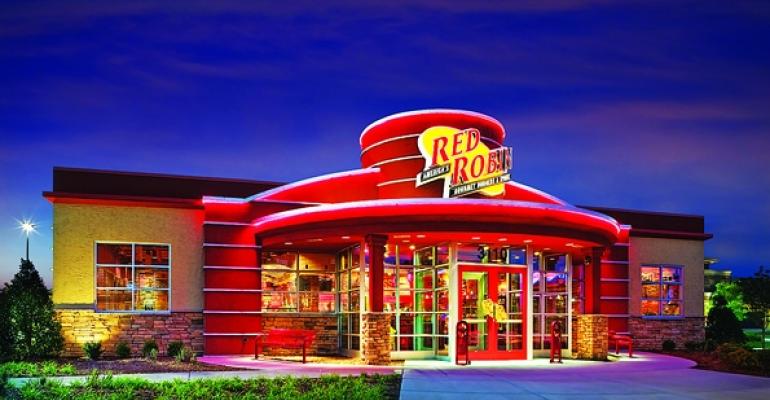 Red Robin Gourmet Burgers is testing a new line of premium burgers, including Kobe beef and possibly bison, that may debut in the second half of the year.

Carley said the chain is still studying what consumers want in a premium burger, as well as, “what guests are prepared to pay a premium for.”

The premium burger line follows the successful launch in 2012 of the value-positioned Tavern Double Burger for $6.99, which included the chain’s signature “bottomless” steak fries. The burger has add-on topping options for $1, and is designed to compete directly with fast-casual better burger chains that Carley said have “reset the bar” in the industry.

In a report Friday, Wall Street analyst Christopher O’Cull of KeyBanc Capital Markets Inc. said he expects Red Robin’s new premium burgers to be priced around $13.99 or $14.99, which would “complete the barbell pricing strategy.”

The exploration of premium burgers is part of several menu launches planned over the next two years. Carley compared the lineup to “being at O’Hare airport at 5 p.m. on a Friday. Our jets are lined up. We just have to pace and sequence them.”

The chain is also exploring new appetizers and desserts, and is continuing to work on building its bar program.

In addition, Red Robin is testing various remodel packages in 21 restaurants around Denver, a new spiral-spine menu, and plating burgers on red plates rather than in baskets to enhance the perception of value, Carley said. With the tests of the new design, Carley said the chain is going for a cleaner look that is “simplified, clarified and amplified.”

Seating presents a challenge for Red Robin as it tries to build its bar business while retaining families. Carley said the new design creates places within the restaurant where different age groups and configurations will feel comfortable. “So a group of guys won’t find themselves seated next to a family with small children,” he said.

Red Robin also plans to continue to grow its fast-casual Burger Works concept. The company has opened five locations of the roughly 2,200-square-foot concept and another five are planned for 2013.

The company is continuing to evaluate the smaller concept’s viability in different types of real estate, but Carley said it will likely open the brand up to urban and nontraditional settings where the larger, full-service suburban footprint couldn’t go before. “We will go slow until we get it absolutely correct,” he said.

Red Robin also selected Vitro as its national creative agency of record this week, the company said. Vitro has offices in San Diego and New York.