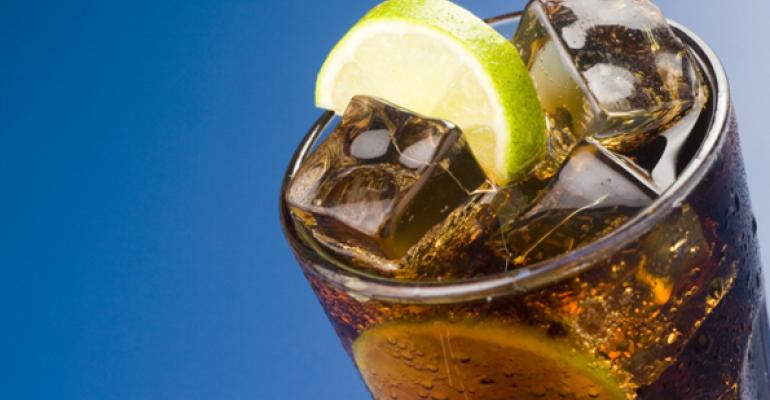 Association officials and restaurant operators expressed their frustration Thursday with the New York City Board of Health’s passage of a ban on the service of large sodas and sugary drinks.

The initiative, which was championed by Mayor Michael Bloomberg and designed to address the nation’s health and obesity problems, establishes a 16-ounce size limit on sodas or other sugary beverages served at restaurants, sports venues, movie theaters, street carts and delis.

Retail food and convenience stores — which come under the jurisdiction of the state of New York — are not regulated under the city ban.

According to the city, sugary drinks are defined as beverages that are “sweetened with sugar or another caloric sweetener that contain more than 25 calories per 8 fluid ounces and contain less than 51 percent milk or milk substitute by volume as an ingredient. It does not apply to diet drinks, calorie-free drinks and alcoholic beverages.

The National Restaurant Association maintains its position that the ban “unfairly targets restaurants, and is a misguided tactic to impact the obesity problem.”

“There is no scientific support that this beverage ban’s size and caloric limit will impact obesity rates,” said Joy Dubost, director of nutrition and healthy living for the NRA. “It is also bewildering that the ban restricts restaurants from serving sweetened beverages in sizes larger than 16 ounces, but individuals can purchase any-sized beverage from a convenience or grocery store.

“This ban will punitively impact thousands of New York’s restaurant owners — the majority of which are small businesses.”

“This is an example of government overreach that unfairly targets restaurant franchises and is a misguided tactic to impact the obesity problem,” Thorman said. “Mayor Bloomberg didn’t consult with the franchise industry, the restaurant industry or the beverage industry, and now this ban will be costly to franchisees who are already struggling to stay in business in a challenging economic environment. “

The ban is expected to take effect in March 2013, and the city said earlier it will begin fining sellers by as much as $200 for violating the ban in mid-June.

Andrew Moesel, a spokesman for the New York State Restaurant Association, called the board’s passage of the ban “disappointing but unsurprising." He noted, "After more than 38,000 residents shared their input, both positive and negative, the proposal passed almost entirely unchanged.”

The board passed the proposal by a vote of eight to zero, with one abstention.

Since introducing the proposal last May, Bloomberg has been a staunch supporter of the initiative. “In New York City nearly 60 percent of adults and nearly 40 percent of children are overweight or obese, and there are real-world consequences,” he said earlier. “People’s lives will be shorter, their quality of life is going to be dramatically reduced, and obesity is going to start killing more people in this country than smoking.”

According to the Centers for Disease Control and Prevention, obesity rates have risen steadily in the past few decades. In its most recent 2010 figures, the agency reported that 35.7 percent of U.S. adults and 17 percent of U.S. children between the ages of 2 and 17 are obese.

Dr. Michael Jacobson, executive director of the Center for Science in the Public Interest in Washington, D.C., called the ban “an important innovative strategy for helping to promote health among New Yorkers. It’s unclear what the effect might be, but it’s an interesting experiment.”

Noting that some critics of the ban plan to challenge it in court, Jacobson added, “If the measure takes effect, I think it will embolden other cities and states to become more aggressive in promoting health through serving size and other measures.”

Henrietta Davis, the mayor of Cambridge, Mass., already said she is considering a similar ban.

Opponents of the measure, however, called the proposal “arbitrary” in its approach to limiting what people can and can’t eat. “I don’t really get it,” said Irwin Kruger, the operator of two Smashburger outlets on Long Island, N.Y., and the former franchisee of seven McDonald’s outlets in New York. “This [ban] puts restaurateurs [and other businesses] in a light that is unfair relative to the issues concerning health and nutrition. [A patron] in a theater won’t be able to buy a 16-ounce drink, but they can buy a dozen packs of M&Ms. [The city] is just picking on sugary drinks.”

Jamie Richardson, vice president of government and shareholder relations for White Castle, called the vote “troubling but not surprising. It was not a decision made by elected officials — [the city board of health is] all appointed. It doesn’t allow citizens in New York to have a voice. It just unilaterally tells people what they should have in terms of portion control.”

Richardson said White Castle, which operates 45 locations in New York City, hasn’t made a decision yet on how it will address the ban. "We will comply when we have to comply," he said. "We’ll try to look for our best options.”

“Soft drinks complement our menu,” he said. “How do you provide the same level of guest satisfaction? It’s antithetical to consumer choice.

“At the end of the day, we run on razor-thin margins,” Richardson continued. “In the best of times, this would be a bad idea. In tough times like this, it’s atrocious.”

Moesel said a number of “gray areas” in the ban have yet to be hammered out by the city, including how consumers will be able to add sugar and syrups in coffee shops.

In the meantime, opponents say they will continue to fight the ban. Matthew Haller, vice president of public affairs for the International Franchise Association, said the IFA will continue its work to overturn the ban. "This just flat-out wrong and represents an overreach on the part of the mayor and the board of health,” he said.