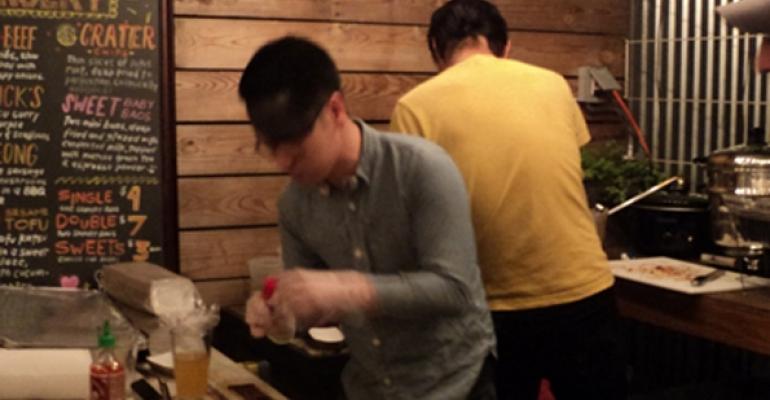 With funding for new businesses sometimes hard to come by, experienced restaurateurs across the country are developing alternative strategies to launch new concepts.

For well-established restaurateurs like Phil Romano, creator of Fuddruckers, Romano’s Macaroni Grill and other concepts, that has meant investing in a 15-acre restaurant incubator in Dallas. But more modest approaches are working as well, such as the fostering of cooks with good ideas at a Brooklyn, N.Y., hangout called Trophy Bar.

Located at the southern end of Williamsburg, Trophy Bar serves its own food most of the time, including popular hamburgers throughout the week and Mexican offerings celebrated during weekly Taco Tuesdays. But just as it hosts guest DJs, it also hosts guest cooks who set up shop in the restaurant’s backyard. Some of them have gone on to launch culinary careers of their own.

For instance, Steve Porto, founder and owner of AsiaDog, now has a brick-and-mortar restaurant in Manhattan and participates in many food-related street fairs and events in Brooklyn. “I’m good friends with the owners of Trophy Bar, and when they first opened up they asked me if I wanted to bartend part time,” he said.

Soon he was doing backyard barbecues there, and they grew popular enough that he started doing them every Tuesday during the summer of 2009. That led to other pop-up gigs, and finally, a freestanding restaurant.

Now Porto returns to Trophy Bar once a year on AsiaDog’s anniversary, but he has a full docket the rest of the time.

“We like to give them a venue to kind of try out — give them a launching pad,” Joyce said, adding that she closes Trophy Bar’s regular kitchen when pop-ups are cooking.

Pop-up operators need to get food vendor certification from the New York City health department, she said, adding that they keep the profits from everything they sell.

A current regular pop-up at Trophy Bar is Baoery, which prepares stuffed steamed buns for $4 each or two for $7 one Thursday night per month. “They e-mailed me,” Joyce said. “I looked at the logo and the startup page and had them bring me samples, and they were really good,” she said. “And we were like, ‘O.K., let’s set up an event.’”

“Luckily we already had menus together and ideas of what we wanted to do, and we did it within a week’s time,” said Dickson Wong, a freelance editor who started Baoery — a word play combining a downtown Manhattan street and steamed Chinese buns — with three friends. “We’d always been talking about maybe starting a catering business, or something with food, and we thought baos were kind of perfect, with our Asian heritage,” he said.

Although Wong and his partners — Adrienne Primicias, Grace Danico and Phong Bui — started Baoery at the beginning of the summer, they’ve already landed a couple of catering gigs and are firming up plans for expansion, Wong said.