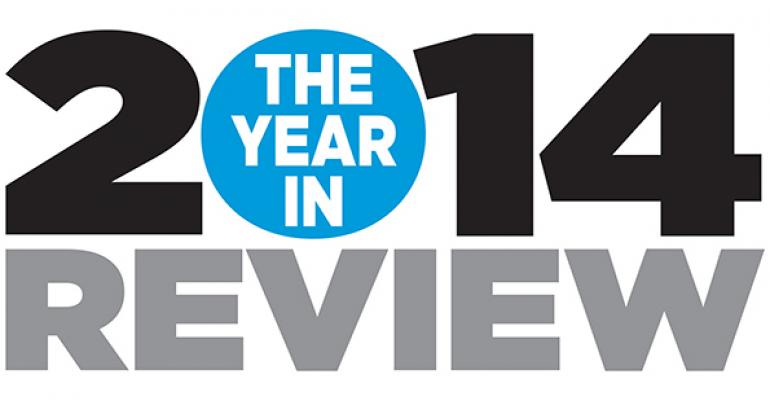 Each week, NRN editor-in-chief Sarah Lockyer gives you her take on the top restaurant industry news. Here, she looks at the most-read stories from the entire year. Get more highlights from 2014 &gt;&gt;

Tacos, top 10s and Top 100. The NRN audience spent 2014 clicking through stories related to new taco concepts, top 10 executives and the NRN Top 100, the definitive ranking and analysis of the restaurant industry’s largest players. Our top 10 stories of 2014 are as diverse as the industry we cover — some stories cover innovation; others major mergers or acquisitions; and still others tackle top food and beverage trends.

We ranked these stories based on number of visits, not page views, which can be skewed by slide shows and special packages. We wanted to be sure you saw a good mix of the year’s top news in the restaurant industry, rather than a list of our top photo galleries.

In 2014, Taco Bell continued riding high in its post-Doritos Locos glow, debuting mobile ordering nationwide and opening a fast-casual test concept, U.S. Taco Co. With incoming Yum! Brands Inc. CEO Greg Creed at the helm of Taco Bell through 2014, it isn’t a surprise that each move he made was watched eagerly. Creed continues to inspire a new generation of restaurant leaders and pioneers with innovative approaches to menu and marketing that he’s looking to translate to other Yum brands KFC and Pizza Hut in 2015 and beyond.

Our most popular story of the year takes a look at ten executives we were watching as the year was just beginning. Always an audience favorite, this year’s picks included Clarence Otis — and man were we right. Helming Darden Restaurants Inc. this year was not easy. As we said in January, Darden is at a crossroad. Well, the path became very clear when Otis resigned in July and the company’s board of directors was ousted in October. Now the one to watch is Darden board member and CEO of the activist investor pushing for all this change, Jeffrey C. Smith.

Two NRN special reports — the Top 100 and the Power List — were also popular. With Top 100 rounding its 42nd year in 2015, you can bet we’ll be taking on that project for another round in 2015. The Power List? The ranking of the most powerful players in foodservice spurred so much commentary and interest, we’re doing it again in 2015. Take a spin through 2014, and stay tuned for the year ahead.

See the top 10 stories of the year

9. The Power List: Power plays of the Top 10 executives

4. A look at the biggest fast-casual pizza chains