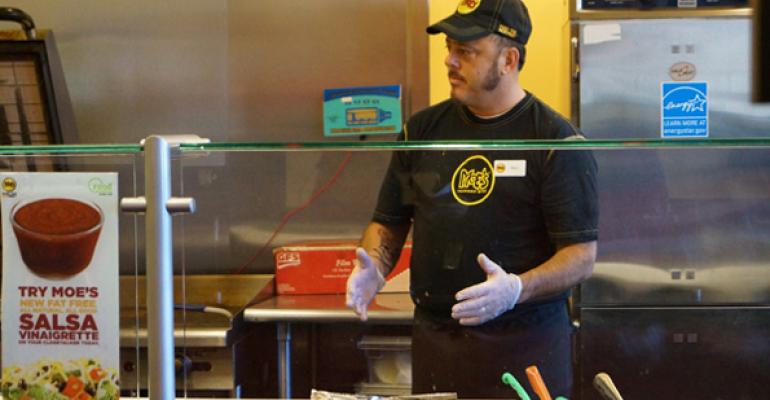 Moe’s Southwest Grill president Paul Damico said being on CBS’ "Undercover Boss" provided him with an invaluable experience to observe the company’s functions at the store level — and it gave Moe's a sales and traffic boost to boot.

"Undercover Boss" is an hour-long show on CBS during which a top-level executive disguises himself and works at the company's restaurants with the intention of learning more about its operations and its workers. Moe’s was featured on the episode that aired Jan. 18.

“I’m going undercover because Moe’s is growing extremely fast,” Damico said during the show. “I want to make sure our franchisees are not falling short of the standards of our brand.”

For his disguise, Damico was given a head of hair and tattoos. The managers and workers he met with in Ft. Myers, Fla.; Charleston, S.C.; and Nashville, Tenn., were led to believe Damico, or “Mark Richards,” was competing for the opportunity to own his own business.

After Moe’s Southwest Grill was featured on "Undercover Boss," the company saw increases in sales, foot traffic and average check, according to Damico.

10.4 million people tuned in to watch the show, the best performance of Undercover Boss since March 2012, he noted. “We had unbelievable reach,” Damico said.

On Jan. 19, the company received 170 leads from people wanting to buy franchises.

Social media metrics were also high, with 5,000 people “talking” about Moe’s on Facebook. And the Moe’s website saw its traffic increase from about 12,000 hits per day to 78,000 hits on the day the Undercover Boss aired. The day after the show aired the website had 45,000 hits, Damico said.

And the company is growing quickly. A new Moe’s opens every five days, he said, adding to the company’s nearly 500 locations.

Previously, the brand had focused on more local advertising, but now it's planning to take its message to the national stage, Damico noted. “We’re going to be on national television in March with our new commercials,” he said. “That’s the first time the brand is going to be [advertising] on national TV.”