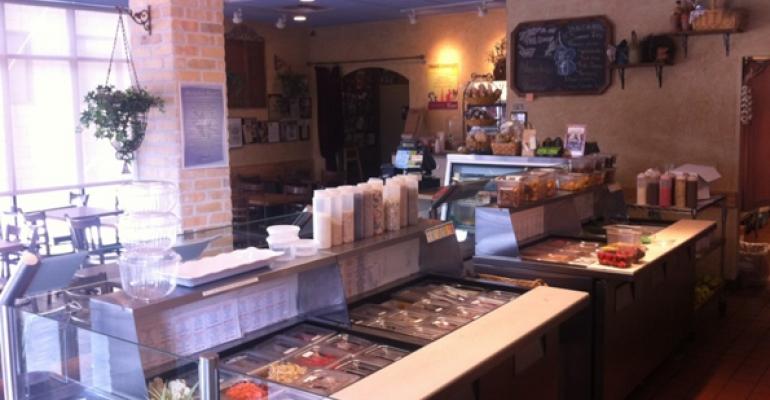 The Miami-based salad concept hopes to grow in the U.S. and South America.

Giardino Gourmet Salads was founded in 2004 by Ody and Kenny Lugo, a former teacher and former firefighter, respectively. It has since become a mainstay of the South Florida restaurant scene.

The Miami-based chain offers salads, soups and wraps in its restaurants and via catering, a mix the company hopes will help it expand throughout the U.S. in the coming years.

Julio Ramirez, who worked for Burger King for more than 26 years, is a part owner and board member at Giardino. As a former executive vice president of global operations at Burger King, he has experience in growing a business both within the U.S. and internationally.

With one company-owned and seven licensed locations, Giardino plans to use franchising as its core growth method going forward, Ramirez said.

“I think you’ll see us grow,” he said. “There’s no reason why we couldn’t eventually be in Brazil and Argentina and places that are a little further away as well.”

Giardino is currently aggressively pursuing franchisees, according to Ramirez. “We want to make sure the basics are right before we go nuts trying to bring people,” he said.

Ramirez spoke with Nation’s Restaurant News about the fast-casual brand and plans to expand it in 2013 and beyond.

What are some of Giardino’s competitive differentiators?

We have tremendous customization. Obviously, we give customers the opportunity to make their own salads. We also have different types of croutons that are made every day. We have 11 different crouton varieties. They really complement the proprietary salads we have. Our emphasis is really on great tasting salads. If someone wants to eat healthy in our restaurants, they certainly can, too.

Another differentiator is our service. Instead of your salad or meal getting prepared along the typical assembly line, our “gardeners” create your meal from start to finish and are trained to understand the ingredients and how to use them in alternative and complementary ways.

Growing on both fronts

How does Giardino plan to expand in the coming years? What are some target markets?

We anticipate that we will aggressively expand in the southeastern region of the U.S. in the next five years, specifically Atlanta; Charlotte, N.C.; New Orleans and other key cities. Longer term, we want to continue expanding to other regions of the U.S. Leveraging the fact that our home base, Miami, is the gateway of the Americas, we will be targeting international franchise groups to develop in the Caribbean, Mexico, and Central and South America.

We like the hospitality approach that we take to the business. Our focus is to get the basics right. I’d be very proud to double the business in the next 18 months and then things will really start to pick up speed.

Will you expand in the U.S. before branching into South America?

The reality is that I think we can do both at the same time. I think we should open other parts of the U.S. From Miami, you can be to lots of Latin American countries within two hours, and there’s local produce in all those countries.

What are some of the challenges your brand faces in 2013?

Our challenge is just to aggressively grow. There’s nothing in front of me that is daunting. It’s prime time for us to start advertising and start franchising the brand. I think there’s nothing else like this in Florida, and Florida is a big state. I know there is competition in other cities, but you don’t get the same experience. I don’t think other places have the variety of dressings or the experience that we provide customers.