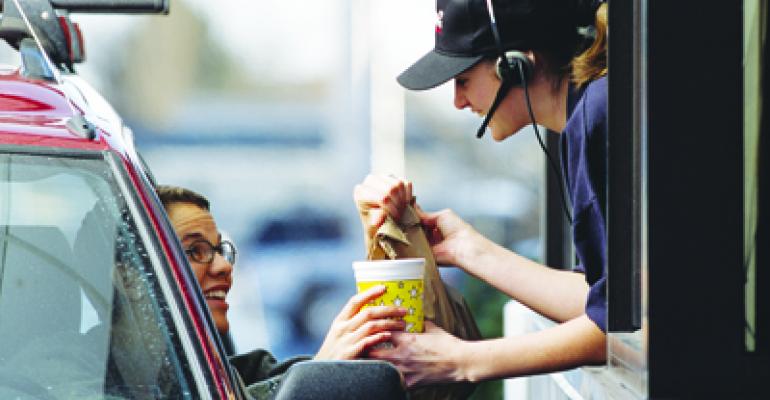 Consumers trading down from fine dining to quick service

Casual-dining chains may be missing an opportunity to capture patrons of fine-dining restaurants who are looking to cut back on spending, according to new consumer research by consulting firm Consumer Edge Insight.

For the first in a series of quarterly Restaurant DemandTracker surveys, Stamford, Conn.-based Consumer Edge Insight in July asked about 3,100 consumers across the country who visit restaurants at least once per month about what makes them choose one restaurant above another, focusing on about roughly 45 national family- and casual-dining brands and seven fine-dining chains.

Not surprisingly, consumers overall said they were cutting back on dining out and spending less in restaurants.

About half of those surveyed said they had less money to spend, but how they deal with the situation varies. About 60 percent of participants said they have traded down to less expensive dining options, while another 55 percent said they order less expensive items on restaurant menus and 51 percent take advantage of dining discounts or promotions.

However, the survey found that consumers that trade down from fine dining tend to skip the mid-price tier in the casual-dining segment. Among respondents who have been eating at quick-service restaurants more often in the past year, for example, 26 percent said they are eating at fine-dining restaurants less often; 23 percent eat less often at casual-dining concepts; and 15 percent are cutting back on fast-casual dining, the survey found.

David Decker, president of Consumer Edge Insight, said many consumers were trading down from fine dining for economic reasons. But rather than taking the smaller step down to casual dining, “a lot were trading down to quick-service or pizza restaurants,” he said.

In fact, the survey found, casual-dining brands tended to pick up more incremental traffic from consumers trading up than from those trading down. Of those customers who said they have been eating out more often at casual-dining restaurants in the past year, 15 percent said they've been cutting back on quick-service visits; 15 percent are eating less often at pizza/takeout restaurants; and only 12 percent said they were eating out less often at fine-dining restaurants.

That trend could be explained two ways, said Decker. Some consumers may be suffering such financial pressure that they are compelled to trade all the way down the price spectrum, he said. But it could also mean that casual-dining chains aren’t doing enough to communicate that value message to those looking to trade down from higher-end concepts. Instead, many have been focusing their market share battle on lower-priced competitors.

“Casual-dining operators have to figure out how to establish their relevance for the fine-dining customer with a trade-down mindset,” said Decker. “If restaurants can figure out how to reach that customer — what price point or menu item it takes — there are a lot of those customers out there.”

The survey also asked consumers what drives their loyalty. Within the casual- and family-dining segments, offering a good value was the most-cited factor, mentioned by 57 percent of respondents. Convenience was also a key attribute, cited by 54 percent, as was good service, cited by 50 percent. Cleanliness was the fourth most commonly cited attribute driving loyalty, and having great-tasting food was only the tenth most important factor.

Decker said four casual/family-dining brands were indentified by consumers as having good value: Applebee’s, Chili’s, Denny’s and Waffle House — each brand rated highest by 43 percent of respondents. Applebee’s and Chili’s also were ranked highly for having convenient locations.

However, Decker said the results also suggest that consumers may be subconsciously settling for less-great-tasting food in favor of a lower price point and convenience instead of choosing casual/family-dining brands with a strong value proposition and a large geographic footprint.

Ruth’s Chris was also rated highly by 52 percent of respondents for having good service, and 56 percent of those surveyed also gave the chain a high rating for cleanliness.

In addition, Morton’s was cited by 48 percent of respondents for good service, and McCormick & Schmick’s was ranked highly for cleanliness by 55 percent of those responding.

Decker said the survey results indicated that fine-dining concepts must also look for ways to protect market share from the ongoing “trade-down state of mind” among consumers.

“Given the many headwinds, there’s very much a value mindset out there, and reducing spending on restaurants is a popular way to economize,” he said. “Fine-dining restaurants need to focus on their value proposition as well.”