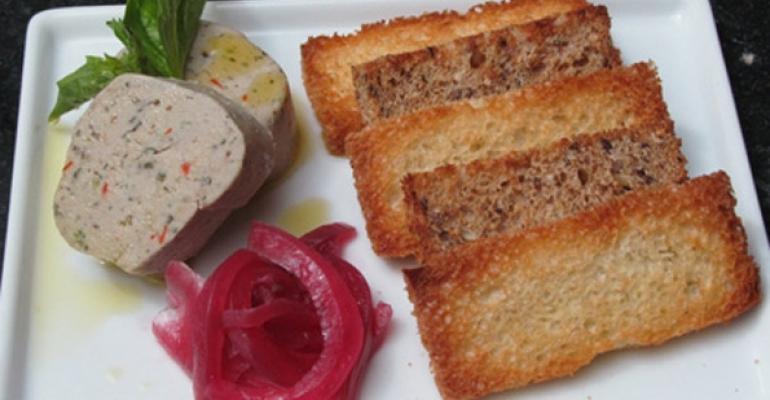 When it comes to charcuterie, meat typically comes to mind. But lately, another protein has been getting the royal preservation treatment: seafood. And while preserving fish is an ancient practice, more chefs are putting a new spin on old techniques, as well finding new ways to stretch an ingredient to its limits.

"Preserving fish in kitchens is nothing new. Chefs have been curing their own gravlax, for example, for decades and beyond,” said Rob Booz, network coordinator of Chefs Collaborative, a national chef network that promotes sustainable cuisine. “However, as more and more chefs look to use whole fish or to stretch the seasonality of ingredients or produce products in-house using artisanal methods, we are beginning to see a new era of seafood preservation."

At Hitchcock in Bainbridge Island, Washington, chef/owner Brendan McGill is continually exploring new ways to stretch the life of fresh ingredients from the sea through techniques such as curing and smoking. He has an entire section on his menu for seafood, and meat, charcuterie, all made in “the lab” next door at his Hitchcock Delicatessen and Charcuterie.

“It seems like preservation all around is becoming more popular. It’s a natural extension of using local foods,” said McGill. “You have to preserve it in order to make it last. And you get to do cool stuff to it to make it last.”

To increase the shelf-life of the 20 pounds of Pacific sardines he recently purchased, McGill saved half for grilling fresh and then made the other half into his version of boquerones, a traditional Spanish dish of salt-cured anchovies. And when he receives whole Pacific Albacore tuna, McGill makes fillets of the large fish, as well as Mojamma, a dry-cured tuna he describes as "fish prosciutto," which he slices thin and serves with salmon caviar.

Both sustainability and creativity inspire chef Carolyn Johnson to put seafood charcuterie on the menu at 80 Thoreau in Concord, Mass. For example, she uses entire lesser-eaten fish, such as bluefish, mackerel and swordfish, to make fish pates. Currently on the menu is a smoked bluefish pate that's served with pickled red onions, basil and toast, and seasoned with Hungarian wax chilis, lemon thyme and basil.

“It’s a way to use whole parts of the fish you wouldn’t [otherwise] serve,” said Johnson. “It’s a cost-effective method for us. It’s turning less exciting pieces [of fish] into a value-added product.”

But it’s not just chefs who like seafood charcuterie. “People’s palates are opening up,” said chef Charles Draghi of Erbaluce in Boston. “They are trying [seafood] charcuterie. There’s a lot more demand.”

Draghi serves preserved fish dishes, mostly appetizers, such as cured salmon with rosemary and orange; smoked and cured bluefish with a sauce of celery leaves, mustard, olive oil and lemon; and a terrine of diced fish with gelatin and peppercorns.

Last fall, chef Scott Anderson of Elements in Princeton, NJ, did big platters of smoked fish mousse with cured and smoked king salmon, salt cured hamachi, soy-cured sturgeon and scallop sausage terrine with condiments as an appetizer. “It was a hit, a total hit. We didn’t expect it,” said Anderson. “It eclipsed the meat charcuterie by far.”

Though that particular plate is no longer on the menu, Anderson says he’s definitely been doing more preserved seafood in the last few years. For example, he recently began making tuna chips — Big Eye tuna that has been marinated in soy, then hot-smoked and dried for 40 days and then thinly sliced — to add as an extra textural component to pasta and others dishes.

Though seafood charcuterie is not yet on enough menus to show up as full-fledged trend in the databases of market research firms such as Datassential MenuTrends, which tracks menu items at more than 7,000 chain and independent restaurants, many chefs are confident the practice will catch on.

“At one time when you saw pasta on a menu you accepted that it was store bought. Now in any decent town they sell pasta it’s safe to assume it’s house made,” said McGill. “I think charcuterie is going to do the same thing in different ways. I think you’ll see more of that 'in-house' this or that.”