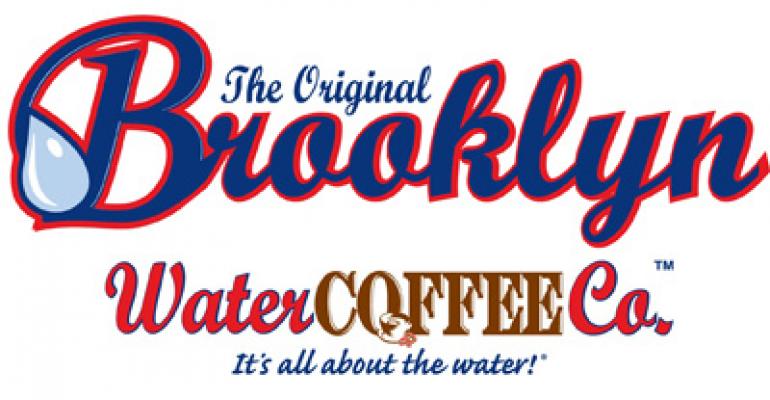 Concept uses the same “Brooklynized” water as the bagel chain

Brooklyn Water Enterprises Inc., the parent to the 10-unit Brooklyn Water Bagel Co., debuted Monday a coffee shop version of the concept that uses the same “Brooklynized” water as the bagel chain.

The 1,800-square-foot Brooklyn Water Coffee Co. opened next to the original 3,100-square-foot Water Bagel unit in Delray Beach, Fla., featuring on-premise roasting of coffee beans and its own branded lined of flavored dairy and soy creamers.

“Coffee was the natural brother or component of what we were doing,” said Steven M. Fassberg, founder and president of Boca Raton, Fla.-based Brooklyn Water Enterprises, which includes former CNN television host Larry King among its Bagel Co. franchisees. “No matter how good the beans are, coffee is 98 percent water,” Fassberg said, explaining how the coffee differs from national brands.

The company uses a 14-step proprietary water technology to create “Brooklynized” water in each of its restaurants, and now at the coffee company. It bottles and sells the water as well.

Fassberg said in an interview Monday after the Water Coffee opening that Brooklyn Water has an eye on franchising the coffee concept, but will work on evaluating it in the year ahead before making a firm decision.

Brooklyn Water Bagel, which opened its first unit in 2009, currently has nine units in Florida and one in Beverly Hills. An 11th unit will open next month in a Seminole-owned casino in Coconut Creek, Fla., Fassberg said.

Fassberg said the company has also signed a lease at PGA National Resort in Palm Beach Gardens, Fla., to open a previously announced brand extension called Brooklyn Water Pizza & Pasta Co. It will deliver pastas and pizzas with five- to seven-minute order times, with alternatives such as multigrain, whole-wheat and organic pastas at price points ranging from $5 to $7.

The Brooklynized water again plays a part in marketing. “Hydration of pasta is all about the water,” Fassberg said.

Among the 10 Water Bagel units, about 30 percent of sales are already in coffee and iced coffee sales, Fassberg said. “We believe coffee and bagels are married at the hip,” he said.

A regular coffee is $2.19, with other prices “about 10 percent to 20 percent less than national competitors,” Fassberg said.

The company roasts its own beans and delivers them to stores within three to five days to provide the best flavor and product quality.

“We basically consume everything within the first 14 to 21 days of roasting, when the beans have the most moisture,” he said.

The company takes all the leftover coffee from franchisee coffee production to make coffee ice cubes, Fassberg added. “It doesn’t dilute the iced drinks,” he said. “We also take what was waste and turn it into profit.”

The company has also created it own creamery line with “Brooklyn Coffee Creamery”-branded dairy and soy-based coffee condiments, with such flavors as Chambord, mint, hazelnut and vanilla. It also offers flavored whipped creams.

“People want the frills. We’re about creating differentiated options about what you put into your coffee,” Fassberg said.

King hosted the Monday opening of the Coffee Co. and autographed his own “Larry King Sunrise Coffee” brand.