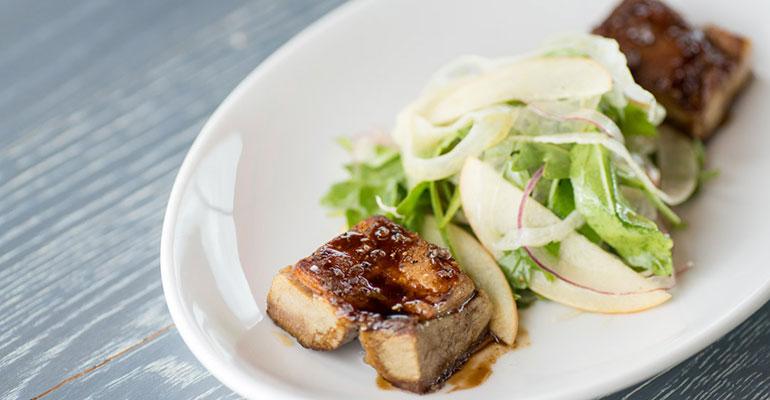 American consumers have long shown us that, no matter how much they’d like to eat more healthfully, they’re not going to sacrifice on taste. That means that even when their meal is a salad, they want it to taste great.

“You can’t just toss ingredients together and call it a day,” said Johan Svensson, executive chef at the BLT Market at The Ritz Carlton Residence Waikiki in Honolulu, Hawaii.

So he goes out of his way to source great ingredients, like the local Nalo Farm greens he uses in his Grilled Kauai Shrimp Salad, which apart from the local greens has shaved carrots, avocados, cherry tomatoes and some shaved radishes, lightly dressed in a truffle oil vinaigrette.

Using really fresh greens have their drawbacks, he adds.

“Sometimes people complain because they find a worm in it. Of course we do our best to clean it, but it’s real greens, and they have flavor,” he said.

Nick Erven takes a similar approach at Erven, a vegan restaurant with a grab-and-go salad section that opened in Santa Monica, Calif., about six months ago.

A case in point is his ceviche style hominy, for which large kernels of corn are marinated in lime juice, chile, cucumber and cilantro.

Erven’s sous chef, Aaron Polston, made the dish for staff meal one day, and it was such a hit that they put it on the menu.

Also popular is his broccoli chopped salad with pepperoncini, endive and black olive in a poppy seed dressing.

Lest you think salads have to be light, Datassential reports that the fastest growing protein on menus over the past four years is pork, up by 20.3 percent.

Pork and arugula go together in a salad at Bidwell in Washington, D.C.

Chef and owner John Mooney cures pork belly in sugar, spices and salt for a day, braises it for one and a half hours, cools it and then cuts it into thick slices. Then at service he crisps it on the griddle and plates it under a salad of baby arugula tossed with thinly shaved apples, fennel and sweet onions in a salad of olive oil, cider vinegar and a reduction of his braising liquid. He garnishes the dish with pork cracklings.

Mooney also has a Brussels sprouts salad for which he shaves the sprouts and mixes them with tangerine sections and dried cranberries. He adds some toasted pistachios for crunch and tosses it all in balsamic vinaigrette, and then garnishes it with popped sorghum.

“Popped sorghum is like baby popcorn,” said Mooney, who toasts the sorghum grains in a dry pan until they pop.

“Both salads sell very well. What inspired me to create them is because so many of my closest friends and customers are always looking for new salads. I’m also in pursuit of delicious flavors like never before,” he said.

Texture and deliciousness are also what Randy Lewis has in mind at Wildleaf, a new fast-casual salad restaurant he opened in Atlanta in January.

Lewis has a fine-dining background, and was once named one of the country’s ten “Best New Chefs,” by Food & Wine magazine.

Although Wildleaf is a create-your-own-salad concept, Lewis is making sure his guests have lots of flavor and texture choices.

“You need some kind of crunch in an item,” he said. So he’s offering croutons, corn nuts, toasted ramen, fried onions and other options.

“And also a nice array of fresh herbs,” he said, including basil, dill, parsley, oregano, mint and cilantro.

Lewis also is offering some of his own salad creations, such as the Catalan, which combines Tuscan kale with Medjool dates, Marcona almonds and Manchego cheese in a membrillo (quince paste) vinaigrette. His Mexicali salad is made of chopped Little Gem lettuce, avocado, radish, jicama, cilantro, corn nuts, tortilla strips and a cumin-lemon vinaigrette. High-quality protein is also a focus of Kerry Heffernan, chef of Grand Banks, a seasonal oyster bar on a fishing boat in New York City.

“We’re all sustainable, all the time,” said Heffernan, who’s planning a second boat, to be called Pilot, to launch in Brooklyn, N.Y., in the spring.

“Lot’s of salmon is being raised better,” he said and he plans to use that farm-raised salmon at Pilot. He said he’d sear it rare and serve it in a seasonally changing salad. In spring that will likely be fiddlehead ferns, pickled haricots verts and a ramp dressing.

That dressing is made by finely mincing the ramps heating vinegar to about 180 degrees Fahrenheit, pouring it over the ramps and refrigerating it for “days or weeks.” He uses the vinegar as a mignonette for oysters, but he takes the ramps themselves, purées them and emulsifies them with a neutral oil, like canola, for the vinaigrette.

Top-notch proteins and robust, slightly surprising flavors are also in a salad at Gan Shan Station in Asheville, N.C., where chef Patrick O’Cain cures American lamb belly overnight in salt and sugar and then braises it in chicken stock. When the bellies are tender, he chills them overnight in the braising liquid. Then he grills, them, slices them in one-inch to two-inch pieces and tosses them with sliced cucumbers, pickled peaches and Thai basil. He sprinkles them with Szechuan peppercorn and salt and drizzles them with chile oil.