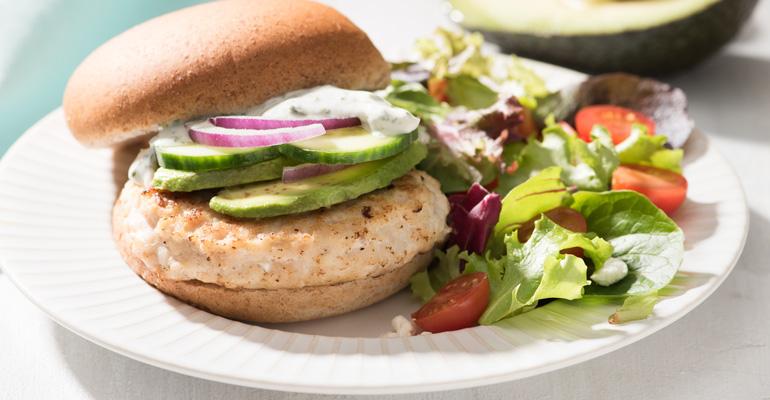 While hamburgers remain a top seller at restaurants across the country, chefs and operators are discovering that a growing number of nutrition-minded customers are seeking more healthful choices when it comes to their favorite all-American sandwich.

In Datassential's 2016 Keynote Report: The New Healthy, the Chicago-based research firm found burgers and sandwiches top the list of items consumers would like to see made available with more healthful choices. Forty-four percent of those individuals polled said they would like to see healthier burger options on menus.

Although beef easily dominates burger menus — hamburgers are available in more than half of all U.S. restaurants — other proteins and non-meat proteins continue to grow in popularity. According to Datassential, 17 percent of U.S. menus now feature turkey burgers. Meanwhile, lamb has risen 111 percent on menus over the past four years while bison is up 90 percent over the same period. Non-meat burgers such as portobello mushrooms, pulse proteins, black beans and quinoa also are gaining ground.

Blended burgers are popping up on menus as well. For example, Flip Burger Boutique menus the Earth + Turf burger, which features a blend of chopped beef and mushrooms topped with caramelized onions, Gruyère cheese, pickles and mushroom mayo. The Cheesecake Factory offers a Grilled Turkey Burger, which blends ground turkey and mushrooms, garlic and spices. It is served with grilled onions, lettuce and tomato. In addition, Sonic Drive-In recently announced the test of a blended burger called the Sonic Slinger. The burger contains 25 to 30 percent ground mushrooms.

Overall, many restaurants find that today's customers often are looking for lighter options when it comes to burgers. Build-your-own burger concept MOOYAH relies on its use of 100-percent Certified Angus Beef® to help differentiate itself from the burger pack, but also offers lower calorie turkey burgers and black bean veggie burgers for those customers opting for something a little more health-centric.

For those customers avoiding carbs, MOOYAH menus The Iceburger, which offers a choice of beef, turkey or black bean patties sandwiched between layers of iceberg lettuce and topped with avocado and other ingredients. As a part of its monthly “Taste to Try” promotion, MOOYAH showcased a similar item — The Lean Green, which featured a turkey patty served between layers of iceberg lettuce with Swiss cheese, avocado and barbecue sauce.

The key, Anderson-Liu says, is to offer the customer choice and a balance of “healthy and hearty.”

To help establish itself as a more healthful option in the crowded burger marketplace, fast-casual concept Elevation Burger specializes in serving 100-percent organic, grass-fed, free-range beef, which contains higher concentrations of various nutrients, less fat, and is pesticide-free and never treated with antibiotics. “It’s a vision for offering authentic and sustainable food that’s better for you and the environment,” says marketing manager Marc Mesmer.

While the 60-unit chain caters to consumers looking for an indulgent experience with selections like the Vertigo Burger — which allows customers to stack from three to 10 beef patties in one towering sandwich — it menus more healthful choices as well. “We sell a lot of our Paleo Burger — a beef patty, guacamole and bacon, wrapped in a lettuce wrap — and our 345 Burger, which is a 345-calorie burger that is made with a burger patty, wheat bun and tomatoes,” says Mesmer.

“There is definitely an increase in guests looking for healthier alternatives,” he says.

Von Hengst notes that healthful menu options contributed significantly to the chain's positive performance. “We've seen 90 consecutive months of increased sales, which wouldn't have happened if it weren't for our healthful selections,” he says.

Suppliers also are looking to accommodate the more healthful trend in the burger market. AdvancePierre® Foods, a purveyor of burger products to the foodservice industry, suggests several flavorful, better-for-you burgers that operators can add to their lineup. For instance, the company recommends its Smart Picks™ Cherry Salsa Cheeseburger recipe, which includes a flame broiled beef patty placed on a whole-grain bun and topped with a mixture of dried cherries and salsa and a slice of American cheese.

While restaurant patrons continue to seek out innovative and flavorful burger experiences, an increasing number are looking for more healthful choices as well. “Consumers are moving in a healthier direction,” observes MOOYAH’S Anderson-Liu. “They're looking for nutritional value.”