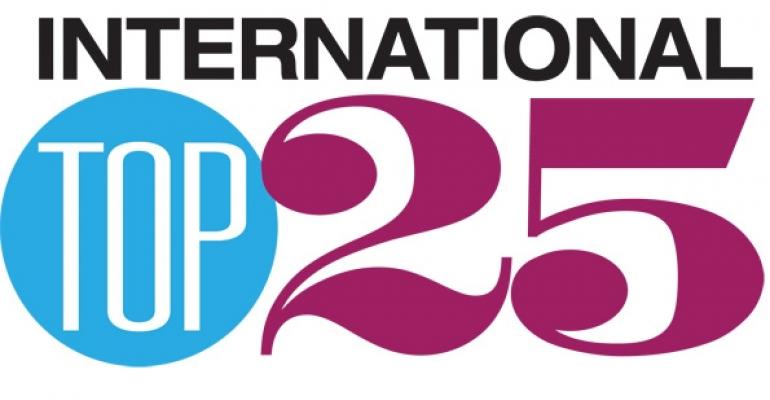 A look at the Top 25 international restaurant chains based outside the United States or Canada — ranked by worldwide systemwide sales by global research firm Euromonitor — showed aggregate sales growth for calendar 2012 of 6.5 percent to a total of $58 billion. That performance marked acceleration in growth from 2011, when the group expanded its aggregate top line by 5.5 percent.

In comparison, the Top 25 restaurant chains based in the U.S. or Canada, ranked by NRN on the same basis of worldwide systemwide sales, showed a collective growth rate of 5.3 percent in the latest full year, to $260.3 billion. That aggregate growth rate dipped, however, from a jump of 9 percent in the preceding year.

“The world economy has entered yet another transition. Advanced economies are gradually strengthening. At the same time, growth in emerging market economies has slowed,” Olivier Blanchard, International Monetary Fund economic counselor, wrote in a forward to the organization’s October 2013 “World Economic Outlook” report.

Indeed, the deceleration of international sales growth among U.S.- and Canada-based chains was tied to fluctuating exchange rates, or the impact on consumer spending from political or macroeconomic conditions in established markets like Europe or emerging markets like China and Russia.

As a complement to the regional data on overseas brands, NRN developed a look at the top five U.S.- and Canada-based chains and parent companies ranked by international systemwide sales, or sales from outside their home country. This separate look at data offsetting the research from Euromonitor shows the power of domestic restaurant brands as they charge overseas.

While the Top 25 U.S. and Canadian chains generated about 4.5 times the worldwide sales of the International Top 25 in the latest year, the international chains saw their collective share of the $318.3 billion aggregate sales pie reach 18.2 percent, compared with an 18.1-percent share a year earlier. Small steps, but steps nonetheless against the U.S.-based restaurant giants like Yum! Brands Inc. and McDonald’s Corp.

Kurt Schnaubelt, a director and member of the restaurant and foodservice practice at AlixPartners, a research and consultancy group, said U.S. chains that are succeeding overseas excel at market due diligence. Many often follow a Domino’s-like strategy of trying to be the first or second chain from their segment to enter the market. They also adhere to disciplined growth plans and take the time to find the best local partner or licensees, like Starbucks has done.

“Be true to your brand, but customize for the local market,” Schnaubelt said. “Taste and value are going to rule the day no matter where a restaurant company operates.”

The appeal of international markets is great to many U.S. foodservice firms. Some of the largest showcase growth, like Subway, which debuted last month its 3,000th Canadian location, among scores of international openings. But even the six-unit Katsuya by Starck sushi concept is working with developer SBE to soon enter the Kuwait market through a deal with Middle East franchised concept operator M.H. Alshaya Co. Going global is where growth lies.

Euromonitor’s Schaefer recently said macroeconomic developments can help build the attractiveness of some international markets for chains looking to expand beyond their home markets. For example, he noted that, during the past 10 years, a combination of government policies and investments have lifted tens of millions of consumers in Latin America from poverty to middle-class status. The potential for customers has made even secondary markets, including Columbia, Chile, Peru and, to a lesser extent, Mexico, rival the widely investigated Brazil.

“There’s a lot of demand for newer, more modern eating-out experiences,” Schaefer said. “The size of the opportunity is quite significant for a chain operator.”

The International Top 25 is a look at the 25 largest restaurant chains and parent companies with headquarters outside of the United States and Canada based on their worldwide foodservice sales. Sales figures were calculated by London-based Euromonitor International using the resources of its regional offices in Chicago; Singapore; Shanghai; Vilnius, Lithuania; Santiago, Chile; Dubai, United Arab Emirates; Cape Town, South Africa; Tokyo; Sydney; and Bangalore, India, and a network of over 800 analysts worldwide.

The International Top 25 companies selected by Euromonitor qualified on the basis of worldwide systemwide sales, or the receipts from company-operated and franchised or licensed restaurants for all of the proprietary concepts owned by the company in question. However, Euromonitor excludes from its company sales presentations the sales, if any, from concepts licensed or franchised from others. In some instances, as in the case of Autogrill SpA of Milan, this results in a smaller International Top 25 number than is publicly reported by that company.

The “25” in the International Top 25 refers both to the rosters of the largest international players and to the five leading chains and parent companies in five regions selected by the research house and Nation’s Restaurant News: Asia-Pacific, Eastern Europe, Latin America, Middle East-Africa and Western Europe. The non-U.S. and -Canadian chains and companies included in the regional reviews were selected based on their sales within those areas, which, in almost all cases, were also their home markets. Companies, excluding U.S. or Canadian groups, made the small roster on the basis of aggregate systemwide sales within a region from all of their proprietary concepts.

For its part in the research, NRN compiled a list of the top five retail foodservice chains — as opposed to contract operations and hotels — with headquarters in the United States or Canada based on reported or estimated international sales, or those generated by their systems outside of their home countries. For the purposes of International Top 25, NRN followed Euromonitor’s lead and reported for companies the systemwide international sales of all their proprietary brands. NRN also researched the Top 25 U.S.- and Canada-based companies and chains on the basis of worldwide systemwide sales so that it could provide some comparisons with the International Top 25 for key metrics.

Estimated Sales Per Unit is a proprietary NRN metric calculated using a formula that considers systemwide sales and change in year-end number of units and may not reflect chain- or company-reported average unit volumes or comparable sales per unit.

It should be noted that, while NRN sees the International Top 25 as a natural extension of its Top 200 series on domestic foodservice activity, the presentation of data for the International Top 25 differs greatly from that used for Top 100 and Second 100. Even apart from Euromonitor’s use of aggregate concept systemwide sales for companies — as opposed to Top 100’s and Second 100’s revenue from company restaurant sales, franchise fees and franchise sales royalties — the presentations for this report differ in other ways from NRN’s Top 100 and Second 100 practices.

Among the differences: Euromonitor presents all of its numbers based on calendar-year results, versus the actual fiscal years of the spotlighted chains or parents; includes in sales numbers the full amount paid by consumers to the chains, including value added taxes, where applicable; and converts all sales numbers in a multiyear series to U.S. dollars based on a fixed rate for the latest year in question, which, for this year’s International Top 25, means 2012. Sales and unit data generated by NRN are for actual fiscal years completed on or before June 30, 2013, as well as the prior two fiscal years, for the chains and companies shown.