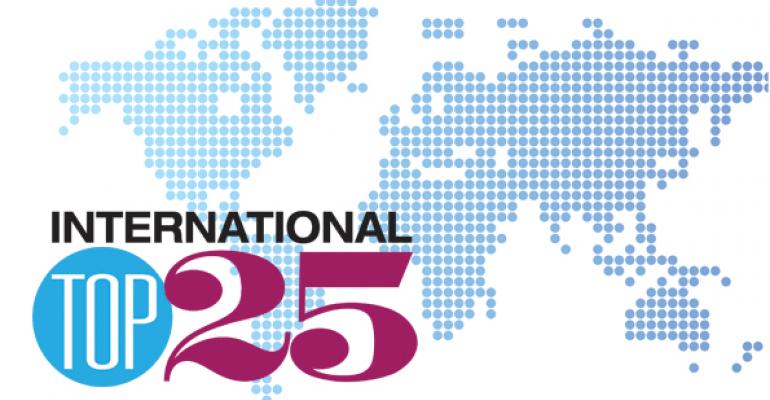 The International Top 25 companies bested their North American counterparts in terms of year-over-year percentage growth in aggregate worldwide systemwide sales in 2012. But that same group was outgunned by a 4-to-1 ratio in aggregate sales volume compared with the 25 top-ranked U.S.- and Canada-based companies, led by McDonald’s Corp.

As a group, the International Top 25 companies, with headquarters outside the U.S. or Canada, rang up 2012 calendar sales of $69.4 billion in constant, U.S. dollars, according to Euromonitor International. Those sales were up 6 percent from 2011, when sales were $65.5 billion — a 5.1-percent increase over 2010.

Research by Nation’s Restaurant News found that the 25 top U.S.-Canada companies had aggregate actual or estimated latest-year worldwide systemwide sales of $282.5 billion. Those sales, slowed by the sluggish global economy, weakened foreign currencies against the U.S. dollar and a poultry controversy in China, among other challenges, climbed 5.2 percent from the preceding year, compared to 9.6 percent in the prior 12 months. Bakery-cafe operator and franchisor Tim Hortons Inc., ranked No. 11 with latest-year estimated total system sales of $6.5 billion, was the only Canadian representative on the list.

McDonald’s, whose system fielded 34,480 restaurants worldwide at the end of fiscal 2012, generated $88.3 billion, or 31.3 percent of that latest-year U.S.-Canada group’s global sales. The Golden Arches’ sales were more than double those of its closest home-country rival, Yum! Brands Inc., with $43.1 billion in latest-year worldwide systemwide sales from its KFC, Pizza Hut and Taco Bell chains, among others.

The five C-Store operators in the International Top 25 — led by No. 1-ranked 7-Eleven parent Seven & i Holdings Co. Ltd. — continued to dominate the group in 2012, generating 45.8 percent of its total sales and about 61 percent of its year-over-year sales gain.