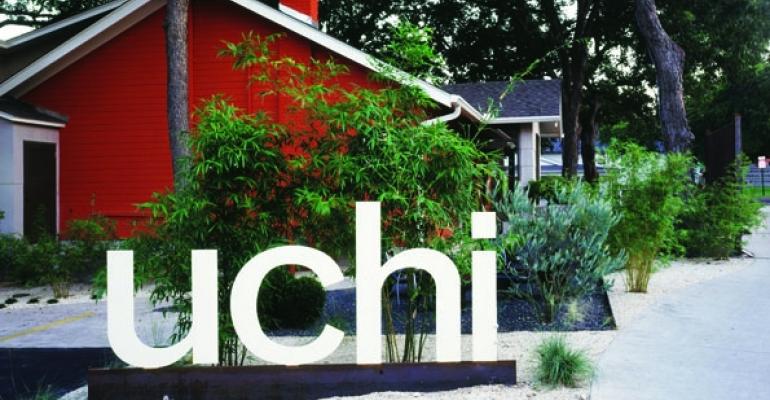 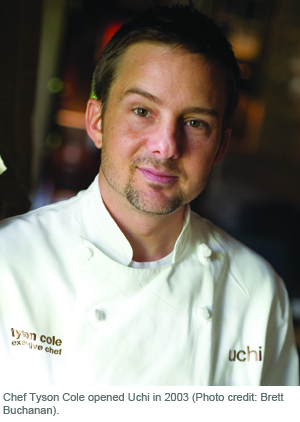 Like many Americans, Tyson Cole wasn’t in a rush to try the sushi at the Japanese restaurant where he was washing dishes to pay for college.

“I was like, no way. It’s raw fish. I tried all the other things first,” he said.

Slowly, though, he tried the seaweed, then the rice, and then raw fish inside a seaweed roll. Soon he was hooked, not only on the sushi, but on the family, the Japanese culture and the respect they had for their food.

He also changed his career plans, ditching painting and architecture.

“I realized I was born to cook,” Cole said.

And cook he can. Cole’s first restaurant, Uchi, which he opened in 2003, is credited with putting Austin, Texas, on the global culinary map. Reservations are hard to get at the downtown operation, which serves some 300 to 400 guests a night. The Japanese fusion restaurant was an instant hit. It’s nationally recognized for its original, flavorful and accessible cuisine, its beautiful presentation, and its delectable desserts.

“The dishes — from cold compositions to hot entrées to sashimi and rolls to desserts — emerge as intellectual mash-ups of flavors, textures, temperatures and taste-bud sensations,” Greg Morago recently wrote in the Houston Chronicle.

“I think Uchi and Uchiko [its sister restaurant] are the two best restaurants in the state,” said Patricia Sharpe, executive editor for Texas Monthly. She named Cole’s third restaurant, the Houston location of Uchi, the best new restaurant of 2011.

Before Uchi came along the customer base for Japanese restaurants in Austin consisted of the purists, who insisted on simple, pristine, nongimmicky sushi and sashimi, and kids who ate California and spider rolls and all sorts of Southwestern-influenced rolls, she said.

“Cole forged his own taste profiles that drew on Japanese principles and modern, youthful sensibilities,” she said. “He understood the two camps, and he fashioned something very sophisticated that appealed to both of them. In my mind he is the Nobu of Texas. And his restaurants here are more popular.”

Those lucky enough to grab a seat dine in a casual bungalow space dressed in a red floral wallpaper that — even though Cole hated at first and wanted to take down — customers love. The decor strikes “a strategic balance between high design and casualness” that looks amazing but not self-consciously done, said Sharpe, adding, “People feel like they’re in a cool place, but are not intimidated by it.”

Guests sit at communal tables and choose from a regularly changing menu of fresh fruits and vegetables, and fish flown in fresh each day from Tokyo’s Tsukiji Market. They then share dishes created by not one but two James Beard Foundation Award winners for Best Chef: Southwest — Cole in 2011 and Qui in 2012.

Mini masterpieces include the Shag Roll, a mix of salmon, avocado and sun-dried tomato that is rolled in a soy paper, tempura fried and served with squid-ink sumiso sauce; and Jar Jar Duck, a combination of smoked and confited crunchy duck cracklings, sweet kumquat confit and pickled endives served in a jar that, when opened, wafts rosemary smoke. 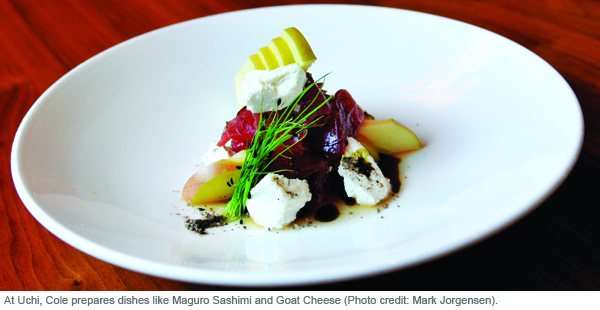 Much of Uchi’s success also stems from the creativity of Qui and Speer, who Cole hired for his pastry skills but who now directs food at all three restaurants, Cole said.

“What separates us is the way our food is created and presented,” Cole said. “Our servers are all trained in talking about the food, and everything we make is shared plates that are chopstick friendly.

“The more dishes I can create to get people to try, the more fun they are going to have as part of the dining experience,” he said. “We just try to create an amazing dining experience every day.”