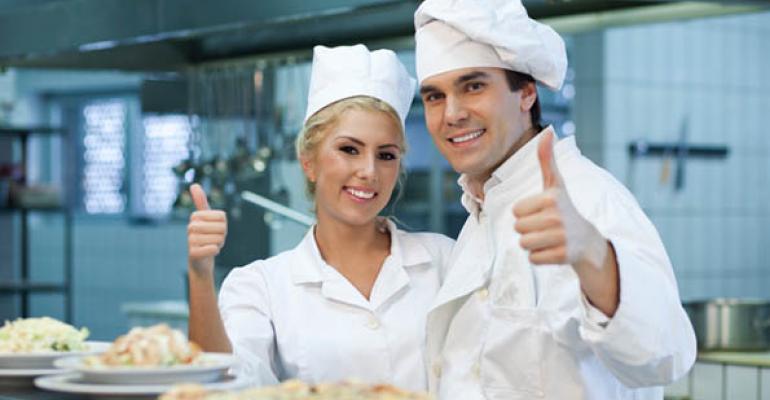 The People Report Workforce Index, which measures expected market pressures on restaurant employment, reached its highest level for the upcoming third quarter since it was established in 2006.

The third-quarter overall index rose to 77.8, from 69.0 in the second quarter. Vacancies at the management level and turnover rates both increased.

The Workforce Index is produced by Dallas-based People Report and is based on surveys of human resources departments and recruiters in the restaurant industry. The index has a baseline value of 50, with results over that level indicating increased pressures on five components: employment levels, recruiting difficulty, vacancies, employment expectations and turnover. Results are based on expectations for the quarter underway.

“We saw a lot of all-time highs across the index,” Harms said. “Seeing numbers in the upper 80s and 90s is very, very rare.”

“All the arrows point to an improving labor market, and that’s exactly what we’re seeing,” Harms said.

The foodservice industry added 79,900 jobs during second quarter, rising from 78,700 in first quarter. People Report noted that this restaurant growth was less than the 86,000 jobs the industry had averaged each quarter since the start of 2012.

According to the Workforce Index, 70 percent of restaurant companies added staff at the hourly level in the second quarter, an increase from 41 percent in first quarter, and only three percent reduced staff. At the management level, 53 percent added staff and 5 percent made reductions.

“There’s growing pressure, especially at the management level,” Harms said. “There is a growing demand and they have increasing options both inside and outside the industry.”

“We’ve seen increasing turnover rates in all industry segments at both the hourly and management levels,” Harms explained. “Turnover is a lagging indicator, so you can expect that to rise. Fast casual and quick service are at the tip of the spear, and they are already seeing increases in turnover that will probably trickle into casual and fine dining as well.”

Overall Workforce Index rankings by industry category for the third quarter rose in all four segments compared with the second quarter: