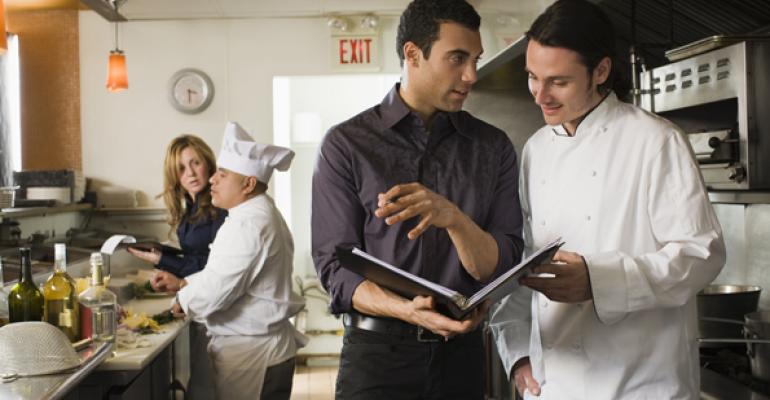 The People Report Workforce Index, which measures expected market pressures on restaurant employment, fell nearly six points in the first quarter, the biggest dip since the fourth quarter of 2011.

The quarterly index still indicated restaurant operators would continue to face recruitment and retention challenges, at least in the first three months of 2013.

The Workforce Index is produced by Dallas-based People Report and is based on surveys of restaurant human resources departments and recruiters. It measures from a baseline value of 50, with any results over that level indicating increased pressures on five components: employment levels, recruiting difficulty, vacancies, employment expectations and turnover. Results are based on expectations for the quarter underway.

The first-quarter overall Workforce Index stood at 61.1, down from 67 points in the fourth quarter of 2012. The index had nudged upward 2 points in the last quarter.

Michael Harms, executive director of operations at People Report/Black Box Intelligence, said that the latest index score "is still indicative of growth and increasing labor pressures in the industry, but it did show a downward trend.”

He also noted that the index reflected some uneasiness in the economy. “Obviously, the industry is sensitive to economic changes and we saw a little economic volatility at the end of the year,” he said. “Turnover started to tick up. GDP [gross domestic product] growth was flat to negative. This shows that some of the high expectations we saw going into the fourth quarter, based on the strong third quarter, didn’t quite live up to expectations.” 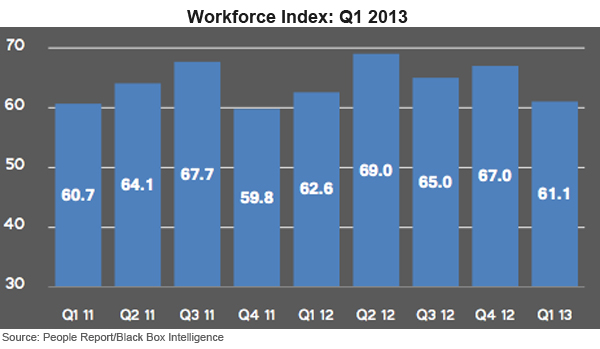 The overall index’s changes have been “slow and steady” for the past three years, Harms said. “We’re seeing modest increases in turnover over the last two years, modest job-growth gains, modest increases in recruiting difficulty and the number of vacancies,” he said. “So this really isn’t a spaceship or rocket, it’s just more of a slow increase.”

Turnover rates among restaurant operators in the survey have been on a plateau as well, Harms said. “Turnover is tightly related to unemployment,” he explained. “We’ve seen the unemployment rate drop from 10 percent to around 8 percent over the last couple of years. When we started to see that drop, that’s when we started to see turnover really increase. But that rate has been pretty stagnant.”

The U.S. employment rate increased a tenth of a percentage point in January, its first increase in a year, to 7.9 percent.

“We’re adding jobs slowly but surely,” Harms said. “Despite rising gas prices and despite the payroll-tax increase that everyone is facing, there is optimism out there that the industry is growing and there is going to be increased demand. People are looking for workers.”