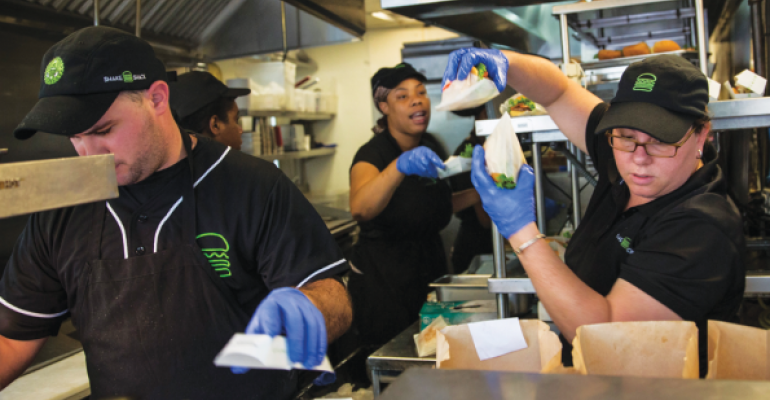 The restaurant industry employs a tremendous amount of people and sells food at costs low enough to entice consumers to eat out. Traditionally, this combination has meant that operators pay workers at rates not far above the minimum wage. But the combination has also translated into remarkably high turnover rates. Some quick-service concepts can consider themselves fortunate if turnover falls below 100 percent.

With looming minimum-wage increases and a shortage of the type of labor the industry has traditionally relied upon — namely, teenagers — a few companies have started bumping up pay.

The biggest, by far, was McDonald’s Corp., which last year vowed to pay workers at its company-owned locations $1 above the local area’s minimum wage. Executives in the months since have touted the effort and its ability to help the chain attract and keep stronger workers. Another was Shake Shack Inc., the New York-based better burger chain.

This year Shake Shack increased pay for workers at all of its 44 domestic company-owned units.

CEO Randy Garutti pointed out the reason for the decision in earnings calls with investors. 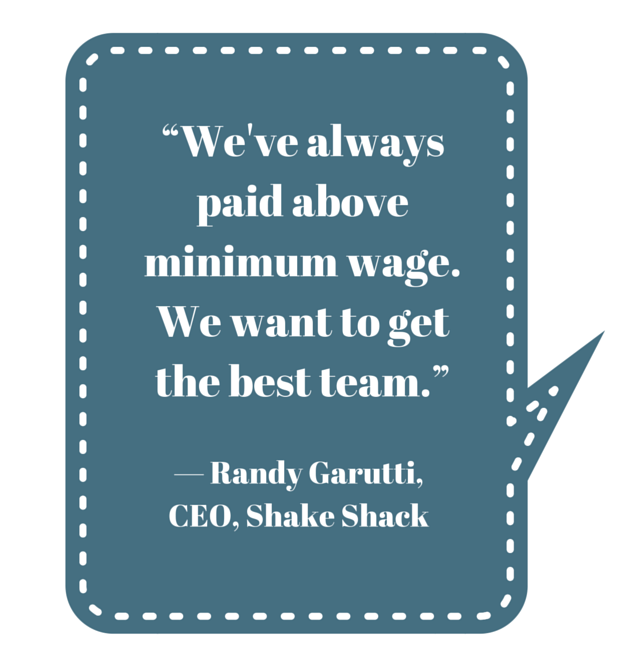 “We believe paying the team will drive more sales, help us attract and retain the best people, reduce turnover and provide opportunity to advance our leaders to even stronger places in their careers,” he said.

Proponents of higher wages in the industry say that greater salaries help reduce the costs associated with turnover while improving customer service and ensuring a more stable workforce.

After all, people work for money. While companies can take numerous steps to improve their workforce culture and offer better benefits, at the end of the day the best recruiting tool is in the pay stub.

Yet such wage increases are risky, especially for restaurant chains beholden to investors. Deliberately increasing labor costs in the short term hurts profitability. And it’s difficult to measure whether higher labor costs ultimately translate into sales improvements down the road.

Shake Shack is a fast-casual chain with high volumes. The segment’s chains tend to have lower labor costs: Fast-casual chains’ labor costs were about 27 percent of revenues last year, the lowest of any sector in the industry, according to the consulting firm BDO.

But the company has said repeatedly that it doesn’t expect the low labor line to last as it expands and its average unit volumes decline.

Nevertheless, executives are eager to set themselves apart from competitors in part by attracting a higher-end workforce. Given increasing minimum wages in many states, Shake Shack began raising its starting pay.

Last year, the burger chain increased its entry level pay in Washington, D.C., to $12 an hour.

“We’ve always paid above minimum wage,” Garutti said in November. “We want to get the best team. We want to have the best people, driving sales, and driving to our restaurant. So we’re going to pay the right wage in each market to do that.”

Such efforts do cost money. On its fourth-quarter earnings call in March, Shake Shack warned that its labor cost would rise by 1 to 1.5 percentage points this year after the company increased pay chainwide. Shake Shack’s stock fell by more than 3 percent the day after its quarterly earnings report.

Some observers say that chains can offset higher labor costs in part by reducing costs associated with turnover.

Because unemployment has fallen to 5 percent, turnover in the industry has been on the upswing.

“Walmart just changed its entire compensation package,” said Joni Thomas Doolin, CEO of TDn2K, owner of People Report. “Walmart didn’t do it out of the goodness of its heart. It had employee turnover rates above 50 percent. When your turnover is above 50 percent, the wheels are coming off.”

Many other retailers that compete for the same workforce as restaurants have also raised their compensation, which could increase turnover further.

Executives at Shake Shack say they have seen “early progress” on turnover. As to whether this is translating into higher sales, that remains to be seen.

Next: Make these tactics work for your business.

(Continued from page 1)
Increasing worker pay can have definite benefits for a restaurant. Be prepared for smaller margins in the short term, but here are some strategies to benefit from the higher pay and offset those wages down the line:

Make it known you pay more. There’s no point in raising wages if people don’t know about it. Use existing workers, job sites, job fairs and other strategies to market your higher pay.

Give them something to work for. Employees don’t just want higher pay now; they want the option of higher pay later. Provide ample opportunities for top workers to move up in the business. If they don’t, they’ll move on.

Have them share in the wealth. Are you such a good employer that all of your top positions are taken? Consider profit-sharing strategies or bonuses for top managers to share in the success of their restaurant.

Get efficient. Use labor scheduling software and other technology to make your business more efficient. And don’t be afraid to investigate customer-facing technology like counter kiosks or tabletop tablets that can improve the customer experience as well.