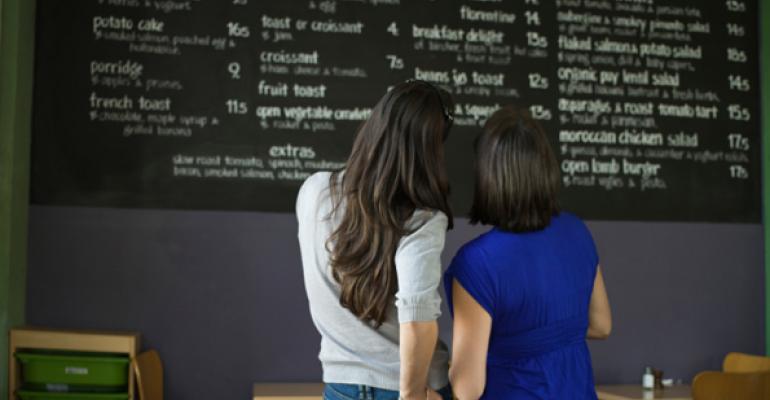 Opinion: Why menu labeling is good for business

Anita Jones-Mueller, M.P.H., is a contributor to NRN and president and founder of Healthy Dining and HealthyDiningFinder.com. This article does not necessarily reflect the opinions of the editors or management of Nation&rsquo;s Restaurant News.

I admit — I wasn’t a proponent of menu labeling at first.

About 15 years ago, an attorney working with the California Restaurant Association briefed me about the potential menu labeling legislation being discussed back then. I thought, “No way would that — could that — happen.” The attorney agreed.

Even though I have been a health nut for most of my life, fascinated with the power of food and its effects on optimal health and well-being, and even though I had a master’s degree in public health and nutrition, and even though I was working with a few hundred restaurants in Southern California, helping them offer accurate calorie and nutritional information for a selection of their menu items, and even though my company’s “Healthy Dining” books were flying off the shelves at local grocery and book stores, I still didn’t believe menu labeling would — or could — happen.

Because it takes a lot of work and a lot of time to analyze restaurant meals for calories, fat, sodium and other nutrients. I know firsthand because I was pounding the pavement back in the ’90s, asking restaurants to participate in the Healthy Dining Program, a nutrition marketing program we created for California-based restaurants. That meant I had to help them put together accurate recipes with precise measurements and brand names of their products so we could precisely calculate the nutrition information. Although the restaurants wanted to be featured in our books, they thought my need for accurate recipes was, well, quirky. I assured them that all they needed was accurate recipes and nutrition information for a few menu items — just four or five — and that would be enough to please diners who were watching their weight, cholesterol or sodium.

Sure enough, the restaurants found benefit from meeting the needs of the small but growing health-conscious market through increased loyalty, along with positive press, marketing and word-of-mouth. And just a few accurate recipes was all that was needed back then.

Then, in 2007, in collaboration with the National Restaurant Association and with funding through the National Institutes of Health (NIH), we launched the nationwide website HealthyDiningFinder.com, which has grown to feature 60,000 participating restaurant locations while reaching millions of nutrition-conscious Americans coast to coast. Since then, restaurants aren’t limiting their Healthy Dining choices to just four or five items. Most have at least 10, and some have many more than that.

That’s how I changed my mind about menu labeling. The landscape is shifting and restaurants are embracing the shift. Operators, chefs and marketing directors are asking how they can meet the Healthy Dining nutrition criteria for more of their menu items. They are asking for advice on how to reduce calories and sodium and how to offer healthier kids’ meals. Most recently, they are recognizing the importance of addressing allergens and additives.

Even without labeling rules, the restaurant industry is evolving to meet the needs of a more health-conscious public. In particular, the last two or three years have brought exciting advances, including a new level of culinary creativity being applied to the development of more healthful menu choices.

Consumers are changing, too. They are increasingly focusing on the quality and nutritional value of the calories they are consuming. They’ve come to understand the benefits of avoiding excess saturated fat, sodium and sugar. More people are interested in locally sourced, organic, GMO-free, vegan or vegetarian, and gluten-free meals.

Likewise, new technologies are accelerating the change in consumer attitudes. Wearables and mobile apps are enabling Americans to better track and understand their daily habits. Roughly 25 percent of smartphone owners and 22 percent of tablet owners use mobile devices to track their health, diet or exercise, or a combination of those. That’s a lot of people who are becoming intimately aware of their daily habits, including what they eat at home and in restaurants.

How is your restaurant handling the new menu labeling regulations? Join the conversation in the comments below.

Our culture is changing. A transformation in the way we eat is in full swing. Schools, worksites, grocers, the media and the government are all promoting healthier lifestyles and healthier eating. The movement is carrying over into our medical system, as surgery and reactive drugs are increasingly being replaced by a proactive stance of healthy eating and exercise as both prevention and cure.

More and more, Americans are valuing food as the fuel for being at our best. Parents are valuing food for its role in raising healthy kids. Worksites are prioritizing wellness to help their employees stay healthy and increase productivity. Restaurant chefs and culinary departments will play an important role as they help shape the future with their healthy creativity and artistry.

Our healthier culture is already here and impacting the industry. Veggie Grill, Lyfe Kitchen and Sweetgreen are flourishing. Kale, quinoa and beets are becoming staples on restaurant menus. McDonald’s may soon become the world’s largest supplier of Cuties clementines.

There is no better time for restaurants to embrace menu labeling and this movement’s potential as a positive for guests and profits. I firmly believe that restaurants that view menu labeling not as dreaded rules or government overreach, but instead as a formula for helping Americans be their best, are the ones that will succeed and prosper.