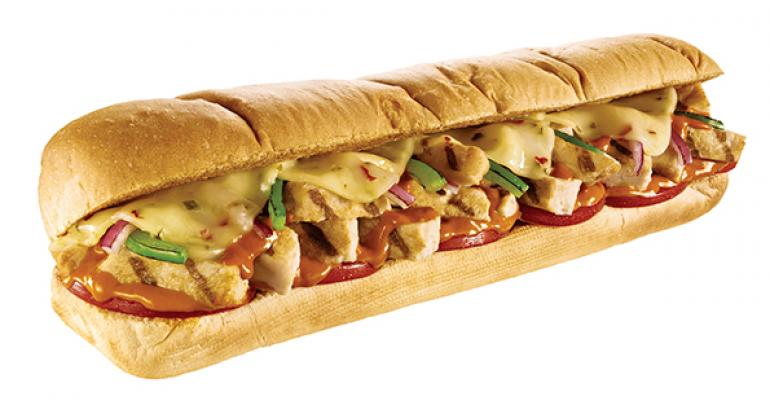 Subway plans to switch to chicken raised without human antibiotics by next year, company officials said this week.

The sandwich chain is also working to find antibiotic-free options for all the meats on its menu, although it couldn’t say when that might happen, given the 44,000-unit chain’s size and the limited supply.

The move comes as Subway, which celebrated its 50th anniversary on Friday, grapples with ongoing fallout related to charges against longtime spokesman Jared Fogle that include child pornography and traveling to have sex with minors. Subway has cut all ties with Fogle.

The Natural Resources Defense Council, or NRDC, used Subway’s anniversary to increase pressure on the sandwich chain, pushing for officials to publicly commit to phasing out meat raised with antibiotics.

Using a billboard in Subway’s hometown of Milford, Conn., as well as petitions and a social media push, the NRDC called on Subway to implement a three-step plan for antibiotic stewardship, including a timeline for action, an immediate move away from chicken raised with human antibiotics, and adopting a third-party audit system to benchmark results in meeting those goals.

Other large restaurant chains, including McDonald’s, Chick-fil-A, Chipotle Mexican Grill and Panera Bread, have announced initiatives to eliminate suppliers that routinely use antibiotics to produce meat.

“Subway has been conspicuously silent on its antibiotic policies at a time when a flood of other industry leaders are stepping up to address the health threat of antibiotic abuse in meat production,” said Lena Brook, NRDC food policy advocate. “If Subway wants to be seen as serving a healthier alternative to fast food, it should assure its customers that it’s serving meat from farms where antibiotics are not overused.”

Research has indicated that the use of human antibiotics to treat animals raised for food has contributed to the rise of “superbug” bacteria that have become resistant to antibiotics.

The NRDC contends that many large industrial farms commonly use antibiotics to help animals grow faster and to allow them to survive in overcrowded and sometimes unsanitary conditions.

More than 60 environmental organizations — including the U.S. Public Interest Research Group, the Consumers Union, the Center for Food Safety and Friends of the Earth —  have joined in the campaign targeting Subway, and sent a letter to company officials in June calling for action.

In a statement, Subway officials said they share concerns about the overuse of antibiotics in livestock production.

“We have been working toward the elimination of antibiotics, as are many other companies, which makes securing supply challenging for a chain our size,” Subway said through a spokeswoman. “We are working with our suppliers to find a cost-effective, quality solution for our franchisees and customers.”

The goal is to eliminate the use of antibiotics in products across the menu, Subway said, but “we cannot provide a date when all the work will get done as the demand is somewhat higher than supply right now. However, we are targeting to transition to chicken raised without antibiotics important to human medicine in 2016.”

Brook said Subway’s response was “heartening,” but that the NRDC’s campaign would continue.

“We’re hoping to see a more concrete commitment,” she said. “We’d love to see Subway become a leader on this issue, rather than a laggard. We’re here to help them figure out the details about what it takes to be strong antibiotic stewards.”

Food activist and blogger Vani Hari, known as the “Food Babe,” launched a campaign last year against Subway petitioning for the chain to remove azodicarbonamide — a chemical also used to make yoga mats and other materials — from Subway’s bread. The chain has since removed the chemical.

This article has been revised to reflect the following update:

Update: Aug. 28, 2015 This story has been updated to include the environmental organizations involved in the campaign targeting subway.