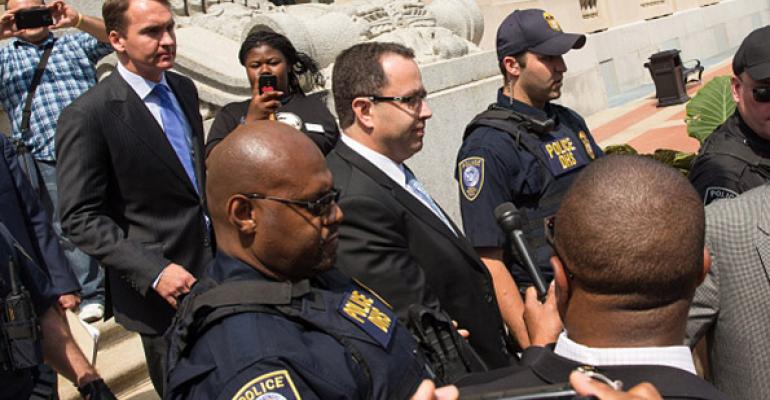 <p>Jared Fogle walks out of the courthouse in Indianapolis.</p>
Marketing

Jared Fogle has agreed to plead guilty to a pair of charges related to child pornography and having sex with minors, federal prosecutors said Wednesday, bringing a shocking end to his more than decade-long run as pitchman for one of the largest restaurant chains on the planet.

Fogle, whose 245-pound weight loss brought him to fame and earned him celebrity status as a spokesman for Subway, has agreed to a deal in which he will plead guilty to one count of child pornography and one count of traveling to engage in sexual contact with minors.

Under the deal, prosecutors agreed to argue for no more than a 151-month sentence, or about 12-plus years, and federal guidelines require he go to prison for a minimum of five years.

Fogle has also agreed to pay $1.4 million in restitution to 14 victims of alleged child pornography and child prostitution.

“Jared Fogle has been charged and has admitted to participating in a five-year scheme to exploit children,” Josh Minkler, U.S. Attorney for the Southern District of Indiana, said at a press conference in Indianapolis. “Let’s call this what this is: This is about using wealth and status and secrecy to illegally exploit children.”

The charges stem from an April arrest of Russell Taylor, described as a longtime friend of Fogle’s and the former executive director of the Jared Foundation. He has been charged with child pornography charges.

In court documents, prosecutors allege that Taylor filmed a dozen underage girls, without their knowledge, using cameras hidden in places like clock radios throughout his home, starting with a 14-year-old girl in 2011.

According to the charge, Taylor allegedly filmed 11 more children and would share images and videos with Fogle.

Prosecutors also say that Taylor gave Fogle commercial child pornography made outside the U.S. and involving children as young as 6.

In addition to the child pornography charges, federal prosecutors also say that Fogle traveled to New York City to have sex with minor prostitutes. Those charges date back to 2010.

According to the plea deal, Fogle has agreed to pay $100,000 in restitution to each of the 14 victims.

Fogle has also agreed to have treatment for sexual disorders. He cannot have unsupervised meetings or communications with minors and cannot work or volunteer in any position that involves minors.

He will also register as a sex offender, consent to searches and computer monitoring and provide a DNA sample.

The charges come six weeks after authorities raided Fogle’s suburban Indianapolis home, a raid that led Subway to suspend its relationship with the former pitchman. On Tuesday, Subway said it had ended that relationship and wouldn’t provide additional comment.