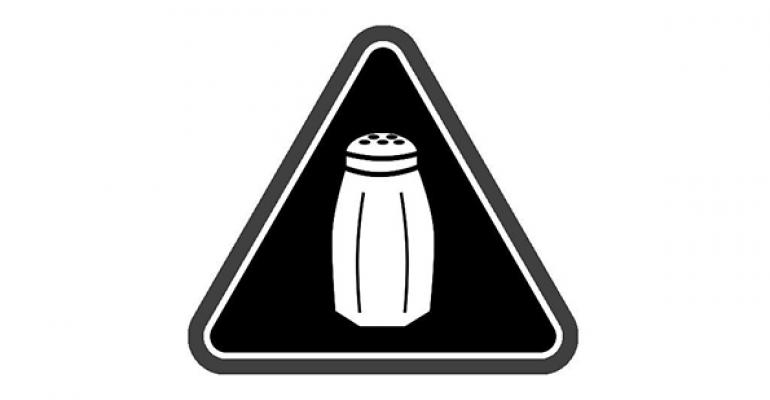 New York City’s Board of Health voted unanimously Wednesday to require restaurants with 15 or more units nationwide to add warning labels on menu items that exceed the recommended daily limit of 2,300 milligrams of sodium.

The new labeling rules require high-sodium items be marked with a salt-shaker symbol in a equilateral triangle. The rules go into effect Dec. 1, and violators will face a $200 fine. New York is the nation’s first city to require the sodium labels.

“It is disappointing the Department of Health has decided to go forward with sodium menu warning labels when more comprehensive federal regulations take effect next year,” Melissa Fleischut, president and CEO of the New York State Restaurant Association, said in a statement.

“The establishments that fall under these new regulations will be forced to construct costly new menu boards in consecutive years," Fleishchut said. "This is just the latest in a long litany of superfluous hoops that restaurants here in New York must jump through. Every one of these cumbersome new laws makes it tougher and tougher for restaurants to find success.”

But members of the city’s health board said the rising concerns about salt in American diets made the new measure helpful to the public.

"This really represents, to me, the next step in allowing usable information for our community to make better health decisions," board member Dr. Deepthiman K. Gowda told the Associated Press. "My hope is that this impacts not only consumer practices but also impacts the practices of our restaurants."

“Probably the first thing a restaurant should consider is to revise their recipes,” Barrash said, in order to avoid the 2,300 milligram sodium threshold. “That way, they wouldn’t have to put that symbol on their menu.”

“If restaurants can adjust their recipes in such a way that it lowers the below the 2,300 milligrams, they don’t have to put the information on the menu,” Barrash said.

She added that the short timing before the Dec. 1 deadline could be the No. 1 challenge for restaurant companies.

In addition to putting the salt-shaker icon on menu items, restaurants must post a warning next to the point of sale that states: “The sodium (salt) content of this item is higher than the total daily recommended limit (2,300 mg). High sodium intake can increase blood pressure and risk of heart disease and stroke.”

The average American consumes about 3,400 milligrams of sodium each day, the Centers for Disease Control reports. The Federal Drug Administration recommends some adults — especially those who suffer hypertension, are African-American or age 51 or older — limit their sodium intake to 1,500 milligrams a day.

New York City has regulated menus in the past, banning trans fats and requiring chain restaurants to post calorie counts. The city’s efforts to ban the sale of sodas and sugary drinks larger than 16 ounces were rejected in June 2014 by the state’s Supreme Court.