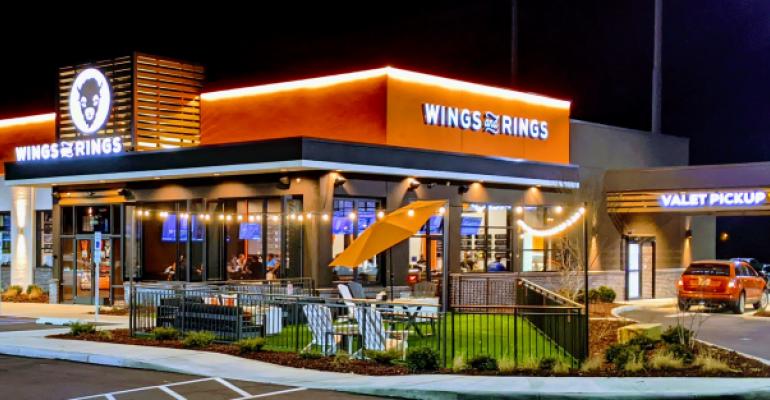 Wings and Rings
Wings and Rings has launched a remodel program to bring the rest of the 85-unit chain in line with the new prototype in Cincinnati, which opened in late 2020.
Operations>Franchising

Wings and Rings to allow use of Bitcoin as franchise fee

With cryptocurrencies gaining mainstream acceptance, will the restaurant industry embrace the use of digital assets?

Restaurant operators who are cash poor but crypto-rich may have an opportunity with the Wings and Rings chain.

Related: Consumers can now convert bitcoin or frequent flier miles to cash and reload their Starbucks cards to pay for lattes

The move follows an incentive program launched in 2020 that waived the franchising fee and royalties for the first six months of operation, which will remain in effect through 2022, the company said. This year, however, the chain will tweak that incentive to allow the $40,000 franchise fee to be paid in Bitcoin, one of the leading cryptocurrencies that has made inroads into mainstream finance.

Thomas Flaherty, Wings and Rings chief development officer, said the goal is primarily to send a message that Wings and Rings is a “forward-thinking company embracing what the future brings.”

The 85-unit chain in late 2020 rebranded and dropped the word “Buffalo” from the name, in part because of guest confusion with competitor Buffalo Wild Wings, he said. That year, Wings and Rings opened a new prototype in Cincinnati with the new branding and a significant focus on technology built around a new POS system. The new prototype, for example, features a drive-thru pickup lane for digital orders.

Flaherty, who said he has been a cryptocurrency investor for about seven years, wanted Wings and Rings to wade in and test the waters.

Across the country, interest in the world of decentralized finance, or DeFi, is growing as blockchain-based investments creep more fully into the mainstream. According to the Wall Street Journal, Pew Research Center estimates that about 16% of the U.S. population holds or has held cryptocurrencies.

Last year, a number of restaurant brands tiptoed into use of non-fungible tokens, or NFTs — digital media verified as authentic by blockchain technology — in promotions, including Taco Bell, Pizza Hut and Applebee’s.

Starbucks’ app has integration with the Bakkt digital wallet platform through which guests can convert digital assets into dollars to reload their Starbucks card.  Select Subway stores have reportedly accepted Bitcoin for payment as far back as 2013.

But the use of crypto as a mainstream currency for payment is still five to 10 years away, argues Flaherty.

In accepting crypto as a franchise fee, Wings and Rings would face the decision of converting it immediately to dollars or holding it as an investment, as some companies are doing. Cryptocurrency is complex and full of risk, Flaherty said. “It’s very erratic, so not for the faint of heart, for sure.”

For the company, the risk would be far greater if Wings and Rings were planning hundreds of units this year, but only six franchised locations are planned for 2022 — and no one has jumped at the Bitcoin option yet.

“We really just started publicizing it,” Flaherty said. “I didn’t expect a lot of people would rush in, but I am excited about the opportunity for it to happen.”

Flaherty hopes the move will attract forward-thinking franchise operators who are open to a changing world, he said.

“I believe over the next five years you’ll certainly see a lot more experimentation [with cryptocurrency], and that’s part of the reason why we wanted to wade in and not wait,” he said. “I don’t expect we’ll be going to Starbucks and paying with Bitcoin in the next five years on a regular basis, but 10 years from now? Probably.”