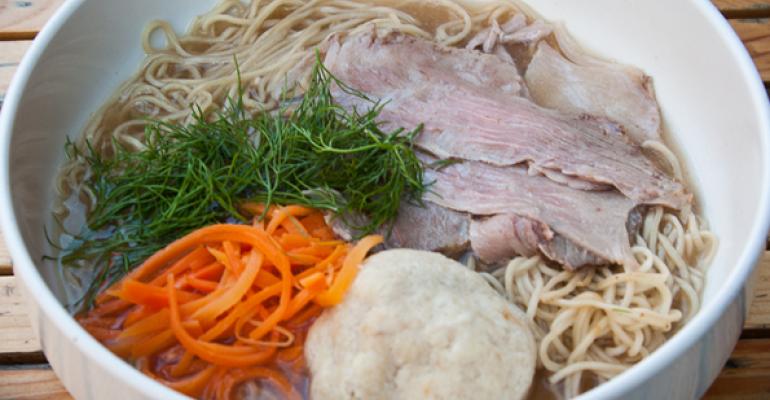 Why ramen is trending in U.S. restaurants

NRN senior food editor Bret Thorn gives a weekly rundown of the latest news and trends from the culinary world. Tweet thoughts and suggestions to #NRNFoodInsider.

Ramen is on the mind of New York City’s trend-focused diners following an opus written last week by the Times’ Pete Wells about the noodle soup.

Better known in the United States as the cheap packaged noodles that are a go-to meal for college students, ramen has for several years now been a passion of food fetishists in cities like Los Angeles and New York. Foodies there obsess over the details of broth, noodle texture and the possible merits or faults of slow-fried intestine and pork belly fat as they seek out the latest, coolest, most obscure place for late-night slurping.

Happy to oblige New Yorkers’ penchant for hidden gems that no one else knows about — something they share with the good people of Tokyo — pop-up ramen shops have started appearing after hours in other restaurants, as Wells details.

He then lists what he deems the top 10 ramen destinations in the city, along with a nice list of also-rans.

As New Yorkers swooned over those possibilities, Gothamist broke the news that ramen manufacturer Sun Noodles, the Teterboro, N.J.-based supplier of many of the noodles that Wells praised, was opening its own restaurant and demonstration facility in the city this spring. The Ramen Lab will offer “ramen flights” that allow people to taste a variety of versions of the noodle, as well as a regular menu.

Love for ramen is well established in Los Angeles, and getting there in New York, but smaller cities are finding their noodle groove, too, as indicated by Andrew Glarneau’s review of Sato in Buffalo, N.Y., where he laments at some length that chef Satomi Smith’s ramen wasn’t available during his visit.

Not surprisingly, Chicago has its own take on ramen love, and, as Chicagoist reports, this weekend Yusho, the Japanese street food restaurant owned by Matthias Merges — for many years the executive chef at Charlie Trotter — is hosting its second Ramen Battle, in which chefs Abe Conlon of Fat Rice and Jason Hammel of Lula Café will compete to delight the most guests with their noodle soup.

Philadelphia, too, has a not inconsequential ramen scene, as Inquirer critic Craig LaBan reminds his readers. But he warns them, as more ramen shops spread in the City of Brotherly Love, not to forget an obvious stop: Morimoto. The joint venture between the Iron Chef and iron restaurateur Stephen Starr has boosted its ramen bona fides by going beyond its chicken soup ramen to include a bowl laden with pork belly.

In Seattle, ramen is so well established that local Asian noodle expert Jay Friedman thinks it has jumped the shark, taking on unnatural characteristics not intended for the simultaneously humble and revered noodle soup. He suggests that instead of misguiding diners into thinking they’re eating the real thing, Westernized versions of the noodle dish should be called wramen (pronounced “double-u ramen”).

He adds that it’s not to say some wramen isn’t delicious — it’s just not ramen. He provides examples of wramen and ramen across the city, and a list of do’s and don’ts for the purists.

Tweet thoughts and suggestions to him with hashtag #NRNFoodInsider