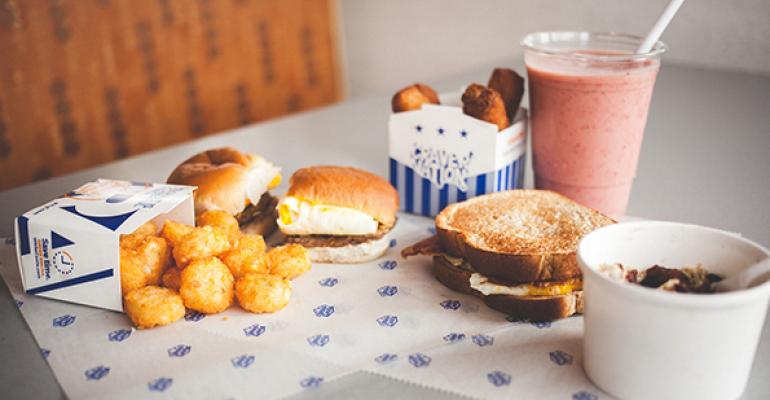 “Anything, Anytime” menu adds breakfast items at lunch and dinner

Consumer requests for eggs in the afternoon has led another Midwest-based restaurant chain to start serving breakfast all day: Columbus, Ohio-based White Castle.

The venerable burger chain, which is nearly a century old, started offering its breakfast sandwiches alongside its traditional sliders on Wednesday in what it calls its “Anything, Anytime” menu. In so doing, it beat larger rival McDonald’s to the punch by a month.

“We feel it’s our civic duty to be able to give people what they want, when they want it,” said Jamie Richardson, White Castle vice president. “It’s 2015. We should be able to do that.”

White Castle is a 94-year-old brand with 392 locations, three quarters of which are open 24 hours. Consumers have long been able to order the chain’s burgers in the morning. But the chain has limited its breakfast hours to 5:30 a.m. to 10:30 a.m. since it first started selling the Sausage or Bacon Breakfast Slider in 1986.

The company recently started testing its Anything, Anytime menu in Cincinnati and New Jersey, with positive results that helped the chain learn how to serve eggs alongside burgers at all times of the day.

“We didn’t aggressively promote it,” Richardson said. “But even without the aggressive promotion, we got something positive, and we got tremendous learning out of it.”

In addition to the all-day breakfast, White Castle is expanding its menu, making permanent a line of waffle sandwiches that had become popular limited-time offers for the chain, including Waffle Breakfast Sliders, the Chicken & Waffle Slider and the new Sausage & Gravy Slider.

“We’ve had great success with that sandwich line,” Richardson said. “The menu is expanded, and expanded permanently.”

White Castle chose September to introduce all-day breakfast to coincide with National Breakfast Month, Richardson said. The company is also working with the American Egg Board to share a message that the company has always used freshly cracked eggs in its breakfast items.

The company added new grills to all of its restaurants over the past three or five years to prepare the chain for menu expansion.

Richardson said the major obstacle in making the change has been in understanding how to use its grill space.

The other issue, he said, is making sure employees are good with the change. Yet White Castle has a veteran workforce that should be able to handle the shift. “Out of our 10,000 team members, a total of one in four have been with the company 10 years or more,” Richardson said. “We feel we’re better positioned to be able to do this. We have great people behind the counter.”

Indeed, Krusteaz, the maker of pancake and waffle mixes, said in a recent report that nine out of 10 Americans will occasionally eat breakfast for dinner.

A number of restaurant chains have made breakfast available all day, including Golden Corral this summer and, coming in October, McDonald’s.

White Castle said it was customer surveys, not outside reports that made the company make the change. “It’s always good to know what’s going on around us,” he said. “But when we talk to our customers, that’s most compelling to us. Those are the people we know. But it’s gratifying to see other external sources support the direction we’re going.”

The move does come amid high egg costs, thanks to an Avian Flu outbreak earlier this year. Richardson acknowledged the pressure on costs, but said the company had to think for the long term. And egg costs will come down again.

“We don’t see (high egg costs) as the new normal,” he said. “We don’t want to let the pressures of something we’re facing that probably isn’t long-term deter us from doing the right thing for customers.”