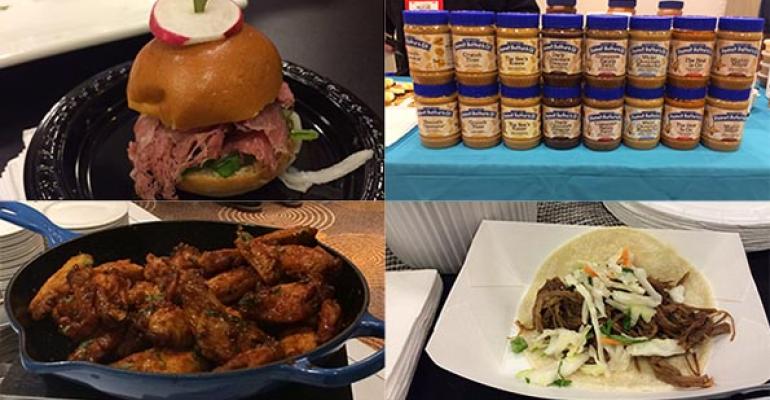 This is part of Nation&rsquo;s Restaurant News&#39; special coverage of the 2015 MUFSO conference that took place Sept. 20&ndash;22 at the Hyatt Regency at Reunion Tower in Dallas.

Consumers are increasingly interested in knowing the story behind their food, according to many of the speakers on the culinary-themed panels at MUFSO. This consumer mindset was also very much in evidence at the Supplier Exchange trade show, where much of the food presented had distinctive origins or attributes that distinguished it from the ordinary.

An entire panel was devoted to strategies for sourcing local and sustainable foods, but panelists observed that if they couldn’t find enough of a particular kind of produce locally to meet their needs, there were other ways to show culinary connections with their community.

Richard Ginzel, general manager of the New Orleans Convention Center for Centerplate, gives the venue’s offerings local flair by selling local beers and locally made snacks, sodas and ice cream, as well as by teaming up with local chef Donald Link to develop menu items.

Local can have a broader definition as well.

Catherine Lederer, vice president of food and beverage at New York-based fast-casual salad chain Chop’t, said that regional purchasing — such as buying produce from Vermont for her New York restaurants — still supported farmers in the area and gave the products a good origin story.

Yet some restaurants differentiate with very local products.

In a panel discussion on “finding the right menu mix for your brand,” Stan Frankenthaler, senior vice president for food and beverage innovation and menu development for CraftWorks Restaurant & Brewery Group, said the group’s Old Chicago restaurants all had 36 beer taps, of which 12 are “hyper local,” focusing on beers from within the community it serves or near it.

Another approach was that of Seneca Foods, which contracts with farmers to grow what the supplier wants, so Seneca knows exactly where it comes from and can “control it from seed to delivery,” according to the exhibitor.

In the menu mix panel, Dave Jenkins, managing director for client solutions at menu research firm Datassential, said that consumers were looking for positive qualities in food — something unique and possibly premium that would distinguish it. He said that these days, items that are only promoted for their value or affordability actually are viewed negatively.

“If your only message is about value and affordability, you’re not going to get those high, rock-star ratings,” he said.

In the panel on local items, Lederer said she added distinctiveness to her salads by using different varieties of the same vegetable — such as watermelon radishes and black radishes.

Royal Cup distinguished its cold-brewed coffee by making it out of Rain Forest certified HC Valentine coffee, named after the grandfather of the company’s founder.

Other value-adding tactics included Joe Froyo from The Dannon Company, which has added health attributes, including being fat free and high in protein, as well as being “Active Culture Certified,” meaning it contains probiotic bacteria.

Sweet Street Desserts had a variety of distinctive callouts in its offerings, including single-origin chocolate, butter, clean labels and on-trend flavors, such as the ice cream sandwich cookies it served made of salted caramel crunch cookies with white chocolate, sandwiching salted caramel gelato.

Many of the exhibitors at the Supplier Exchange were highlighting what they had taken out of their food. Volpi Salumi was promoting the fact that its cold cuts were not treated with nitrates or nitrites, while Dr. Praeger's was offering all-natural and gluten-free items as well as those that didn’t contain genetically modified organisms. Emmi Roth was displaying a new all-natural melting cheese that was not processed and free of preservatives. Peanut Butter & Co. was promoting the fact that its items were all natural and GMO free. The peanut butter exhibitors also pointed out that they only used American peanuts.

Peanut Butter & Co., also had peanut butter in pumps, Schwann Foodservice had pizza crusts ready for topping, as well as grab-and-go desserts co-branded with branded candy such as Hershey’s and Reese’s, leveraging those brands’ reputation.

Wrigley also had gum kiosks available to set up at counters for virtually labor-free sources for incremental sales, and Ventura Foods had squeezable tabletop bottles of its signature and perennially popular Hidden Valley Ranch dressing.

Culinary mashups were on display at the Supplier Exchange, including pastrami báhn mì sliders at the Tabasco booth and pulled pork with coleslaw — a classic Southeastern combination — served in corn tortillas by Olé Foodservice. During one of the breaks between educational sessions, Ventura Foods served chicken wings basted in the increasingly popular Korean chile sauce gochujang.

At the Shake, Sparkle & Stir cocktail competition, two of the three contestants used increasingly popular rum — including some locally distilled bottlings — two used super-trendy ginger, and all three used herbs to add savory elements to their drinks, including basil and even cilantro.