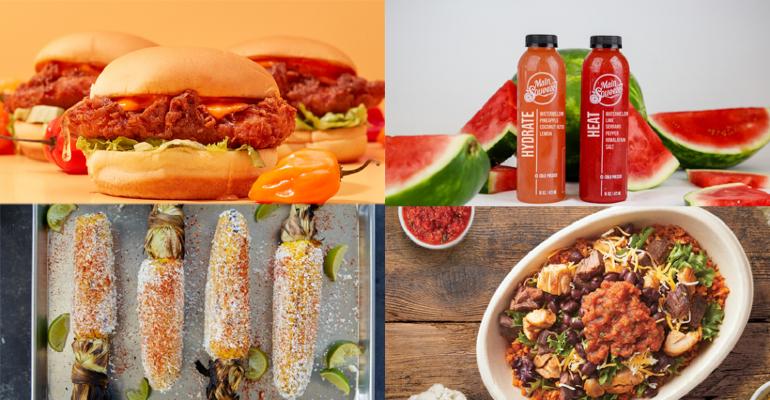 Start Slideshow ›
Cauliflower rice and hot honey proliferated, chicken thighs gained new footing, and it was the summer of watermelon and corn

Riced cauliflower, as you probably know by now, is cauliflower that has been run through a ricer or similarly resized into something resembling rice and used as a substitute for the grain. It is so popular that it is now considered a form of rice by some people and simply called cauliflower rice, just as chicken breast shaped sort of like a wing is now called a boneless wing.

Speaking of chicken, more spicy items made from that bird were added to menus in 2021, and thighs were increasingly cooked like wings, and also were boned and served in sandwiches.

Related: The year in beverages: Notable thirst-quenchers in 2021

Bacon, lettuce and tomato, a perennially popular sandwich, was also used in salads, on burgers (well, they’ve always been there), on chicken sandwiches and in tacos and quesadillas.

The blend of poppy seeds, sesame seeds, dried garlic, dried onion and salt that coats an “Everything” bagel is now a spice blend in its own right, like za’atar, dukkah or shichimi togarashi, and is being used on cookies and pastries, in salads, cocktails and more.

Related: A closer look at the menu trends that are driving traffic across all segments

More coffeehouses embraced oat milk as a dairy alternative in the past year, hot honey continued as a favorite condiment on sandwiches, pizza etc., and this summer seasonality was celebrated with watermelon and corn