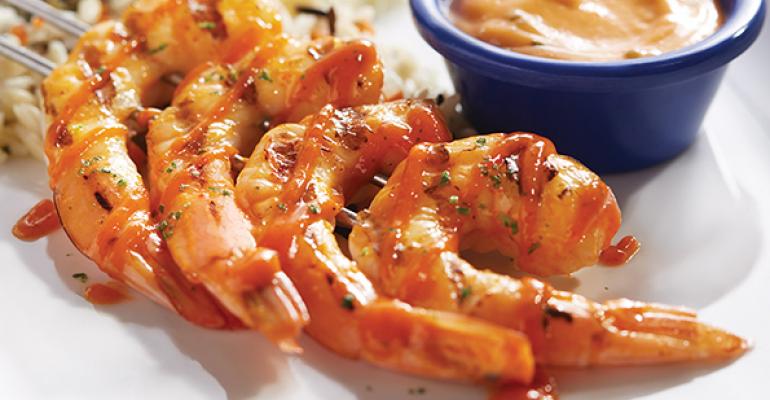 The majority of Americans now enjoy spicy foods, marking a major shift in consumer tastes, according to two research firms. Restaurant chains large and small are responding with a wide array of chile-spiked menu items.

The NPD Group recently reported that 56 percent of U.S. households keep hot sauce in their kitchens. That figure corroborates findings from Technomic Inc., which found in its Flavor Consumer Trend Report, released in October 2013, that 54 percent of consumers rated a strong preference for spicy foods, a marked increase from 48 percent in 2011 and 46 percent in 2009.

People ages 25 to 34 show the strongest preference for spicy food, according to Technomic, with 68 percent rating their preference for hot or spicy foods, particularly spicy sauces, dips or condiments, at 7 or higher on a scale of 1 to 10.

NPD’s recent audit of U.S. kitchens found that the relatively new and trendy hot sauce Sriracha is already in 9 percent of U.S. households, and in 16 percent of households headed by someone under the age of 35.

NPD’s SupplyTrack found that cases of hot sauce shipped to foodservice outlets have increased by double digits over the past two years.

“Hot sauce is clearly part of the diet of many U.S. consumers, and it’s a food that crosses gender, age, ethnicity and income,” Annie Roberts, vice president of NPD SupplyTrack, said in a press release.

NPD’s ongoing National Eating Trends research finds that women ages 18 to 44 and ages 55 to 64, as well as men ages 18 to 54 and over 65 consume more than the average amount of hot sauce per year. Southerners eat more hot sauce than anyone else, with Easterners lagging behind.

Restaurants continue to roll out new items with Sriracha. In January, Orlando, Fla.-based Red Lobster introduced Extra Jumbo Spicy Sriracha-Grilled Shrimp as a special at its 679 units. The large U 16-20 shrimp is grilled over wood oak and basted with Sriracha.

In February, Applebee’s introduced Sriracha Shrimp at its more than 1,800 domestic restaurants. The breaded, fried shrimp is tossed with barbecue spice and Sriracha chile-lime sauce.

California Tortilla, based in Rockville, Md., is using Sriracha pickled onions in its new Ramen Burrito, which includes a choice of protein with sweet red chile, avocado, spinach, corn, scallions and cilantro, as well as ramen instead of rice. The burrito is available through April at the chain’s 40 locations.

Louisiana-style hot sauce remains the most popular sauce in terms of cases shipped to foodservice outlets, but habanero is coming on strong, especially sauces that have fruit flavors, such as habanero mango, according to NPD.

Habanero hit the mainstream in June 2013, when McDonald’s put it on its Bacon Habanero Ranch Quarter Pounder, but its run continues into 2015, when Dunkin’ Donuts put it on its Spicy Omelet Breakfast sandwich at its more than 7,600 domestic locations. The sandwich also has egg, bacon, jalapeño peppers, red bell peppers and pepper Jack cheese.

Bonefish Grill is using habanero vodka in the Oyster Shooter at its 194 locations. The shooter is an oyster in a shot glass with cocktail sauce and salsa verde, as well as the vodka.

NPD reported that the amount of both chipotle and Sriracha sauces doubled in 2014, compared with the previous year.

Bruegger’s Bagels has introduced a new Turkey Chipotle Club, available at its 293 locations. The sandwich is made with turkey, peppered bacon, chipotle mayonnaise, arugula and tomatoes, and served on an everything bagel.

One of Hooters’ March Madness specials, Porky’s Revenge, is a hot dog smothered in chili and topped with shredded Cheddar cheese, onions and diced jalapeños.

Cayenne pepper is also popping up on menus, particularly among the juicing crowd, which perceives it as healthful. Planet Smoothie recently introduced a Lemon Cayenne Kick to its 1,001 locations. The beverage is made with cayenne pepper, lemon juice, coconut water and mango.

Sonic Drive-In is using cayenne in the marinade of its new Spicy Super Crunch Chicken Strips, available at its more than 3,500 locations. The breading of the fried chicken breast strips is flavored with spicy red pepper, garlic and onion.