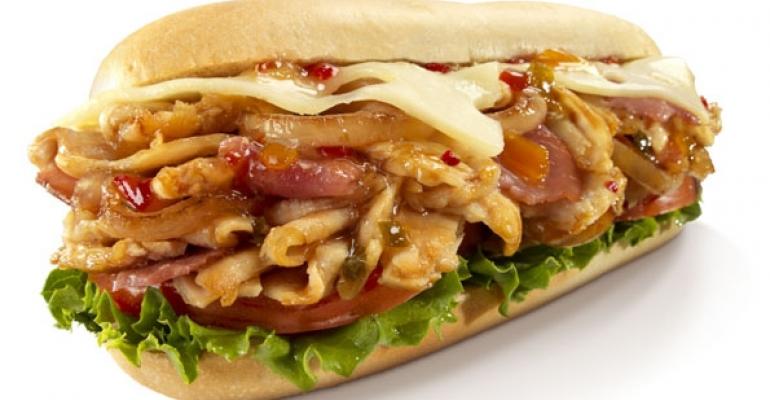 Industry experts are findining that spicy flavors are gaining popularity on restaurant menus for a variety of reasons.

Trend watchers speculate that changing demographics, a younger generation’s penchant for gastronomic adventure and more people developing a taste for it are driving the popularity of spicy food in the United States.

Regardless of why spicy food is spreading, industry experts don’t deny that it’s happening.

“It seems to be the way the world is going,” said Subway executive chef Chris Martone.

“Our Buffalo chicken’s a great protein for us,” Martone said, noting that many customers double up on spiciness, combining pepper Jack with hot sauce or jalapeño peppers, or adding any or all of those items to Buffalo chicken sandwiches.

Some Subway units also have spicy regional favorites, such as giardiniera, the piquant pickle mixture that gives a Chicago delicacy, the Italian beef sandwich, its distinctive flavor.

Martone said suppliers manufacture giardiniera for Subway units in Illinois and Indiana, whose customers enjoy it. “You have to have it in Chicago,” he said.

In a 2011 consumer trend report, restaurant research firm Technomic found that hot or spicy foods appealed to 48 percent of American consumers, up by 2 percentage points from 2009.

But it’s not those adventuresome youngsters who are driving the hunger for hot food. Older Millennials and Generation X — those ages 25-44 in 2011 — were most enamored with spicy food. Fifty-seven percent of surveyed consumers ages 25-34 ranked their preferred level of heat at seven or higher on a scale of one to 10, up from 48 percent in 2009. Fifty-five percent of those ages 35-44 reported the same, up from 42 percent in 2009.

Figures dipped slightly with other age groups, most dramatically with those ages 55 and older, which dropped from 44 percent to 38 percent.

On restaurant menus, descriptions of spicy food have also grown. Research firm Datassential tracks more than 120 terms for spicy food on chain and independent restaurant menus. Of those terms, more than 70 grew in popularity between 2008 and 2012, including Thai chile, roasted poblano and chipotle. The fastest-growing descriptors are Southeast Asian Sriracha, Chinese chili oil and North African harissa.

Datassential doesn’t track Korean descriptors, such as kimchi, as part of its spicy listings, but that cuisine’s flavors — once only found in ethnic enclaves — are spreading at chains. For instance, California Pizza Kitchen recently put a Spicy Korean Barbecue Pizza on its menu. It features Korean barbecue pork and a nontraditional kimchi made with Napa cabbage, cilantro, carrots and cucumber tossed with Sriracha vinaigrette.

Its other two tacos are Carnitas Verde, with enchilada sauce, onion-cilantro relish and Monterey Jack cheese, and Havana Chicken. Although Cuban food is not typically spicy, California Tortilla’s interpretation is doused in the chain’s signature spicy Havana sauce, along with Monterey Jack cheese, pico de gallo and avocado.

Although the consumer drive for spice is unclear, some chefs are moving toward it for health reasons.

Seasons 52 executive chef Cliff Pleau previously told Nation’s Restaurant News that spice can provide satisfaction that might otherwise be sated by starch or fat. An example is his Curry Soup, which has lean chicken breast, apples, lime, ginger, lemon grass and cilantro, along with curry and spicy chiles. A 10-ounce serving has only 290 calories and three grams of fat.

Managing partner Nick Kenner said the chain has also put a limited-time spicy Buffalo dressing on its permanent menu due to its popularity.

Kenner said he discussed the spice phenomenon with Just Salad chef Laura Pensiero, who speculated that the popularity of Buffalo wings and Mexican food has sparked consumer interest in spicy food.

“People are looking for spicier food in other formats,” Kenner said. “It’s definitely something we’re seeing our customers want.

“Chef Laura really likes pairing the hot with mandarin oranges because the fruitiness and wetness really pairs well with the jalapeños, and she’s right,” he added.

The spicy version is punched up with a jalapeño cole slaw made with cabbage, slivered jalapeños and a roasted jalapeño dressing. The sandwich also includes melted aged Cheddar, toasted bacon and barbecue sauce, and is served on jalapeño Cheddar bread. “It’s a five or six out of 10 on the spicy scale,” Graff said.

“In the past, we’ve run with one sandwich as an LTO, and I kind of thought we should have two of them — one for customers that want to play the safe road,” he said. “But I’m an adventurous diner, so I wanted something that might be a little more adventurous for people who like to have fun. Quiznos is known for having unique flavors, and I thought that was appropriate for us to do.”