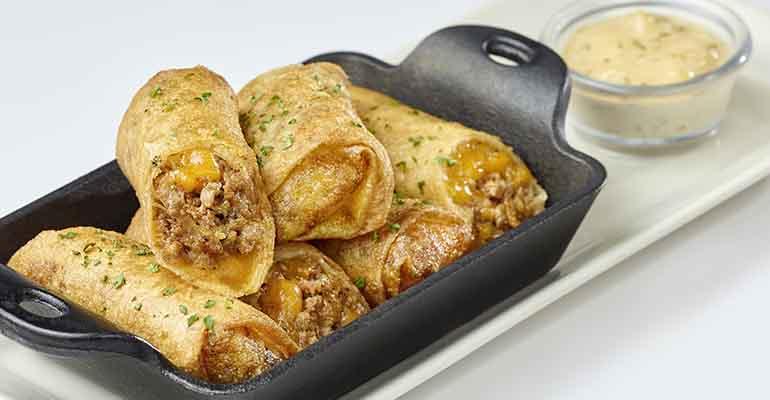 Reimagining the humble cheeseburger in the age of COVID-19

From cheeseburger omelet to cheeseburger sushi, comfort food’s reign during the pandemic has led to creative takes on the classic burger

The consumer quest for shelter from the pandemic storm has led many restaurateurs to reimagine tried-and-true comfort classics, chief among which is the cheeseburger. While its origin is in some dispute, most food historians date the addition of a piece of melty cheese to a sizzling burger patty to the 1920s. Its appeal is undimmed a century later as the familiar, reassuring combination remains culinary catnip for diners and a surefire source of culinary creativity for chefs.

Around the menu. The cheeseburger provides a jumping-off point for a wide range of dishes. Diners craving breakfast fare at dinnertime can choose the cheeseburger hash at Beaker & Gray in Miami, which is topped with bacon, aji amarillo pepper and chili. Just up the Florida coast, Over the Bridge Cafe in Delray Beach wins rave reviews from the breakfast/brunch/lunch crowd for the Drunken Cheeseburger Omelet, which gets its memorable moniker from ground beef simmered in craft beer.

Way across the country at the Seattle-Tacoma International Airport, the cheeseburger cheeseburger soup has provided respite to weary travelers at Rel’Lish Burger Lounge, where the familiar ingredients of ground meat and cheese are combined in beef stock and topped with french fries and pickles.

At the quickly-growing I Heart Mac & Cheese chain, the All-American bacon cheeseburger mac and cheese can either be consumed in a bowl or a grilled cheese sandwich, and Boston Market’s brand new late night menu boasts the cheeseburger mac bowl consisting of macaroni and cheese mixed with pico de gallo, cheddar, barbecue sauce and the chain’s signature meatloaf.

For a limited time this summer, french fry fanatics could indulge in the western fries at Carl’s Jr. Coated in seasoning that mimicked the taste of the chain’s popular Western Bacon Cheeseburger, they seduced the senses with aromas of barbecue, charred beef, cheese and sesame seeds and were described on Twitter as akin to “sprinkling 1,000 tiny Western Bacon Cheeseburgers on your fries.”

Around the world. The cheeseburger easily assumes an international accent in fun items like the folded cheeseburger pita made with white cheddar and garlic aioli at Miznon, the New York City outpost of a Tel Aviv operation selling Mediterranean-inspired street food.

Looking to another part of the globe for inspiration, the cheeseburger spring rolls at The Cheesecake Factory combine ground beef with melted cheese and grilled onion, all rolled in a crispy wrapper.

Atop a pizza. Piemakers are all about cheeseburger, with several new versions introduced since the beginning of 2020. Boston’s Pizza Restaurant & Sports Bar and Uno’s Pizzeria and Grill launched meatless options at the start of 2020. The Cheezburger Pizza from the former places plant-based meat and cheese alternatives on a cauliflower crust, while the vegan cheeseburger pizza at Uno’s is topped with vegan burger crumbles, along with cheddar and mozzarella cheeses. 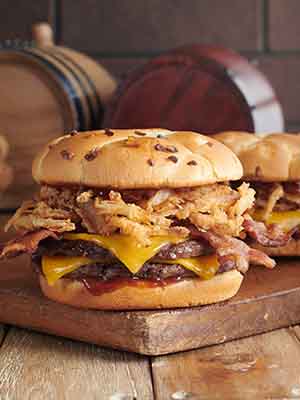 Kid stuff. Smart operators are taking advantage of the classic cheeseburger’s appeal to their youngest diners with new items created just for them. This summer saw the introduction of the cheeseburger double sliders to the Big Kid Zone menu at Friendly’s, which is meant to appeal to ages 8-12, and at the same time, Cracker Barrel introduced its Lil’ Barrel cheeseburgers served on slider buns with a side of Tater Rounds.