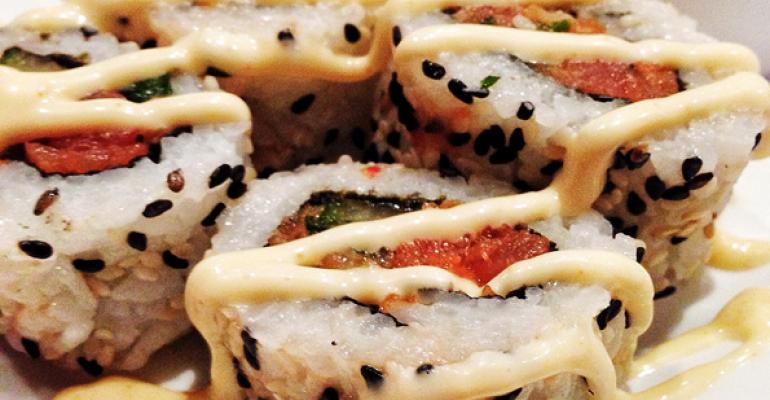 Pei Wei Asian Diner introduced sushi last week to its menu, following the completion earlier this year of a systemwide renovation of its restaurants.

The 192-unit fast-casual division of Scottsdale, Ariz.-based P.F. Chang’s China Bistro Inc., which has tested sushi in the past and over the past several months, also added smaller-sized entrée salads as part of a brand revamp.

KC Moylan, president of the Pei Wei division, said the menu modifications aimed to emphasize the brand’s “fresh and fast and affordable” image.

“We are very excited to launch sushi and small-size entrée salads starting at just $5.99, so our guests can enjoy the bold, fresh flavors they love at a size and price that’s just right for them,” Moylan said in a statement.

The systemwide sushi rollout highlights the brand’s efforts to provide price-point flexibility, which had already applied to the choices of two sizes of entrées, with smaller versions starting at $6.39.

Customers can order two sushi options at $3.29 for four rolls or $5.99 for eight. The offerings are:

The company has also added to its line of lettuce wraps, which were pioneered at the full-service sibling China Bistro, and have been a signature chicken item at Pei Wei since its founding. New versions include Thai Chicken and Korean Steak.

At restaurants in the Dallas market, for example, napkins and plates are no longer laid out on the tables but available at the drinks and servingware area. Some locations have added more seating for single diners.

The new look and menu has evolved under the ownership of Centerbridge Partners L.P., the New York-based private-equity firm, which completed in July 2012 a $1.1 billion purchase of P.F. Chang’s China Bistro that took the chain private.

Pei Wei has restaurants in 25 states.