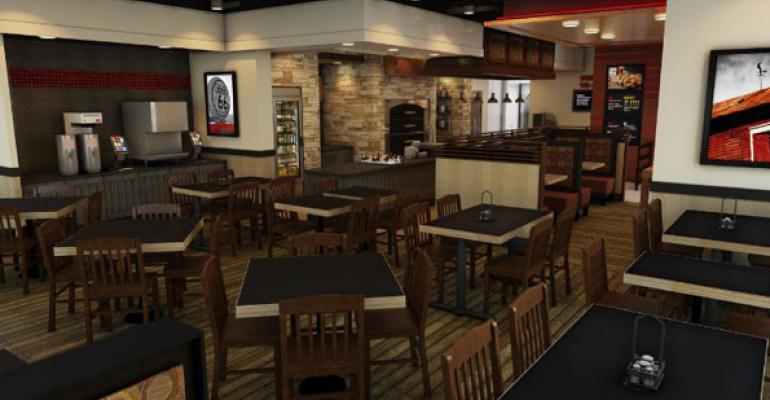 Chain aims to boost its lunch daypart and compete against fast-casual upstarts with the new prototype.

Pizza Hut opened two units this week built around a pizza-by-the-slice experience aimed at potentially evolving the brand to make inroads during the lunch daypart and to fend off competition from upstart fast-casual pizza brands.

A company-owned unit in Pawtucket, R.I., and a franchised restaurant in York, Neb., feature modern design elements that have spread from fast-casual restaurants into other industry segments, such as digital menu boards and open seating plans, as well as a pizza-by-the-slice “bar.”

The larger unit in York has 80 seats and will also emphasize the dine-in experience with sautéed pastas and a made-to-order salad bar. The Pawtucket location seats 30 people and will function more as a delivery-carryout restaurant with the additional by-the-slice feature.

Carrie Walsh, the new chief marketing officer for Pizza Hut’s U.S. system, said in a statement that the new restaurants would meet and exceed the needs of consumers, as well as “enter a competitive environment” like pizza by the slice in the Northeast “with a very competitive product.”

It also would give Plano, Texas-based Pizza Hut new footing in the lunch daypart, where several young fast-casual pizza brands are looking to build their market share. Much of the fast-casual sector’s activity revolved around pizza last year, with chains like Pie Five and Your Pie ramping up growth plans and other brands like Pizzeria Locale and PizzaRev attracting the investment of larger restaurant companies like Chipotle Mexican Grill and Buffalo Wild Wings, respectively.

However, Pizza Hut developed its new-concept stores to meet customer demand, not the challenge of the new fast-casual segment, spokesman Doug Terfehr said in an interview.

“We pay attention to our consumer trends, one of which is them seeking a quick on-the-go option, and one of our solutions for that is pizza by the slice,” he said. “We’re not reacting or responding to what the others are doing with speed. It’s about understanding our broader pizza fan. They’re looking for a convenient option, and this is an inviting environment to bring that to them.”

Pizza Hut is acting prudently to recognize how that segment is changing pizza fans’ expectations, especially at lunch, which has always been a daypart in which the legacy chains like Pizza Hut and Domino’s Pizza could build sales, he said.

“The convenience of being able to get a single-serve, value-oriented item is the play Pizza Hut is looking to get into and what fast-casual chains will continue to dominate,” Tristano said. “It’s a way to build more traffic at lunch with something that’s price-appropriate. It’s a smart decision.”

“It’s one of the major methods of delivering pizza that they haven’t done before,” Lombardi said. “This is absolutely appropriate and important. Couple that with walk-in traffic — think how well the Hot-N-Ready has performed for Little Caesars.”

Properly forecasting the production needs for pizza by the slice, so that the products look fresh and appealing but do not go to waste, would be a major challenge for adding that experience, he added.

Where Pizza Hut also needs to be cautious, Technomic’s Tristano said, is staying true to its positioning as a delivery and carryout leader.

“When you’re No. 1, you have more to lose than to gain,” he said, “so when trying to reinvent yourself to remain competitive and relevant to new customers, it’s important as long as you don’t turn off people who appreciate you for what you are.”

Pizza Hut spokesman Terfehr agreed, saying, “Delivery and carryout are still our core business, what we do well and what people come to us for.”

He added that delivery and carryout orders have followed typical patterns, with by-the-slice orders creating incremental traffic during lunch and somewhat in the evening, in the first few days of operation for the York and Pawtucket stores.

But don’t expect the by-the-slice format to appear in all new Pizza Hut units soon, Terfehr said. He conceded that a few more locations would open over the near term — and Pizza Hut’s chief development officer, Al Litchenburg, noted in a statement that the brand was “bullish on our plans to quickly expand them” — but most of the chain’s new domestic units would continue to carry the “Del-Co Light” design, which has helped Pizza Hut regain its momentum for net unit growth.

Pizza Hut opened 115 net locations in the United States in 2013 and has more than 7,750 domestic locations.

The brand is a subsidiary of Louisville, Ky.-based Yum! Brands Inc., which also operates or franchises KFC and Taco Bell in more than 130 countries.