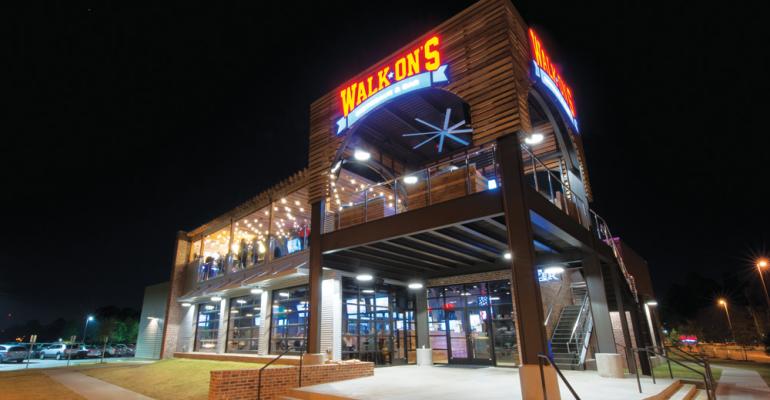 Walk-On’s Bistreaux & Bar is on a mission to bring Cajun food to the world.

They’re not purists about it, though. As the Baton Rouge, La.-based casual-dining chain seeks to expand, the leadership knows that it can’t be all about gumbo, boudin and crawfish étouffée. Besides, its burgers and mainstream sandwiches, such as Buffalo chicken, also sell well. Twenty-unit Walk-On’s currently has restaurants in Louisiana and Texas, but by the end of the year it will expand to Florida, Mississippi and Alabama, and in 2019 it will grow to South Carolina, Tennessee and Oklahoma. As the menu evolves, it’s the mission of Mike Turner, vice president of culinary and supply chain, to maintain the chain’s strong Louisiana identity, while also appealing to a broad base of customers.

He balances those two forces in Walk-On’s new menu, which debuted in September 2017.

“It was a pretty massive undertaking,” Turner said. “We affected about 60 percent of our menu, from upgrading our quality, bringing in new and exciting items, and repositioning things to where we thought they made more sense.”

New menu items include a Crawfish BLT salad made with fried crawfish, mixed greens, bacon, tomatoes, cucumber, carrots, feta cheese and vinaigrette spiced with Tabasco Pepper Jelly. The menu item takes a classic Louisiana protein and a beloved local brand’s spicy product and merges them with the spirit of a Greek salad, plus bacon. “What we’ve found is that our guests are looking for a more eclectic fusion of food, but from that Louisiana perspective,” Turner said. “They’re not the die-hard Cajun restaurant fans who want that over-the-top, cream-filled cuisine. They want that taste of Louisiana, but also the broad stroke of Americana that’s on our menu.”

He took a similar approach with the Venison Chili Nachos.

“We were a little concerned that [venison] might be polarizing for some of our guests, but we also felt like the guests who really got us wanted the experience of what we were offering,” Turner said. Other new items are more standard, like fried oysters served with waffle fries, cocktail and tartar sauces, hush puppies and garlic bread, or in a po’boy sandwich.

The po’boys are new, too, dressed with lettuce, tomatoes, mayonnaise and pickles, and filled with a choice of alligator, catfish, crawfish or fried oysters.

The alligator comes from Mark Glass, a Georgia farmer who raises them for the chain. He’s one of several small purveyors Turner works with, ensuring that all the shrimp comes from the Gulf of Mexico and the catfish comes from local farms. Boudin sausage is from a local purveyor, too, and the venison is all American, although much of the farm-raised venison eaten in U.S. restaurants comes from New Zealand (restaurants aren’t permitted to serve hunted venison). “We try to stay as true as we can to our Louisiana roots and bringing some of these smaller vendors along with us as we grow,” Turner said. “We’ve partnered up with Louisiana purveyors, allowing them to grow their business model with us.”