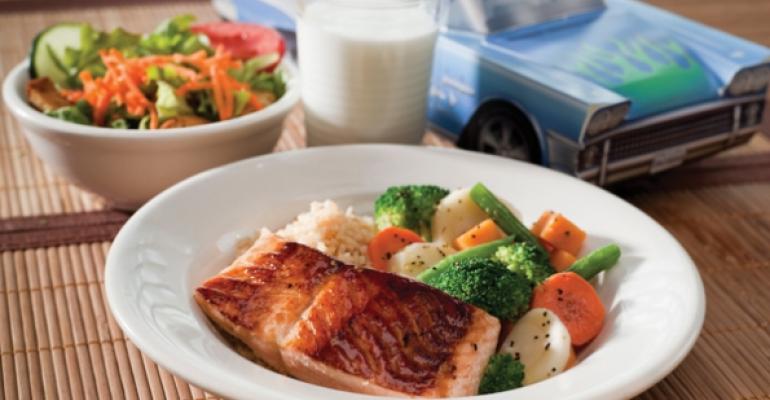 Nation&#39;s Restaurant News salutes culinary creativity with its annual MenuMasters Awards. Honorees will be celebrated at the Drake Hotel in Chicago on May 18. Read in-depth profiles of all 2013 winners &gt;&gt;

When Ype Von Hengst wanted to give the kids’ menu at Silver Diner a healthful bent, the co-founder and executive chef didn’t turn to white-coated R&D experts, trendwatchers or even parents. Instead, he went straight to the source, conducting tasting sessions with 31 diners ages 5 to 12.

After listening to the young diners’ reviews of a dozen or so items, the 14-unit chain launched its new kids’ menu with more than 20 new entrées last April. The menu reaches well beyond the typical kids’ fare to include more sophisticated items like Teriyaki Salmon and Bison Sliders, and side dishes such as brown rice, edamame and salad. In addition, all of the entrées now come with fruit or a vegetable and milk or juice.

“If you put French fries and home fries in front of kids, they will eat it,” said Von Hengst. “Kids don’t eat salmon because you don’t give them salmon.”

Von Hengst’s “if you build it, they will come” philosophy appears to be working. Since the revamped menu debuted last year, sales of salads are up 63 percent, strawberry sales have doubled, sales of mixed vegetable sides are up 31 percent, and entrée sales grew 2 percent. In contrast, sales of high-calorie sides are down 45 percent, and soda, which is not listed on the menu but can be ordered by request, is down 12 percent.

“It has been a big success for us,” Von Hengst said. “For business it has been tremendous. We are getting younger families back.”

The Rockville, Md.-based chain’s menu still boasts childhood staples and diner classics, such as pancakes, waffles, spaghetti, macaroni and cheese, and grilled cheese, but even those have been given healthful twists. At breakfast the Silver Dollar Pancakes, Gluten-Free or Belgian Waffle and Challah French Toast all now include a side of strawberries and an egg for extra protein. Macaroni & Cheese comes with a side salad, and Spaghetti with Mixed Veggies is made with whole wheat pasta and served with a choice of butter or tomato sauce. The ubiquitous Grilled Cheese gets a good-for-you boost by using whole wheat bread and replacing carb- and fat-laden French fries with a choice of strawberries or a vegetable.

In fact, you won’t find French fries on Silver Diner’s kids’ menu at all. Von Hengst took them — as well as home fries and soda — off the printed menu.

While diners are typically known for large portions of indulgent food, Von Hengst has always been passionate about including healthful options at Silver Diner. There’s been a Healthier Selections section on the diner’s main menu for some time. While he said adults are capable of making the choice to eat healthfully or heartily, kids often need more guidance.

“I really feel that it is our moral obligation to provide better and healthier fare for our kids,” Von Hengst said. “[They have] a much bigger awareness of what’s good for them, but they’re depending on us.”

Von Hengst’s longtime interest in making the kids’ menu more healthful was reignited in 2011 when Anita Jones-Mueller, chief executive and founder of Healthy Dining Finder, asked him to be an inaugural leader in the Kids LiveWell Program, a new initiative between the National Restaurant Association and Healthy Dining Finder. Kids LiveWell’s mission is to highlight the restaurant industry’s healthful offerings in order to help parents and kids more easily make healthier choices when eating out.

At the time, Jones-Mueller was looking for small chains like Silver Diner to develop and add to their menus a few items that met the stringent nutritional guidelines of Kids LiveWell. Kids LiveWell-approved entrées — which include a main dish, side dish and drink — must cover two or more food groups and have fewer than 600 calories, with less than 35 percent of calories coming from fats and sugars, and less than 10 percent coming from saturated fat. The meals must also contain almost no trans fat and fewer than 770 milligrams of sodium.

Von Hengst quickly committed to the challenge and has never looked back.

“It was something already in his whole being … his awesome vision for healthfulness,” Jones-Mueller said. “He has since then transformed his menu, increasing the healthfulness [and] quality of his ingredients.”

Today, half of the entrées and nearly half of the sides on the Silver Diner kids’ menu meet the Kids LiveWell criteria.

Julie “The Restaurant Mom” Casey, a kids’ menu consultant and founder of MyKidsPlate.com, attributed the success of Silver Diner’s menu largely to the fact that they asked kids’ opinions. While taste testing is by no means a unique strategy, Casey said the incidence of restaurants bringing in youngsters to do taste tastes is rare.

“I’ve been begging restaurants to do this for years,” she said. “It’s a terrible missed opportunity.”

Casey said items like Silver Diner’s antibiotic-free beef, turkey, chicken and bison; multigrain pasta; and gluten-free options are all highly innovative for kids’ menus, but what really makes them work is that they are also delicious.

Von Hengst, meanwhile, continues to develop creative, healthful fare for his youngest customers. Currently, he’s working on developing several vegan and vegetarian options for the kids’ menu. And when it comes time to decide what items to add, he won’t make the decision alone — in June he’ll bring in the kids for another tasting.