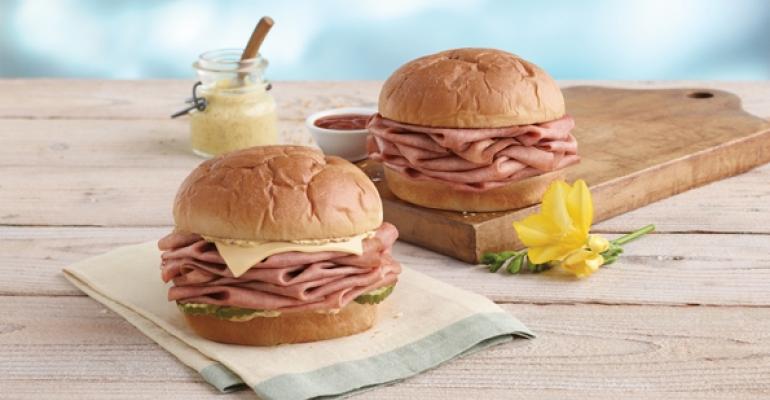 has introduced a new Taste & Share menu, which expands its line of shareable small plates.

• Bacon Mac and Cheese Bites: Made with three varieties of Cheddar cheese and served with a craft beer-cheese dipping sauce

is co-branding with King’s Hawaiian bread on two new sandwiches.

The 3,354-unit Atlanta-based quick-service chain is serving its Roast Beef and Roast Beef and Swiss sandwiches on the slightly sweet Portuguese-style bread.

The new items come with one-third more roast beef than the chain’s regular sandwiches. The Roast Beef and Swiss sandwich also has crunchy pickles and creamy Dijon spread. The sandwiches are priced at $3.99 and $4.59, respectively, and are available through the end of May.

Baskin-Robbins is highlighting berries in May with four new items.

The flavor of the month at its nearly 7,000 locations worldwide is Blueberry Shortbread Ice Cream, made with blueberry-flavored ice cream with a textured lemon shortbread cookie swirl. The ice cream is also used in a milkshake, mixed with milk and simple syrup.

In addition, Baskin-Robbins is offering a Mixed Berry Waffle Cone for the month, used in its Berry Waffle Crunch 31° Below, which blends vanilla soft serve with strawberry topping and pieces of the waffle cone.

All of the new items are available through May at participating restaurants. The chain’s ice cream scoops have a suggested retail price of $2.29-$2.49, with an additional 79 cents for a waffle cone. The 31° Below is priced between $2 and $4.99, depending on the size and location. Milkshakes are priced at $3.29-$6.29.

The chain is also offering a Coke Float in May and June, priced between $2.99 and $4.99. The item is made with vanilla or soft-serve ice cream and Coca-Cola.

The Offseason Training Menu, which has a total of less than 650 calories, includes an appetizer of Four Pepper Spiced Tuna served with pickled cucumbers and a creamy wasabi sauce, and a choice of either Mahi Mahi with Spinach Pasta Salad or Fresco Chicken Tacos. The menu is priced at $9.99-$14.99, depending on the location.

The Fresco Chicken Tacos are grilled chicken with salsa verde pepper Jack cheese in flour tortillas, served with a side of warm black bean and corn salsa.

The Fresh Favorite menu starts with a Tapas Trio — tomato bruschetta, hummus topped with basil chimichurri and olive tapenade with seasoned pita — and a choice of Chicken Summer Salad or Fresca Steak Tacos. The menu is priced at $7.99-$11.99

• The Bethenny Breeze has vodka, agave sour mix, club soda and a float of cranberry juice.

• The Moscato Rita has tequila, sour mix, Moscato wine and a splash of orange juice.

• The Salty Hound features vodka and grapefruit juice served with a salted rim.

• The Bare Naked & Soda has vodka, soda water and a splash of orange juice.

Champps’ sister chains Fox and Hound and Bailey’s, which total 78 units, are also offering Skinnygirl cocktails for $6 to $7.

The 400-unit Costa Mesa, Calif.-based company did not specify an end date for the offer.

Fazoli’s has introduced new toppings for its Baked Spaghetti and Baked Alfredo Bowtie pastas at participating restaurants in its 220-unit system as limited-time offers through May. Each item is priced at $1.49.