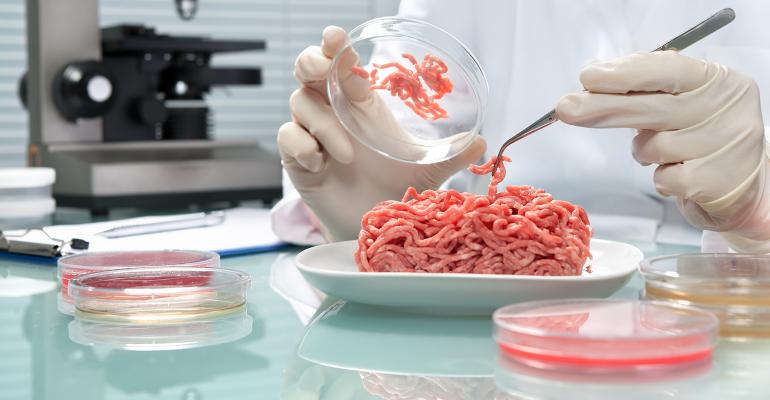 Kruse/Thorn: Looking to the future with lab-grown meat

Nancy, did you watch the TV series Minority Report?

If you didn’t, you’re not alone: It only ran for 10 episodes in late 2015 before it was cancelled.

But I liked it, mostly because it took place 50 years in the future, and, like the 2002 movie of which it was a sequel, it played around with possible future realities.

Global warming had already happened, so former seaside communities were now islands. People protested against genetically modified humans. And, in one scene that I found memorable, they walked through a meat manufacturing plant, where blobs of something resembling hamburger were being squeezed out of machines and onto slabs.

It was pretty gross, but the TV characters marveled that we once killed animals and ate them.

We spoke last year about the proliferation of plant-based protein, largely marketed as meat substitutes. But scientists are also tinkering around with animal-free, meat-based substitutes.

Basically, they extract cells from an animal and then coax the cells with nutrients until they divide, encouraging them to reproduce in a bioreactor similar to a fermenting tank. Ideally, the result is tasty meat made without having to raise, feed and kill animals, eliminating animal cruelty and pathogens, and greatly reducing greenhouse gas production. Uma Valeti, founder of Memphis Meats, one of several companies working on this technology, says he can produce lab-made meat using 90 percent less greenhouse gas than raising beef.

The technology is borrowed from the medical field, where scientists are working on lab-grown skin to treat burn victims, and, perhaps someday, whole replacement organs.

The requirements for lab-grown meat are not as demanding. The cells don’t have to function; they just need to stick together and taste like meat, and they need to be made inexpensively.

That has proven to be easier said than done. The first attempt at a lab-grown burger, produced in 2013, by vascular biologist Mark Post of Maastricht University in the Netherlands, cost around $330,000, and was described by food writers as “close to meat,” according to a Reuters report by Kate Kelland.

Apparently it’s difficult to get the cells of muscle, fat and connective tissue to grow in a proportion and composition that resembles actual meat. Research is underway to isolate meat stem cells that can reproduce indefinitely, removing the need to have animals in the picture at all, to find plant-based food for the cells and to develop growing surfaces that will get the cells to grow in a way that makes them meat-like.

As for the expense, Post has reportedly gotten the price of a burger down to $11 — still too high, but impressive nonetheless.

Meanwhile, Memphis Meats hopes to launch a product for public consumption in 2021.

So, let’s say scientists overcome the cost, texture and flavor obstacles and come up with tasty lab-grown meat. My question for you, Nancy, is: Is there a market for it?

Given the move by so many consumers toward natural products free of additives, are petri dishes really where people are going to turn for environmentally conscious, sustainable products?

Lab foods of the future out of touch with the times

Yikes, Bret, you stopped me in my tracks with the specter of that $300,000 burger, a sandwich only an oligarch could love. Even the new and improved $11 version seems a bit steep for a protein patty that never met its mother.

The lab-grown meat that you write about is only one of many food-related, tech-enabled ventures. Awhile back, the Chinese announced the building of a state-of-the-art factory dedicated to cloning beef in order to keep up with the population’s burgeoning demand for the meat. I’m assuming the project hasn’t gone smoothly, as Google provides woefully little follow-up intel. It may be that the longer-term plan to also clone dogs in the same plant was a little… off putting to potential investors.

Closer to home, San Francisco software engineer Rob Rhinehart leaned on a crowdfunding campaign in 2014 to provide seed money for Soylent, his meal replacement that promises to provide a complete blend of necessary macro- and micronutrients.

Available in liquid or powder form, it sounds to me a lot like Ensure for Millennials, although I guess we have to applaud Rhinehart from stepping away from the M&Ms and Twinkies that constitute the basic food groups of the tech set. Since you’re apparently a bit of a pop-culture buff, you doubtless know that the name of the product is a wink and nod to Soylent Green, a futuristic thriller in which Charlton Heston was shocked to find that the titular food substance was made from — wait for it — human body parts.

Speaking of crimes against nature, I got a real kick out of the recent dispatch from the front lines of the annual South by Southwest confab in Austin, Texas, which celebrates all things tech. Soylent was featured as a barbecue sauce, which it turns out was a serious tactical error in the brisket-loving Lone-Star state. The snafu was reportedly compounded by its other appearance in Soylent-infused cocktails. The local foodie community was not amused, and neither was the newsroom of Eater Austin, where one staffer mused about the apparent contradiction of commingling Soylent with real food.

As you point out, the primary challenge faced by all these lab-generated foods is that they are woefully out of step with the tenor of our time, which prizes the real, the natural and the authentic. When consumers say they want the story of their food, they mean warm-and-fuzzy romance, not science fiction. As long as we have land and water resources enough to sustain our current food supply, these experiments will remain scary, suspect and sinister oddities.

Yes, I completely understand that long-term concern for our agricultural sustainability is what has given rise to many of these products, but all you have to do is look at the misinformation, disinformation and hysteria surrounding genetically-modified foodstuffs to realize it will be impossible to realistically assess their efficacy in our current environment.

One last thought: If we get to the point of mass-market introduction by Memphis Meats and others of its ilk, I would strongly suggest they not launch themselves into the school foodservice sector, which has become a bit of a boneyard for out-of-the-box innovation.

I recall that the brouhaha over product irradiation as a means to guarantee safety boiled over when it was discovered that irradiated food was turning up on school lunch trays. Similarly, the entire, unfortunate LFTB debacle, which centered around lean, finely textured beef, snarkily dubbed “pink slime” by uninformed media types, was amplified by angry mommy bloggers who discovered the stuff, which was totally benign, by the way, in school cafeterias.

Consumers are understandably touchy at the thought of kids being used as unsuspecting guinea pigs. I think a key takeaway here, Bret, is that the marketing savvy of many of these new-age product developers is simply not on par with their food-science expertise.