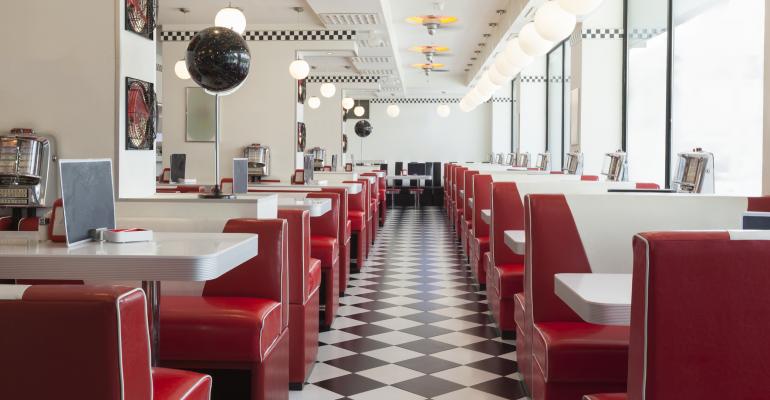 Kruse, Thorn ask if the retro trend has gone too far

In a monthly series, menu trend analyst Nancy Kruse and NRN senior food editor Bret Thorn debate current trends in the restaurant industry. For this installment, they discuss trends that are making everything old new again. I was thumbing through the Sunday paper when I came across a story about the growing number of hotels that are adding record players and vinyl records to their list of amenities meant to amaze and amuse Millennial guests, one of whom duly proclaimed that he’d never actually seen a real live record player before.

Soon after, I came across a story about the return of flocked Christmas trees, the kind that come covered in fake snow and were all the rage in the “Leave it to Beaver” era. It turns out that the Kardashian sisters, “well known for their love of the holiday season,” all favor flocked trees. It warms my holiday heart to imagine them playing Christmas albums on their record player under the snowy boughs.

What does this have to do with restaurants? Well, Bret, between the two of us, we’ve seen our fair share of fads cycle through the industry. Nonetheless, I find myself in a perpetual state of eyeball-roll these days as one breathless press release after another touts the hot new thing, which is very frequently a gussied-up old thing. My sense over the recent past is that many menu and concept developers would be out of business if not for recycled retreads from earlier eras.

Exhibit A consists of classic dishes given a contemporary twist to appeal to young hipsters, who would not otherwise order something favored by their parents. Surf and turf, which traditionally combines steak and lobster tail, burst onto the dining scene amidst a flood of post-World War II affluence and optimism. It has been reimagined in myriad ways, including the Surf N Turf Roll with steak, lobster, blue crab, cucumber and sweet chile at Sushi Cafe, which features modern fusion cuisine in Little Rock, Ark.

Similarly, escargot popped up in Continental fine-dining temples in the 1950s and ’60s, their generous coating of butter, garlic and parsley inviting squeamish customers to throw culinary caution to the wind. Today’s diners are often disarmed by their pairing with pasta, as with the Escargot Ravioli with bacon-tamarind sauce at Girl & the Goat in Chicago. Bret, I’ve said it before and I’ll say it again: You can get the American diner to try absolutely anything if you throw it on a bed of pasta.

Then we have Scotch eggs, which are said to have originated in 18th century London and are currently in vogue here. This simple pub grub wraps a boiled egg in sausage meat and coats the whole thing in bread crumbs before being baked or deep-fried — unless you’re dining at Outlook Kitchen & Bar in Boston, where the Duck Confit Scotch Egg is served with pickled shallots and truffle aïoli.

Then there are the nerdy-cool items like Jam Toaster Tarts at Publik Coffee Roasters in Salt Lake City and the Lemon Rosemary Tots at Tom’s Urban in Las Vegas.

Exhibit B is a list of restaurant concepts straight out of the way-back machine. Food halls, which are proliferating all over the landscape, are yesterday’s food courts with Instagram-friendly foods and artisanal beer. Rooftop bars, all the rage in urban environments, represent patio bars moved upstairs, minus the bus fumes and car horns. Eatsa, which has garnered all kinds of attention, bills itself as a fully automated restaurant chain. As you noted in your article on the brand, Bret, it is really a latter-day automat with iPads.

And please don’t get me started on tiki bars, those temples of faux-Polynesian frou-frou that my grandparents thought were the bomb. Trader Vic’s and Don the Beachcomber, leading practitioners of the art, date back to the 1930s and deserve credit for introducing campy cultural icons like umbrella drinks and tiki torches. As an aside, I’m surprised the cultural-appropriation police haven’t caught up with them yet; maybe they’ve been sidetracked by one Mai Tai too many.

Anyway, among my favorite new-age tiki joints is Chicago’s Three Dots and a Dash, part of the Lettuce Entertain You Enterprises stable of concepts created by Jerrod and R.J. Melman, who are masters of Millennial coolness. The drink list boasts the eponymous cocktail, which is Morse code for the letter “V,” as in victory, and is made with a couple of rums and various fresh fruits. Beverages are served in suitably campy barware, like glass skulls, wooden bowls and coconuts, and are topped with suitably garish garnishes, like baby orchids, sugar cane and exotic greens. The menu is brief and boasts — wait for it, Bret — a Pu Pu Platter that comprises trendy yucca fries and Thai fried chicken alongside time-tested, tasty and totally ersatz King Crab Rangoon.

By now you’re probably wondering where I’m going with this, and it all leads to my question. Namely, if we leave true ethnic food aside for the moment, is there anything really new in our business? Is this relentless focus on the past covering up a lack of innovation on the parts of current-day menu and concept creators? I’m curious if you’ve seen anything lately that struck you as truly original? Improving on the past You forgot deviled eggs, Nancy, and none of the ones I’ve had in restaurants taste as good as my father’s, which were made with store-brand mayonnaise, yellow mustard and Lawry’s Seasoned Salt.

But, to answer your question, on one hand, it’s a restaurant’s job to provide food and service in exchange for currency, and there are only so many ways to do that. Even true ethnic food has been available in the past. In my hometown of Denver — not, until recently, known for avant-garde cuisine — in the 1980s I was eating doro wot with injera at The Ethiopian Restaurant on East Colfax (which is still open) and miang kham at Chao Praya Thai in Commerce City, Colo. (which closed long ago).

Both served delicious food that was too spicy for some customers, because the chefs didn’t know you were supposed to dumb down the cuisine for the mainstream. Then more ambitious restaurateurs got hold of those cuisines and we ended up with Thai chicken pizza.

But on the other hand, sure, lots of things are new. Restaurants didn’t used to smash up avocado and spread it on toast. They didn't put quinoa in a bowl and cover it with seemingly random meat and vegetables. But they did put other things on toast and serve food with grains in bowls, so I guess it depends on how you look at it.

Even your illustrations are new in a way: Surf and turf didn’t used to be served as a sushi roll, and Scotch eggs didn’t come with truffle aïoli. It’s possible that Trader Vic made his own orgeat for his signature Mai Tai, but I doubt it. However, plenty of bars do these days, including Flora in Oakland, Calif.

There are some technology-related things that are arguably new, like mobile payment, which also, arguably, is just another way of paying for things, and therefore not new. A colleague is currently writing about a restaurant that’s using facial recognition technology to remember customized orders (I’d say which restaurant, but I don’t want to steal his thunder). In a way, that’s new, but also not: When I was a waiter 30 years ago, I would recognize the faces of my regulars and know, for example, that they liked dry rye toast and grape jelly.

What else is new? Earlier this week I was talking to Andrew Little, the chef of Josephine in Nashville, Tenn., who’s using his stove’s hood to smoke-dry various vegetables, like kale that he soaks in brine for a day and then turns into a variation on the Japanese seaweed kombu — he calls it kale-bu — to flavor soups and whatnot.

Talk about cutting down on waste: He’s not even wasting smoke.

I’d never heard of anyone doing that before. Then again, our stone-age ancestors probably did something similar.

Ditto for vinegar. It’s possibly the oldest man-made flavoring agent in the world, but these days more chefs are making their own or relying on local artisans to do it, and using it instead of citrus to add acid to food. There are two benefits to that: It’s local, and in most parts of the country citrus isn’t, and different vinegars allow chefs to sour their dishes with a bit more nuance.

But in pre-industrial times I’m sure local vinegar was made and used all the time.

Then there’s snow ice, also known as shaved cream — that lighter-than-air frozen dessert that has been on the West Coast for some years and is now spreading. It’s from Taiwan and Korea, so it’s not really new, but I’m a big fan.

And Thai rolled ice cream, for which ice cream base is poured on a super-cold anti-griddle and rolled into a tight cylinder. Chefs polled by the National Restaurant Association this year pegged that as a big trend. That’s kind of new, but also, it’s ice cream, which isn’t new at all.

Ultimately, Nancy, there’s only so much you can do with food. We can cynically look at each new fad as a variation on an old one — which inevitably it is — as I’m inclined to do, or we can enjoy the nuances of the latest iteration and celebrate chefs and restaurateurs continuing creativity.

We all stand on the shoulders of our ancestors, having learned from their creations. It’s our job to take that heritage and improve upon that. I think many of the world’s great chefs are doing just that.