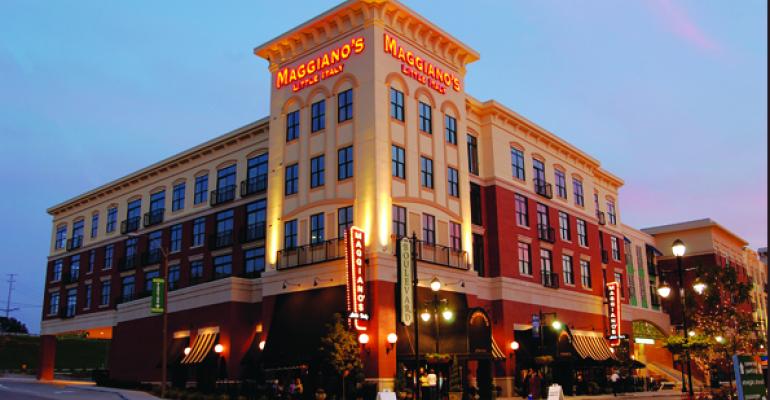 How Maggiano’s dropped calories, kept flavor on its menu

Maggiano’s Little Italy is known for its rich, indulgent Italian food, but the chain made a move in a different direction with the Sept. 8 introduction of its Lighter Take menu.

The new menu features 11 of the Brinker International concepts’ dishes reformulated to have a third fewer calories or less.

The process started about a year ago, when corporate management started looking for new sales opportunities. “One [opportunity] was people wanted another reason to dine [at Maggiano’s] that wouldn’t put them in a food coma and was a little more healthy,” senior director of culinary Keith Brunell said, adding that they wanted the same food, but better for them. “They didn’t want a calorie statement or low-fat marketing.”

So culinary innovation chef Jeff Mann was sent to the kitchen with marching orders to cut calories wherever he could without shrinking portion sizes or affecting the flavor.

So Mann examined the breading, the pasta and the sauces that were being used in Maggiano’s scratch kitchens and reworked them. The result: He knocked 810 out of 1550 calories from the Chicken Parmesan to create the Lighter Take version with 740 calories. Chicken Piccata dropped from 1180 calories to 580, and Fettuccine Alfredo went from 1570 calories to 850.

The Lighter Take items haven’t replaced the originals, nor are they on a separate menu. Instead, they’re listed right below the original menu item, with their calorie counts beside them. Lighter items and original items are the same price.

Mann examined the flour that’s used to coat the chicken breast in the Chicken Piccata before it’s seared and ended up replacing it with panko breadcrumbs mixed with herbs, lemon zest and Parmesan cheese. He ground all of that “like you would a flour” and uses it instead of flour, resulting in less absorption of oil into the chicken and more “vibrant, fresh lemon and parsley flavors.” He also developed a “char crust” to put on chicken Marsala that contains coffee, oregano, parsley and smoked salt to add flavor without calories.

Mann also lowered butter levels in sauces and enhanced them with chicken stock instead. When it came to pasta, he switched to fresh hand-cut fettuccine from dried pasta, which is par-cooked and then tossed in oil at service, adding additional calories. The fresh fettuccine doesn’t require added oil and looks bulkier, so less is required for a satisfying-looking portion.

For the Taylor Street Baked Ziti, which has Italian pork sausage, tomato sauce and an Italian cheese blend, he replaced the pork sausage with chicken sausage and introduced lighter cheeses, such as ricotta and mozzarella.

In their first week on the menu, the new items did well, outselling their full-calorie counterparts and comprising a little more than 20 percent of total items ordered. That meant people were switching from popular classic pastas and the popular dinner-for-two Marco’s Meal to the Lighter Take options.

“Now guests are telling us they want more low-calorie items,” Brunell said, so they’re working on reformulating more challenging dishes, such as lasagna and eggplant Parmesan.

Currently, lighter versions of those dishes would take between 10 minutes and 12 minutes to prepare, which is longer than their guests are willing to wait.