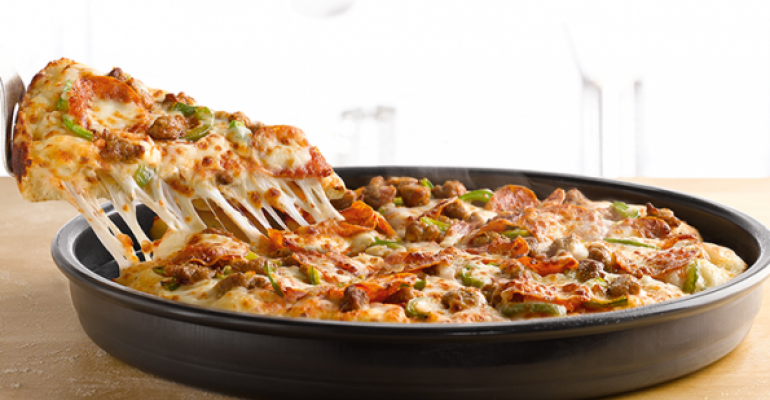 “Now we have a great answer for that.”

The Louisville-based pizza chain is introducing Papa John’s Pan Pizza on Monday in what the company is calling its biggest product launch in more than a decade.

The chain has spent the past 18 months developing the recipe and the cooking process, and preparing operators for making a pizza that takes longer to prepare than its traditional crust version.

Yet company executives believe the new product could generate strong sales in the ultra-competitive pizza business.

“We have aggressive thoughts in terms of sales,” Muldoon said in an interview with Nation’s Restaurant News. “Based on test stores, we’re getting incremental sales. Existing customers are coming in more frequently. It’s also driving a significant percentage of new customers.”

A group of consumers who strongly prefer pan pizzas, or heavy pan users, are more likely to visit a concept that sells pan pizza. The new product, therefore, expands the chain’s customer base to include that group.

Papa John’s did have a pan pizza in its system more than a decade ago. But Muldoon said the product was sub-standard. “It did not perform to our expectations,” he said. “At the end of the day it didn’t meet our better ingredient, better pizza quality standards.”

Yet, Muldoon said, “This one is a lot different. It’s taken us 18 months to get to this point. We really wanted to develop a pan pizza with a clear vision that was better than the competition.”

The company took some time to develop a crust that is crisp on the outside and fluffy on the inside. The pizza also includes a variation of Papa John’s pizza sauce, toppings, and cheese all the way to the edge along with a caramelized cheese crust.

The crust was vital, given its obvious importance in a pan pizza and to customers who prefer the product. “It took us quite a while to develop the receipt and deliver on some of the attributes customers want,” Muldoon said.

The company also had to get the cheese working well with the crust to deliver the right balance of flavor and texture. “There were literally hundreds of iterations to get to this gold standard I’m describing,” Muldoon said.

The chain then had to test the product in the field, which was the biggest challenge, but likewise important.

“If you think about pan pizza, it’s a heartier product, thicker, and requires a longer bake,” Muldoon said. “To make that work operationally alongside hand-tossed pizza in 3,500 stores in 50 states. We had to test that through in many markets here the last several months.”

New equipment for a new product

Solving that problem was complex, Muldoon said. In many cases, the solution involved new ovens. Many operators had to buy ovens specifically devoted to the pan pizza. Others with three or more ovens instead devoted one of the ovens to pan pizza. In other solutions, Muldoon said, the company worked with its oven supplier to ensure both forms of pizza cooked well.

Still, the company believes this could be a big product that represents more than 10 percent of sales. It’s a permanent product, not a limited time offer.

The ad also offers customers the ability to try a three-topping pan pizza for $10.

The company will also run digital, print and social media ads and has a new box to promote the pizza.

“This is the largest new product offer we’ve had in 10 years,” Muldoon said.