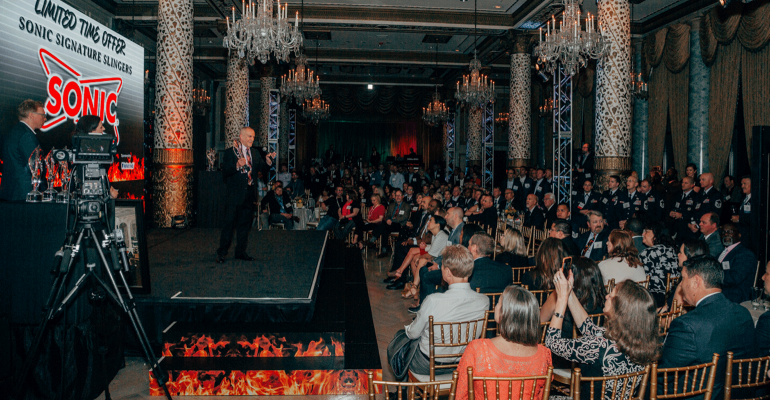 Typical Lyonnais food was served beside burritos stuffed with queso and French fries, protein-heavy noodles and churrasco lamb as, for the 21st year in a row, foodservice industry leaders gathered to honor excellence in menu development at the annual MenuMasters Awards ceremony, presented by Nation’s Restaurant News and sponsored by Ventura Foods.

The Lyonnais food — quail ballotine with crudités dressed in colza, or French canola oil — was served by Daniel Boulud, the New York-based French chef who has helped transform fine dining in the United States and who was inducted into the MenuMasters Hall of Fame this year.

The staff at the Drake Hotel, which hosted the event, paired Boulud’s dish with a 2014 Dauvergne Ranvier Luberon from France’s Rhône region at the annual walk-around tasting event and awards ceremony.

The annual awards program covers the gamut from fine dining to quick service, acknowledging culinary excellence wherever it is found. This year, for the first time, a supermarket was among the honorees. Kroger Co., was named Trendsetter of the year for its Innovation Kitchen, where meal kits, grab-and-go items and hot food are prepared, as well as for its restaurant concept, an American comfort food venue called Kitchen 1883, the second location of which is slated to open soon.

In accepting the award, Daniel Hammer, vice president of business and culinary development, said the restaurant was named for the year the first Kroger grocery store opened. He thanked Paul Sturkey, Kroger’s culinary development chef, for having the vision of the American comfort food restaurant that became Kitchen 1883, and Christopher Bushelman, the restaurant’s executive chef, for handling day-to-day operations. That included the food they served at the MenuMasters gala: Pan-roasted pork tenderloin with bacon-onion jam and mustard jus, paired with a German weissbier from Munich, Germany called Hacker Pschorr.

At the gala, they served two pastas from the line: Chickpea rotini with roasted garlic, tomato, mozzarella and balsamic gastrique as well as red lentil penne roasted vegetable primavera. They were paired with a Terlato Pinot Grigio from the Italian region of Friuli-Venezia-Giulia.

Robert Landolphi, the university’s assistant director of culinary development said the development of the low-carbohydrate items was simple: “College students have always loved pasta. What they don’t like is the Freshman 15.”

Television personality Fabio Viviani, who operates 15 restaurants as well as a variety of retail products and other ventures, accepted the award for Innovator of the Year, and also served the culinary talk of the evening — gnocchi with truffle cream, fried sage and crispy pancetta, which the Drake paired with Chianti Classico.

“I just work really hard, and usually you don’t get prizes too often,” he said, adding that the award should really go to the people working in his restaurants.

Best New Menu Item went to Del Taco for its Epic Queso Chicken Burrito, which the Drake paired with a watermelon Margarita.

The chain’s research and development director, Anne Albertine, extolled the award-winning burrito’s virtues as being emblematic of southern California, with the French fries wrapped in the chicken-queso burrito — a San Diego custom — as well as the new clean-label queso with unique acidic and spicy elements. She also thanked Ventura Foods for developing the MenuMasters awards. Best Limited-Time Offer went to Sonic Drive-In for its Signature Sliders, which are made with 25 percent mushrooms, allowing for a lower carbon footprint and lower calorie count, while arguably enhancing the burgers’ umami flavor.

Vice president of product innovation and development Scott Uehlein said he was honored to represent the first chain in the quick-service segment to offer a “blended burger,” a concept developed with the Mushroom Council and The Culinary Institute of America and further popularized by the James Beard Foundation, all of whom he thanked. Apparently unable to resist using a mushroom pun, he thanked Mushroom Council CEO Bart Minor for his support, and said, “We now know that you’re a fun guy.”

Walk-On’s Bistreaux & Bar won the award for Best Menu Line Extension for an array of menu innovations in 2017 that underscored the chain’s southern and Louisiana heritage while preparing it for further expansion in the rest of the country.

In accepting the award with corporate chef Mike Turner, CEO Brandon Landry recounted how he conceived of the idea of the restaurant when he was a walk-on basketball player at Louisiana State University. He showed the audience the napkin with an initial sketch of the idea, noting they forgot to put a kitchen in it.

Turner and his team served duck and andouille gumbo over white rice, along with poke-style ahi tuna nachos with avocado crema and peppadew-cilantro glaze on a fried tortilla chip. They also served Voodoo Shrimp & Grits, for which the shrimp was glazed in a sweet chile sauce. It was all paired with a Château St. Michelle Eroica Riesling from Washington’s Columbia Valley.

Fogo de Chão won the award for Best Menu Revamp for its Bar Fogo, a line of burgers, bar food and individual meat portions, instead of the all-you-can-eat churrasco experience enjoyed in the restaurants’ dining rooms.

They served empanadas, lamb chops and braised beef rib sliders paired with a Strawberry Hibiscus Caipirinha and the Brazilian Gentleman, made with bourbon and mango-pineapple purée and topped with a Port floater.

Selma Oliveira, the chain’s chief people and culture officer, brought three of the chain’s gaucho chefs, who both prepare and serve the food, while director of food and beverage innovation Stuart Rackham managed the restaurant’s station.

Boulud, apart from his induction into the MenuMasters Hall of Fame, was presented with a painting of his flagship restaurant, Daniel in New York City, by artist Mark Andrew Bailey, who signed prints of the painting that were given to party attendees.

Boulud joked that the number for reservations at Daniel were on the back of the painting, and also praised the other honorees.

“I’m impressed by all the winners before me,” he said, observing their enthusiasm in supporting their menu items. He also praised their hard work in providing food at high volume and low prices to customers, as opposed to “Daniel, where we charge more and do less.”

He also brought two of his young chefs on stage, Nicole Thomas, and Yong Sangsong, to indicate the importance of fostering young talent.

The theme of this year’s MenuMasters celebration was “It’s all about the food.”

Boulud said, “Today it’s all about the food, and for me, food of course is about love.”