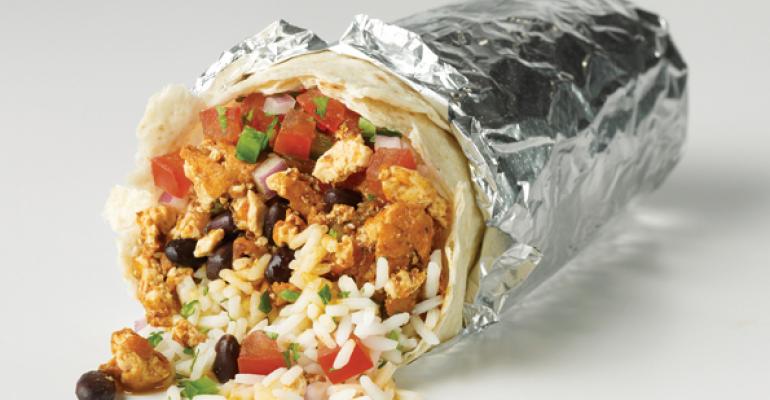 Chipotle Mexican Grill is rolling out its tofu-based Sofritas nationwide as a protein option in burritos, tacos, burrito bowls and salads served at the 1,600-unit fast-casual chain.

First tested last February in the San Francisco Bay Area, Sofritas is made from organic tofu made by Hodo Soy Beanery in Oakland, Calif., and flavored with tomatoes, chiles, cumin and other spices.

The goal of the Sofritas offering is to be vegetarian- and vegan-friendly, while also appealing to meat eaters, Chipotle spokesman Chris Arnold said.

“Many of our customers, we’ve realized, are vegetarian or vegan, or generally meat-reducers or concerned about their diet and questioning about how the animals are raised and how much meat they should be eating,” Chipotle founder and co-chief executive Steve Ells said. “And the amount of vegetarian burritos that we serve at Chipotle has increased over the years.”

Sofritas will be available starting Monday in the Boston and New York markets, but Arnold said no hard timeline had been set for a systemwide rollout for Sofritas. The item has been introduced throughout California, and was then gradually introduced to other markets, including the Mid-Atlantic. With the introduction of the option in New York and Boston, it will be available in more than half of the chain’s restaurants.

The Sofritas filling is Chipotle’s first new menu addition since the chain introduced salads in 2005. Ells said the item was derived from a tofu offering at sister chain ShopHouse Southeast Asian Kitchen, which has six locations in the Washington, D.C., area and Los Angeles. Both the ShopHouse item and Sofritas were developed by chef Nate Appleman, who heads Chipotle’s culinary development team, according to Ells.

Arnold noted that at restaurants where Sofritas is available, about 3 percent of total sales are vegetarian. About half of those sales come from customers who ordinarily would have ordered meat — mostly chicken.

Unlike other quick-service restaurants that attract customers with new items and limited-time offers, “we’ve stayed focused on the same menu — pretty much burritos and tacos — and a variation of the kinds of ingredients we put in them, for the last 20 years,” Ells said.

The chain has instead focused on improving the quality of the ingredients it uses as part of its Food with Integrity corporate philosophy, he said. That includes using naturally raised chicken, pork and beef, and trying to increase the amount of organic beans it purchases.