“Farmed and Dangerous” takes a satirical look at industrial agriculture

Chipotle Mexican Grill is getting into the television business with an original comedy series on Hulu designed to convey the chain’s stance on industrial agriculture without any explicit branding.

“Farmed and Dangerous,” a four-episode series that takes a satirical jab at the evils of corporate agribusiness, is scheduled to debut on Hulu and Hulu Plus on Feb. 17.

The series follows a fictional industrial giant called Animoil that develops a new petroleum-based animal feed called PetroPellet. The product promises to reduce factory farm dependence on oil by eliminating the need to grow, irrigate, fertilize and transport vast amounts of feed needed to raise livestock. There’s only one downside: the cows that eat the pellets have a tendency to explode (with cheap but amusing special effects).

Ray Wise (“Twin Peaks,” “Mad Men,” “24”) plays Buck Marshall, the “spin master” from the Industrial Food Image Bureau (IFIB – get it?) who is tasked with damage control. To keep exploding cow videos from going viral, he recruits his beautiful (and, we assume, equally evil) daughter to seduce the noble and good-looking small farmer named Chip, who threatens to harness the power of social media to expose Animoil’s dirty deeds.

Mark Crumpacker, Chipotle’s chief marketing and development officer, said the series is an attempt to reach consumers that may not be following the national debate about food production. 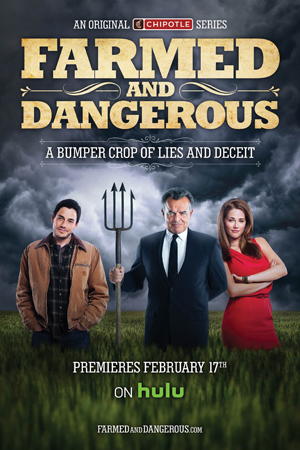 “Much of our marketing is aimed at making consumers more curious about where their food comes from and how it is prepared,” said Crumpacker in a statement. “By making complex issues about food production more understandable — even entertaining — we are reaching people who have not typically been tuned in to these types of issues.”

Though Chipotle produced the series in partnership with the New York-based studio Piro, it has no apparent mention of the fast-casual burrito chain.

According to the New York Times, Chipotle is mentioned only once in the series, when the sinister Marshall character boasts about spreading a false rumor that McDonald’s and Chipotle are still linked. McDonald’s held a controlling stake in Chipotle for about eight years before divesting in 2006, when Chipotle went public.

“We think of ‘Farmed and Dangerous’ as a values-integration rather than typical product-integration,” said Crumpacker. “The show addresses issues that we think are important — albeit in a satirical way — without being explicitly about Chipotle. This approach allows us to produce content that communicates our values and entertains people at the same time.”

The move follows Chipotle’s success with the introduction of animated short films over the past few years that were promoted in movie theaters and online, as well as a video game, all with similar themes that highlight the Denver-based chain’s efforts to promote the quality of its ingredients.

Chipotle, for example, said it uses “Responsibly Raised” meats from animals that are humanely raised without antibiotics or hormones; dairy from pasture-raised cattle; and produce that is locally or organically grown without genetic modification.

Last year, the short film “Scarecrow” depicted a scarecrow’s journey to bring wholesome food back to the people by providing an alternative to the processed food that dominates his world. In 2011, Chipotle’s short “Back to the Start” was about a fictional farmer’s choice to move back to sustainable farming methods.

Chipotle isn’t the first restaurant chain to turn to television and web series to promote its brand. In 2012, KFC launched an online branded-entertainment series, called “Growing Up and Getting Out,” on Comedy Central.

Denny’s has an online series called “Always Open” on CollegeHumor.com featuring unscripted interviews that take place in a real restaurant. And Subway produces the short-form online comedy “4 to 9ers” on Hulu.