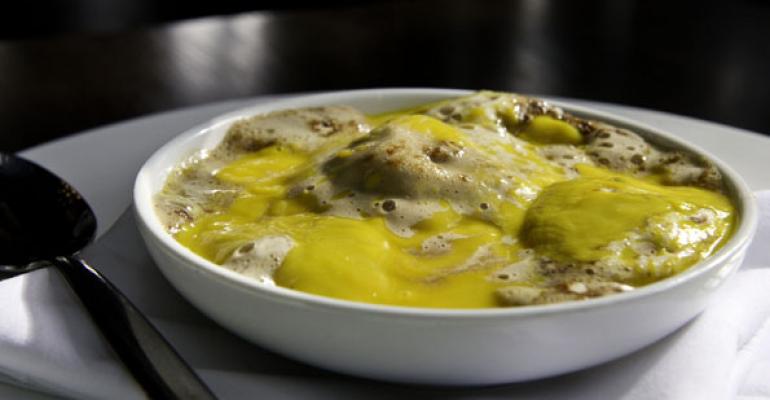 “This sounds like it’s going to be very sweet, but that charred, caramelized flavor you get from the roasted marshmallow and root beer cream balances the sweetness in the dish in a pretty interesting way,” chef Kyle McClelland said.

He starts by sautéeing butternut squash with garlic and carrots. Next, he adds vegetable stock, then thyme and bay leaf. He lets the herbs steep, then removes them and purées the mixture.

“It’s earthy and savory and sweet at the same time, and the fresh herbs brighten it up,” he said.

Pastry chef Annika Loureiro makes marshmallows by adding ground espresso beans to sugar, water and corn syrup. She brings that to a boil and pours it into agar agar — a sea vegetable used as a thickener — that has been set in water, and whips it into a fluffy marshmallow. She lets the mixture cool and then coats it in powdered sugar and more espresso powder.

“The bitterness of the espresso balances out the sweetness of the marshmallow,” McClelland said.

For the root beer cream, McClelland cooks root beer down to a syrup, adds cream and froths it, “so it’s basically a root beer-flavored whipped cream,” she said.

McClelland puts the root beer cream and marshmallows along with toasted hazelnuts in a soup bowl, chars them in the broiler and pours the soup over the top.